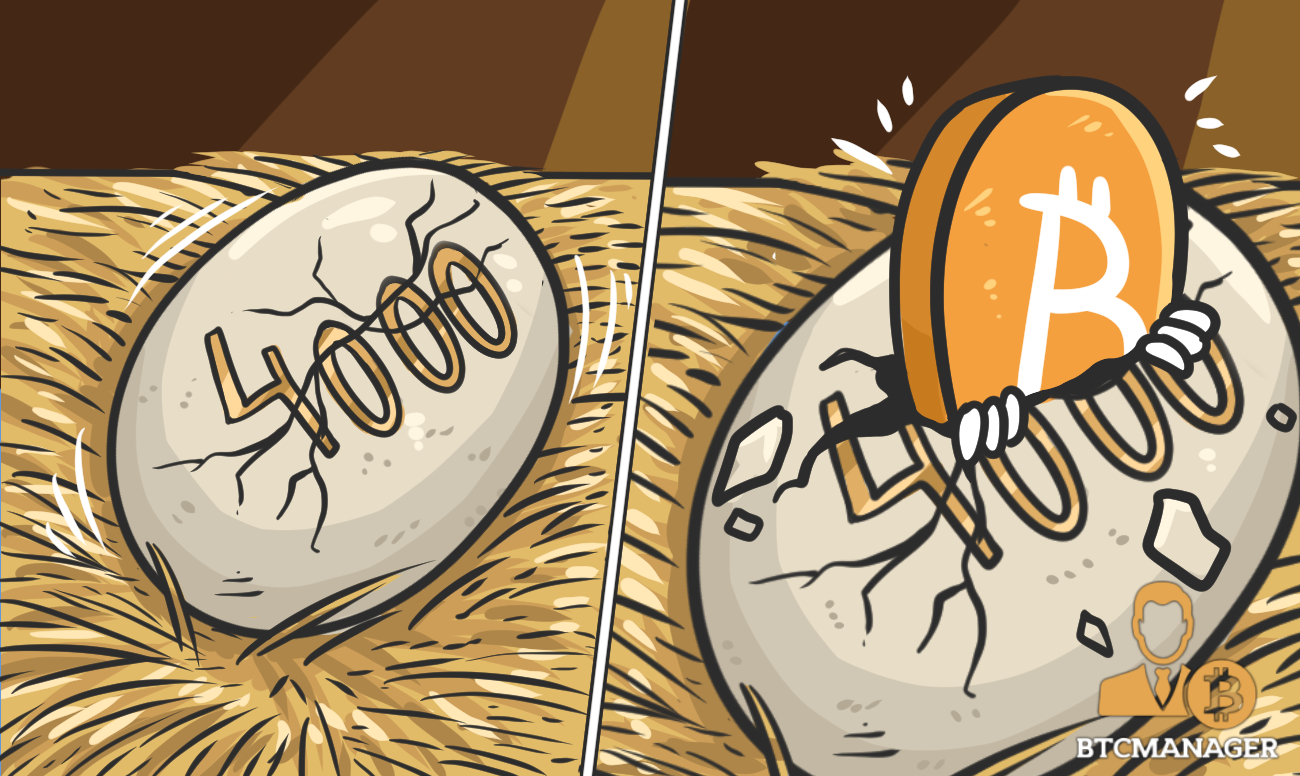 Bitcoin investors are finally getting the much-needed relief rally that saw the price of bitcoin surge past the $4,000 mark to close the week five percent higher week-on-week at around $3,900.

After almost two months in the $3,000 range, bitcoin finally broke through the $4,000 mark as traders have started to hit the buy button following a string of positive news.

The Bitcoin ETF may be back on the map after Van Eck has reapplied for SEC approval, Elon Musk has spoken positively about cryptocurrencies stating that they are a better transfer of value than cash, and Samsung has confirmed its new phone will be able to store blockchain applications and private keys.

Moreover, the Bitcoin Lightning Torch has been making the rounds on Twitter with Fidelity Digital Assets being its latest holder. While not every cryptocurrency community member is happy about a financial institution de facto joining the Bitcoin community, DFAS’ holding of the Lightning Torch is a testament of how the pioneer cryptocurrency is being embraced by Wall Street, which has the potential to bring about the much-talked-about wave of institutional investor money that could help to push the price of bitcoin to new highs.

The altcoin market has rallied together with bitcoin, with the likes of ether (ETH), EOS (EOS), Maker (MKR), and Ontology (ONT) being the biggest winners of the week, rallying by 12 to 50 percent.

An official at the Korea Exchange has revealed that the local crypto market will be affected by the decision made by the SEC regarding the Bitcoin ETF in a report by the Korea Herald on February 20, 2019.

The upcoming decision on the Bitcoin ETF is one of the most anticipated in the crypto community with many firms applying and many being denied. This is because a possible approval could signal a new wave of mainstream investments which would, in turn, turn fortunes around for the crypto industry.

Now, it seems the effects will not only be felt in America but also in other parts of the world such as South Korea. This new information comes courtesy of an official from the Korea Exchange who spoke with the Korea Herald on February 20, 2019. According to him, while South Korea has kept certain parts of the crypto industry such as ICOs restricted, it is closely watching what the U.S. will do.

The official who spoke anonymously said:

“The US has been the front-runner on the cryptocurrency market and related derivatives, and there are strong voices supporting the launch of bitcoin ETFs within the market — which is why we are observing the progress and response of the US Securities and Exchange Commission’s decision on bitcoin ETFs.”

Bitcoin ETF: SEC to Accept, Reject or Delay the VanEck ETF by April 5, 2019

Expect the crypto industry to be high on the suspense-scale for the coming few weeks as according to a federal release published February 20, 2019, the U.S. Securities and Exchange Commission (SEC) is reviewing the long-pending application for a Bitcoin ETF submitted by VanEck SolidX Bitcoin Trust.

Per the official release, the VanEck/SolidX bitcoin ETF proposal is poised for publication in the Federal Register on February 20, 2019. After publication, the SEC will have 45 days in its hands to approve, reject, or give itself more time to make a decision on the proposal. This means that the U.S. financial watchdog will have until April 5, 2019, to make a call on the fate of the Cboe/VanEck/SolidX’s bitcoin ETFs.

Further, starting from February 20, 2019, the general public will have until March 13, 2019, to make their voices heard by filing their responses to the ETF application.

It’s worth highlighting that the VanEck Bitcoin ETF proposal will be reviewed along with another ETF application submitted by Bitwise Investment Management and NYSE Arca.

The latter ETF proposal was published in the Federal Register on February 15, 2019. This entails that the SEC will have about the same time period (first week of April 2019) to make or postpone the decision on the NYSE Arca ETF application.

JPM Coin’s Emergence Poses a Threat to Ripple (XRP), but Is far from Killing Bitcoin

JPMorgan, one of the world’s largest banks, made a surprising move to get into the digital currency space by creating JPM coin, which would be used to settle transactions between clients of its wholesale payments business instantly.

The news brought a shock to the crypto space due to the bank’s strong stance against Bitcoin in the past. In September 2017, CEO Jamie Dimon once referred to Bitcoin as a “fraud that will eventually blow up.” Then only four months later, he changed his opinion and regretted calling Bitcoin a fraud, stating, “the blockchain is real.”

While the emergence of JPM coin is positive news for the banks, one cryptocurrency, in particular, has to be feeling the pressure.

Ripple’s single purpose as a company is to develop a private ledger that allows bank partners to settle transactions faster using XRP. The best-case scenario for Ripple would have been for JPMorgan to announce that they had become one of the 200 bank partners currently working with Ripple. Instead, JPMorgan chose to develop its cryptocurrency.

Now, Ripple finds itself competing with a century-old financial institution with $2.5 trillion in assets and a customer base that includes 80 percent of the companies in the Fortune 500.

On February 20, 2019, the South Korean smartphone giant announced the incorporation of “Samsung Knox” into their new Samsung Galaxy S10. The phone’s hardware security feature will enable owners to store blockchain applications and private keys which may include cryptocurrencies.

Samsung Electronics broke the news in an official release of Samsung Galaxy S10, the company’s flagship smartphone equipped with a system which can store blockchain-based private keys.

As per the announcement, the Galaxy S10, which will be available online and in stores in select markets beginning March 8, 2019, is the first HDR10+ certified device with access to the next generation Wi-Fi 6. The phone comes with the electronic giant’s pre-installed proprietary hardware called Samsung Knox designed to safeguard blockchain assets.

The company’s statement explains: “The Galaxy S10 is built with defense-grade Samsung Knox, as well as secure storage backed by hardware, which houses your private keys for blockchain-enabled mobile services.”

Elon Musk: Bitcoin Is Interesting but Tesla Isn’t Getting Involved

Unlike Jack Dorsey, Elon Musk, the Tesla CEO, isn’t ready to adopt bitcoin and other cryptocurrencies. This admission comes despite a few previous cryptocurrency-focused tweets published by Musk in the past. Even though the Tesla chief says he isn’t going to steer the company in the direction of the emerging asset class, Musk does believe that virtual currencies are the future of money.

Speaking during a podcast with Cathie Wood and Tasha Keeney of Ark Invest on February 19, 2019, the Tesla CEO described bitcoin as an interesting proposition. Commenting on the relevance of virtual currencies, Musk opined:

“Paper money is going away and crypto is a much better value for a transfer of value than pieces of paper but it has its pros and cons. It’s very energy intensive to create bitcoin at this point.”

Musk’s comments echo similar sentiments to those espoused by Twitter and Square CEO, Jack Dorsey. During a podcast with Joe Rogan at the start of February 2019, Dorsey described bitcoin as the best candidate for a universal native Internet currency.

For Musk, being borderless and almost impossible to censor, bitcoin has a unique advantage over fiat. Hence it is possible for the top-ranked cryptocurrency to operate outside the ambit of mainstream currency controls.

Japan is reportedly gathering information about the amount of interest there is among institutional investors for a cryptocurrency ETF which has the potential to lead to the approval of cryptocurrency-based ETFs in Asia’s second-largest economy. This according to a report from Irish Tech News, February 18, 2019.

Cryptocurrency exchange-traded funds (ETFs) may acquire a legal status soon if recent reports are to be believed. According to the report, the Asian country is taking significant steps to provide legal standing for crypto ETFs.

The Japanese Financial Services Agency (FSA), the nation’s financial regulator, has revealed that it is investigating how much public interest there is for this type of investment product. According to an unnamed source, it appears the number of institutional investors interested in a cryptocurrency ETF is significant enough to warrant a second look from the FSA.