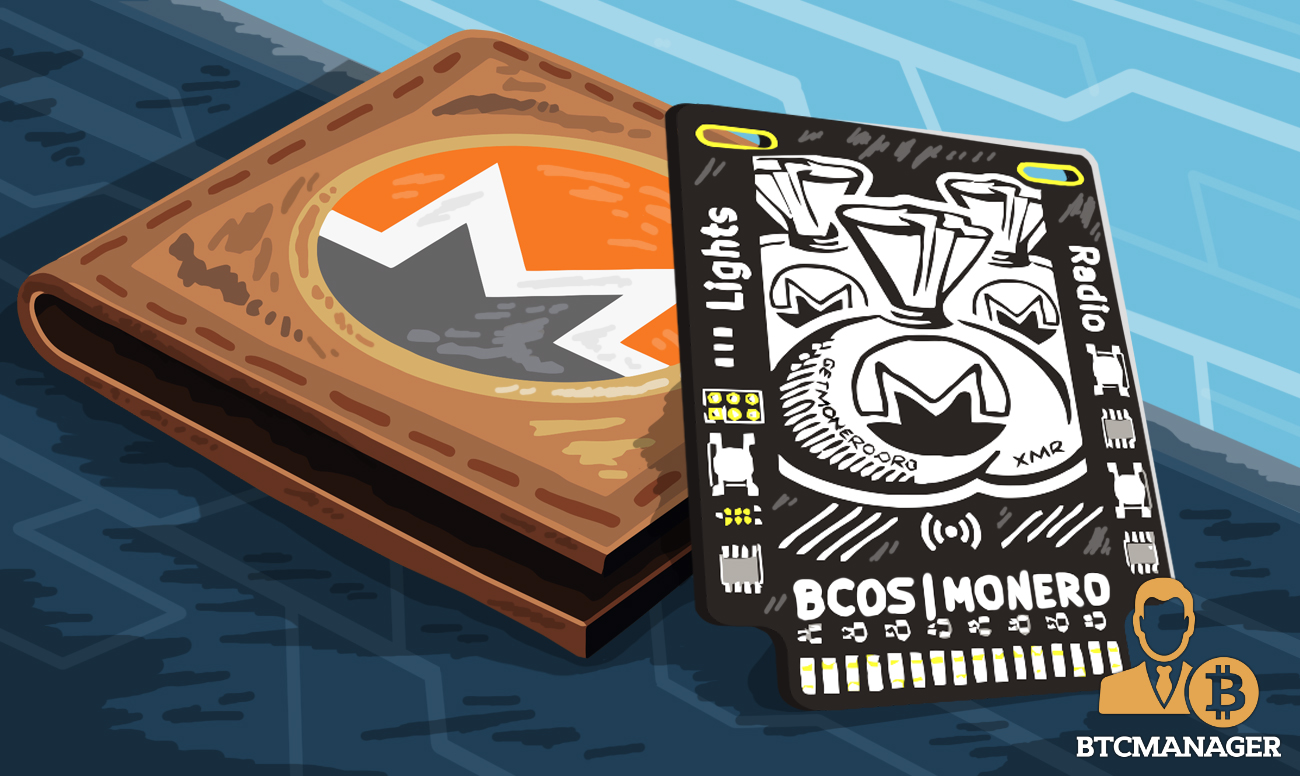 The Monero hardware project completed the first stage at the end of April, developing the internals and boards. The next stage is to develop a proper enclosure, perform injection molding and other finishing touches; the project’s funding goal is already approximately 25 percent complete. BTCManager spoke to Michael Schloh von Bennewitz, Monero’s hardware team lead, to find out more.

BTCManager first covered the Monero hardware wallet project in September 2017. With the board complete and ready to be encased, a new funding proposal was submitted to the Forum Funding System (FFS) on May 2. While the project’s primary purpose is to eventually see the creation and distribution of hardware wallets compatible with monero, another aim is to force the hands of other hardware wallet manufacturers to add the altcoin, which has not yet materialized.

The work the team has done over six months between September 2017 and April 2018 was on time and on budget, meaning that the next stage is also likely to be delivered on time and with the proposed funds. The target funding for this stage is 498 XMR, and mechanical engineers will work on the enclosure and do their own 3D printing, which will be made from a Magnesium alloy and take up around a quarter of the funds.

The board for the hardware wallet is complete; next step is to develop enclosures, with the design seen above. Image: Taiga

During mid-May, von Bennewitz will travel to China to display the technology used by the hardware wallet at the country’s DefCon. Later in August, when DefCon takes place in the States, there will be a board and enclosure demonstration.

While some things have gone smoothly, other aspects have been challenging. For instance, the manufacturers who produce chips, active components, microcontrollers, etc. are improving their stocks and creating new products, so that the Monero hardware team never know when they are going to receive what they have ordered. In these cases, workarounds and backup plans were enacted to remain on schedule.

On the other hand, von Bennewitz says that the firmware’s progress has been more than satisfactory, with a team of three to five people working on compiling firmware. Also, the budgeting for the previous cycle worked well according to von Bennewitz. As like last time, a 20 percent buffer in the funding is put in place to mitigate failure. Nevertheless, in a display of the success of the project so far, a test version will be displayed at DefCon in Las Vegas, August 2018.

NFC Radio Test Version to be Demonstrated at DefCon

The test version of the monero hardware wallet is a radio-connected device that stores arbitrary data, such as a secret spend key or public address. The prototype is an NFC badge which can transmit the data stored to a smartphone. There are a few protection features to stop the badge being used as soon as it comes into contact with NFC-enabled devices; most importantly, you have to push a button for the device to transmit data.

The badge is composed of two halves, two separate devices on a PCB. First, there is a radio circuit which does not need a battery. Secondly, there is a battery, and 16 LED lights in a matrix to give the device some aesthetics and flash the color orange. 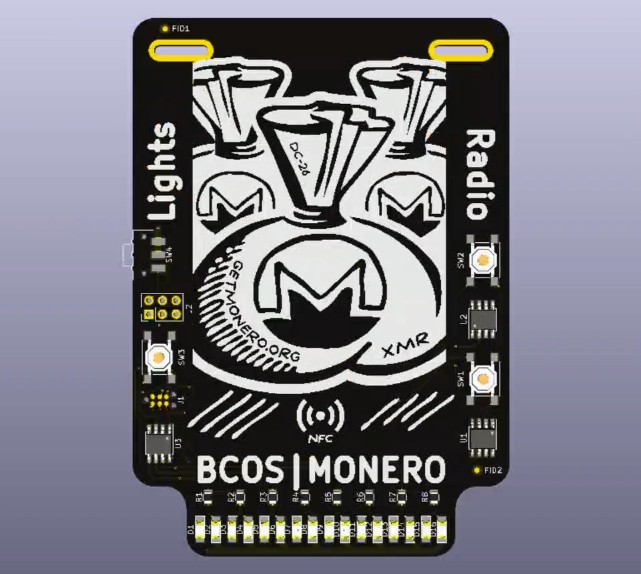 How the NFC Radio Test device will look. Image: Screenshot

Hundreds of these test devices could be ready by the time DefCon comes around, but for now, von Bennewitz says that the NFC radio test version will only be guaranteed to be available for VIPs, as they havedecided how readily available the devices can be as demand is unknown at this point.

An Intermission to the Final Product

The test device is an “intermission” to the final hardware wallet and cheap enough to hand out. In fact, von Bennewitz said in his conversation with BTCManager, that this is part of the reason he is visiting China in May, picking up three or four devices to test and see how they work. On the point of manufacturing, von Bennewitz says it is globally distributed, with activities in China, Germany, the Czech Republic, the Netherlands, the US, and the enclosures will be made in Belgium.

If all goes well with the enclosures, “the next step would be to attract even more investors to create a real company independent of the FFS.” But this would come with its own problems. For example, bringing in investors may force the project to raise the price, which is against the aims, as BTCManager previously reported that the team wants to the device to be low-cost, and to be priced at $20.

A Look Under the Hood of the Developer and Consumer Editions 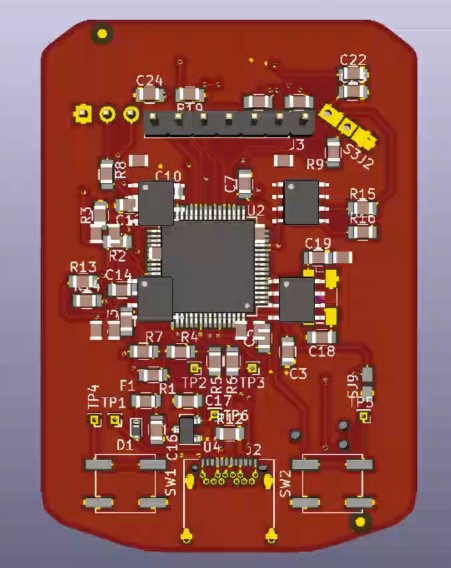 The circuitry is displayed for the consumer edition. Image: Screenshot

For instance, one feature von Bennewitz highlighted was an ambient light sensor for crossing borders, which will be able to detect if the wallet enclosure is removed. To add many more features, BTCManager was told it is not difficult, but rather “time-consuming” to find additional space on the circuit board to keep adding features. 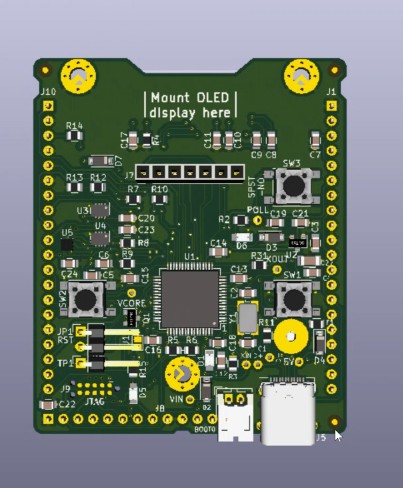 The circuit board for the developer edition is more populated as compared to the consumer edition. Image: Screenshot

Feedback from the Monero community has also been positive, with many individuals requesting more products from the hardware team, like a bearer bond similar to Opendime. Unfortunately, von Bennewitz stated that “we haven’t been able to follow up. There’s overload; we can’t have six projects in parallel.” What is more feasible, he says, is two or three in parallel, which includes the developer and consumer editions of the hardware wallet, the NFC radio test device and a steel crypto storage product that can hold your private keys.

Going forward, if everything goes to plan, we should see a demonstration video of an enclosed device running immutable bootloader by late September 2018.

It also seems that the hardware wallet project is blazing a trail for others to follow their lead. Von Bennewitz told BTCManager that Purism wants to develop a smartphone that has features of a hardware wallet – a multi-purpose dedicated secure element which can be used to sign transactions. The Monero hardware team lead also stated he is looking forward to having conversations with the team at Purism.

Regarding progress, von Bennewitz says that Purism is “a bit further behind than we are,” and stated that the technology company is the perfect partner for the Monero hardware team. He believes it will turn into a symbiotic relationship and hopes they will work together as if they are one team.

Purism announced in October 2017 that it would be collaborating with the Monero project and deliver a smartphone that would come with monero wallets pre-installed. While the Monero hardware project has friendly relations with all the hardware wallet companies, such as Ledger and Trezor, Purism are “kind of the same people” as those in the Monero project, and von Bennewitz hinted that they might even share team members in the future.