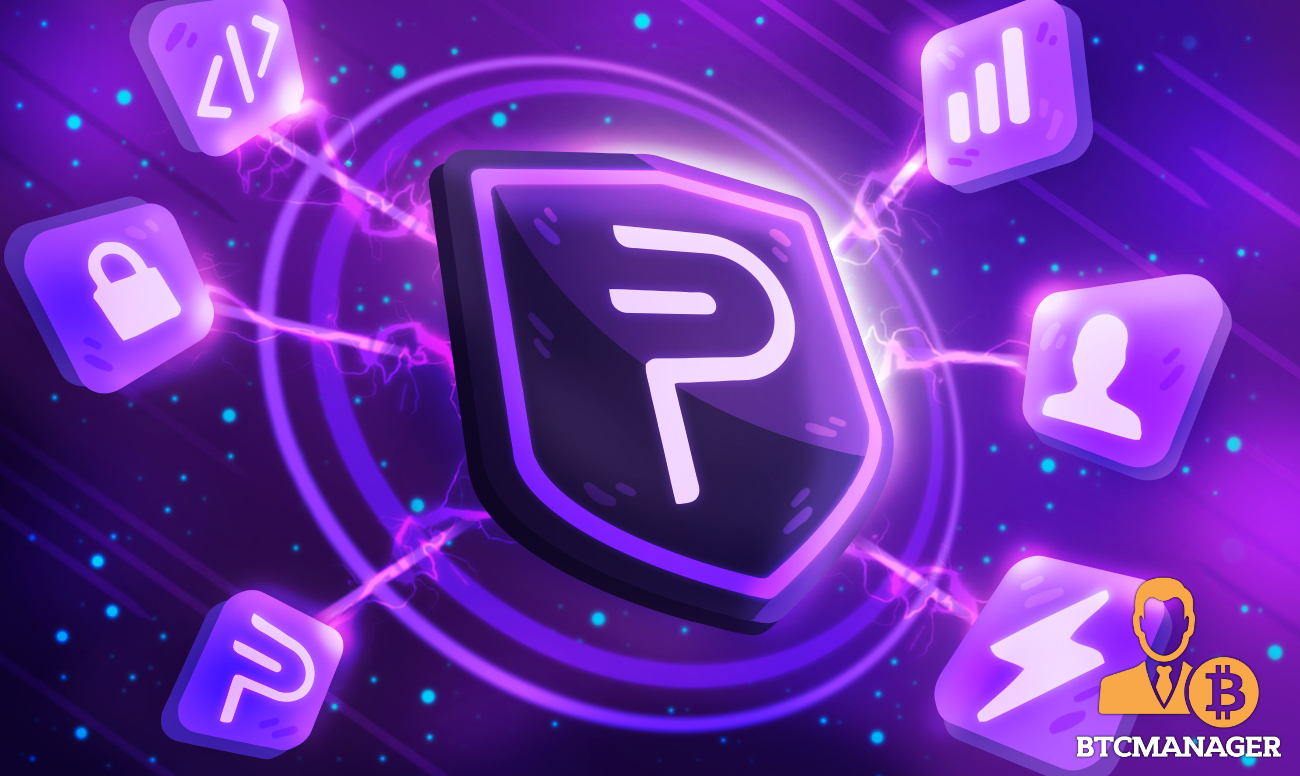 As one of the most technologically equipped and advanced blockchain protocols, PIVX is a financial user data protection-oriented digital currency that leverages cutting-edge ZK-powered SHIELD technology to give the users the liberty to choose whether they want to receive and send transparently (akin to bitcoin) or anonymously (like Monero, Dash, Zcash).

For the uninitiated, the SHIELD technology is currently running on the Proof of Stake consensus algorithm — something that the Ethereum community has been trying to implement into its network for years. In addition, PIVX is also a DAO (Decentralized Autonomous Organization) which ensures healthy decentralization across the project.

In this review, BTCManager dives deep into the various facets of PIVX. The review will look into the various innovative and robust features of this cryptocurrency, its legacy established in a relatively short-period, its predicted price action for the rest of 2021, and all that is in the pipeline for this exciting cryptocurrency.

For those not in the know, PIVX has been one of the earliest and most influential privacy-focused cryptocurrencies to exist. PIVX could be considered as the perfect alternative to several other privacy-focused digital currencies such as Monero (XMR) and Zcash (ZEC) not only due to its technological superiority but also because it is, in fact, the most robust and innovative of all privacy-preserving cryptocurrencies.

Below is a perfect example of the very first SHIELD (zk-SNARK Sapling + Proof of Stake) 100 percent untraceable transaction on PIVX’s mainnet blockchain from one shield address to another. It is worthy of note that during this transaction, there were no amounts revealed, no sender or receiver information, nor any balances from the parties involved in the transaction revealed. 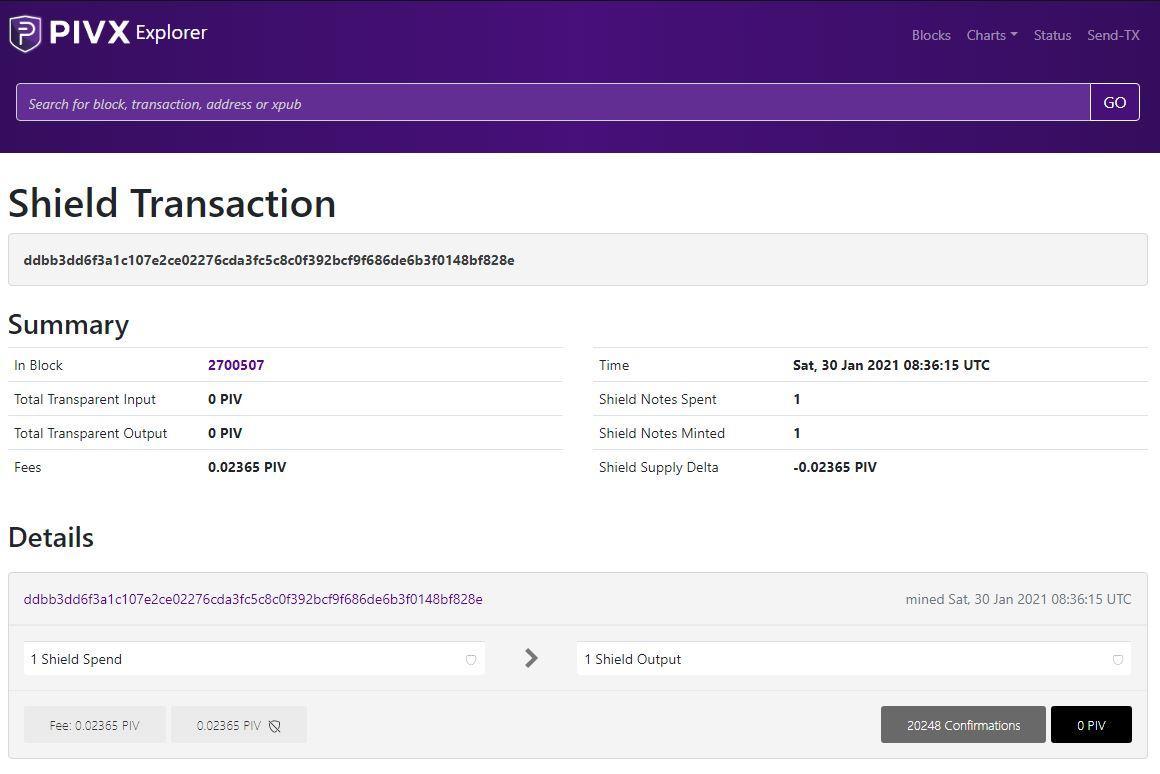 I make another attempt to explain how zk-SNARKs work, for those who are at least somewhat mathematically inclined but do not yet understand them.https://t.co/nSnYzHjCmc

Stake it in Cold Storage

Yes, you heard that right. PIVX enables its users to stake their PIVX coins while they are lying safely offline in cold storage or hardware wallets. This arrangement allows users to enjoy attractive staking rewards without having to waste a cent on electricity costs nor having to run the wallet online.

Decentralized to the Core

While the vast majority of cryptocurrencies face the criticism of having centralized ownership, PIVX’s more than 1700 active masternodes responsible for securing the network whilst ensuring adequate decentralization for the protocol. Further, the blockchain also facilitates decentralized governance by providing each masternode a voting right as part of the DAO ecosystem. Currently, masternode rewards are around 9 percent per year, with the masternode rewards available to view here.

PIVX offers its holders the benefits of a dynamic coin supply model which essentially ensures long-term balance between inflation and deflation. For those not in the know, PIVX has an emission rate of 5PIV per block + up to 1P/block for the treasury allocation. Notably, The latter is variable due to the possibility of some of the funds not allocated (e.g. proposals not accepted etc.). In that case funds would not be emitted by the blockchain. This provides dual benefits in that when there are small number of transactions on the network, the coin is inflationary, spending is incentivized, and transaction fees are low. Conversely, when the network activity is high, the coin becomes deflationary and savings (staking) are incentivized.

Moreover, with the rapid rise of usage of decentralized exchanges (DEX) in recent times, it is not too far-fetched to think that PIVX supply would only shrink further in the upcoming months and years, making PIVX an even scarcer asset with time.

DeFi, short for decentralized finance, took the cryptocurrency by storm shortly after the onset of the coronavirus pandemic in 2020 whose ripple-effects were experienced across all markets the world over.

The “DeFi summer of 2020” gave us only a taste of the immense potential this emerging landscape holds in the wider digital currency economy and PIVX, in fact, has been one of the pioneers of the DeFi before it got popular.

An original DeFi project, PIVX is a completely trustless option where users can hold their private keys and directly stake their coins, or run masternodes to earn attractive rewards. At present, staking PIVX coins gives users a healthy 8-9 percent staking rewards every year while masternodes offer 9 percent rewards per year.

In fact, it is worthy of note that PIVX has been the “first” project in various facets in terms of innovation within the cryptocurrency industry.

Notably, in August 2020, PIVX witnessed the first-ever successful implementation of zk-SNARKs based Sapling privacy protocol on PoS/Masternode blockchain. Most recently in January 2021, the SHIELD protocol was activated (block 2700500) — with the zk-SNARKs-based Sapling protocol going live.

For the uninitiated, zk-SNARKs enable the processing of transactions on a blockchain network with extreme efficiency. PIVX leverages this innovative feature by implementing it on top of a PoS consensus algorithm protocol.

This way, looking from a wider perspective, PIVX has taken the best privacy features available at present and implemented them on a PoS blockchain to do away with scaling issues, humongous energy consumption, and mitigate the risks associated with the possibility of a 51 percent attack associated with PoW. These robust features essentially capture the SHIELD protocol.

Where is PIVX Now and What’s in the Pipeline?

The reason for the slide in the rank of PIVX could be majorly attributed to an unlucky bug found in one of the Zerocoin protocol libraries called “libzerocoin” which virtually forced PIVX and various other coins using the same common library to disable Zerocoin protocol. This essentially resulted in PIVX being without its main feature for close to two years and ultimately going off the radar. That being said, such an unfortunate incident in the middle of a prolonged multi-year bear market would have been fatal for almost any other project – but not for PIVX.

The PIVX community continued to burn the midnight oil to develop a cleaner and better version of the protocol from scratch. The successful activation of the SHIELD protocol on mainnet last month is a testimony that PIVX’s ranking among the top 10 projects by market cap was no coincidence and with its ecosystem thriving with new developments day in and out, its reentry among the top crypto projects is not a question of if but when.

As for what is in the pipeline for this innovation project, there is no dearth of exciting developments.

With the launch of the SHIELD protocol, PIVX developers are already working on some of the following features slated to be released by the end of 2021 or early 2022:

PIVX team is working towards developing deterministic masternodes, that are essentially masternode lists that are fully derived from on-chain data. These masternodes will enable users to send masternode rewards to an address in another wallet while simultaneously delegating voting power to another address.

Developers at PIVX are working towards making it possible for stakers to stake even the shielded coins in addition to transparent coins. By leveraging SHIELD staking, PIVX will have a larger shield coins pool that will help increase the network’s overall privacy.

This feature would enable users to create staking pools where they don’t need to find a block to get rewarded. Specifically, the pool operator would collect all the rewards, subtract the fees, and then redistribute the remaining amount among all stakers basis the amount of delegated coins.

The logic behind this procedure is to prevent centralization of power which might be a possibility with the price of PIVX coin going up. At the same time, it would ensure the network is aptly decentralized and allows small stakers and investors to continually receive daily rewards directly into their mobile wallets or any other liquid wallets meant for quick spending. You can learn more about PIVX’s roadmap here.

In addition to the aforementioned, PIVX has continued to silently blaze the trail in terms of development, innovation, and growing into a mature cryptocurrency project.

For instance, PIVX is the world’s leading actively developed cryptocurrency in terms of GitHub commits for the past 3 to 6 months, per data from CryptoMiso.com. This is even more than that of Bitcoin.

Moreover, unlike the regulatory mishap surrounding XRP whether it is a security or not, PIVX is factually not a security as there it did not have any ICO or pre-mine. The project was fairly launched and is 100 percent SEC safe. PIVX is a utility coin and investors can rest assured about not being involved with any regulatory hurdle. Readers can check PIVX’s full regulatory and compliance disclosure here.

There has been a tectonic shift in terms of maturity and infrastructure with regard to the cryptocurrency market if one compares the bull run of 2017, early 2018 and today. Similarly, a lot has also changed within the PIVX universe.

Fast forward to 2021 and PIVX has dropped all the aforementioned dated features for the implementation of vastly more advanced and cryptographically stronger zk-SNARK cryptographic proofs.

As far as the coin price is concerned, PIVX’s price action has been nothing short of exemplary. For instance, while PIVX was trading at $0.5 during the beginning of February 2021, it made a 30-day period high of $1.87 on February 22 — a gargantuan 4x increase in less than a month, according to data from CoinGecko.

Considering the flurry of developments and protocol enhancements slated to go live later this year, sky is the ceiling for PIVX coin’s price.

To be abreast of all the latest developments in the PIVX ecosystem, follow the official website here.