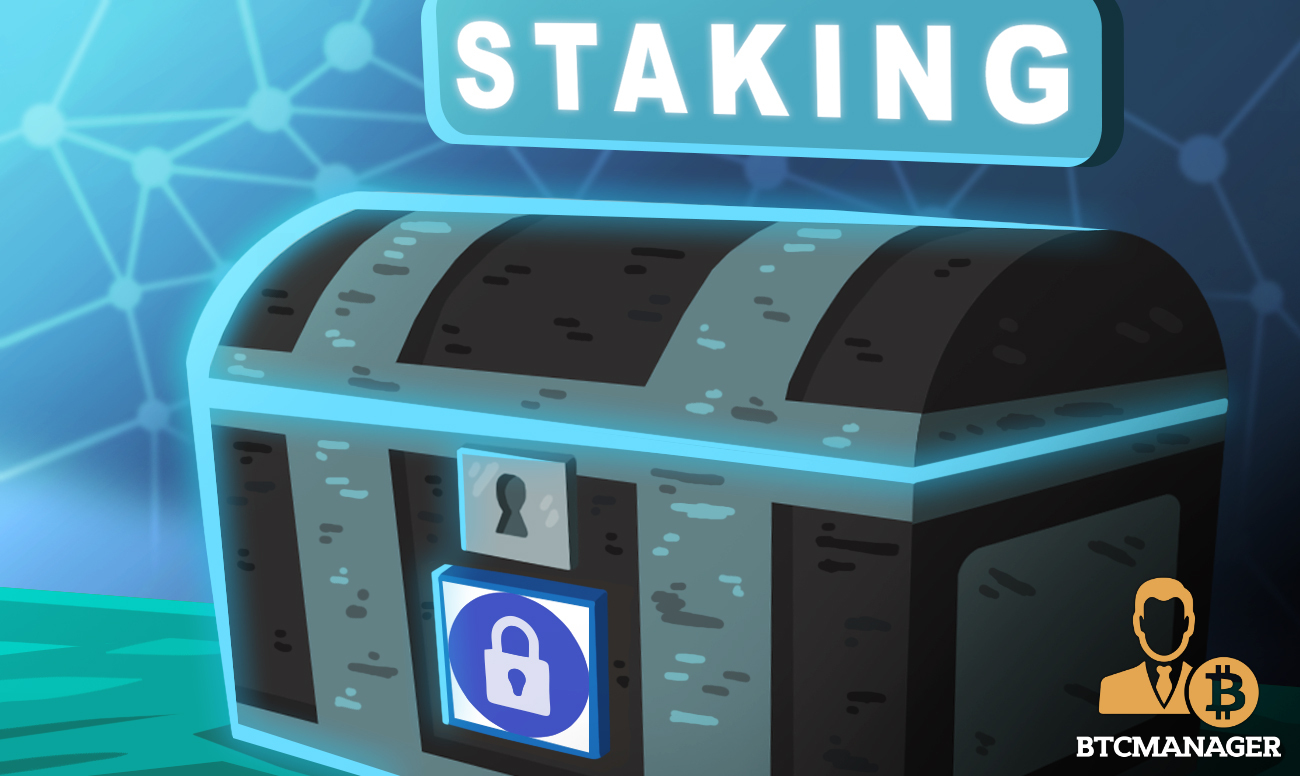 How does staking work on the Takamaka blockchain?

Blockchains based on a Proof of Stake algorithm usually employ their own particular staking currency. However networks, such as Takamaka, adopt a two-token system where rewards are distributed using the secondary token.

Not to mention that in most Proof of Stake networks, validators freeze their tokens in order to be randomly selected by the protocol at specific intervals, thus creating a new block.

The stake itself is what encourages validators to keep the network safe: if they didn’t, their funds would be at risk.

Takamaka, rather than freezing your tokens for an entire EPOCH, has developed a new PoS mechanism that allows you to spend them immediately after the valuation point.

This transaction is used to create a proxy from the holder to a mining pool.

This transaction cancels all delegations of a given holder made before the sending date.

The cloud address is called the MAIN ADDRESS, the address of each individual server that makes up the cloud or mining pool is called the OVERFLOW ADDRESS.

All stakeholder delegations (see STAKE) are directed towards the MAIN ADDRESSES 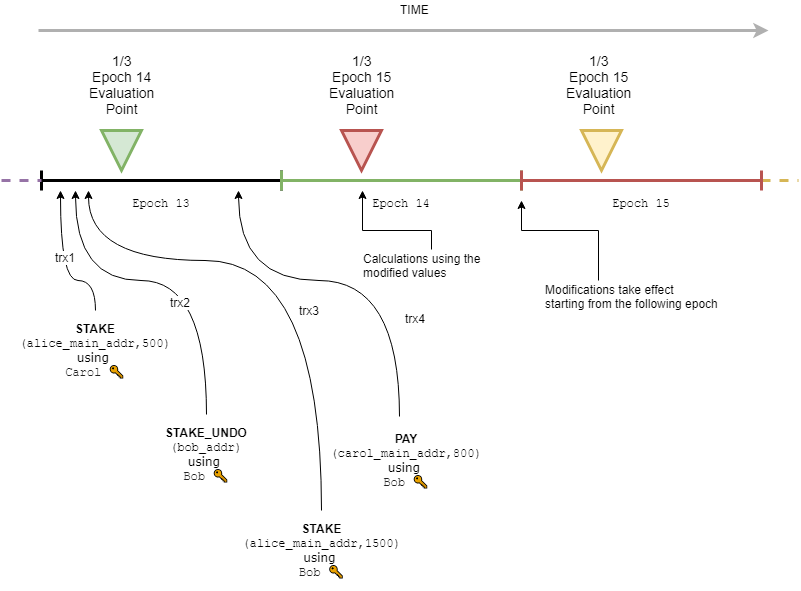 These 4 operations have no effect on epoch 13. This is because the evaluation point (indicated by the triangle) of that epoch has already passed.

The first 3 operations will take effect on epoch 14. This is because they occur before the evaluation point of epoch 14 indicated by the green triangle.

The 4th operation is assessed at the evaluation point of epoch 14, red triangle, and becomes effective from epoch 15.

Takamaka blockchain, at 1/3 of each EPOCH, takes a “snapshot” of the TKG token distribution and delegations.

It is important to note that there is no need for any extra action from the user who stakes his tokens. Each time Takamaka acquires a snapshot, it checks the number of tokens in the wallet associated with that public key that made the transaction, adds them as a stake, and all the funds are delegated to the Node.

Once the snapshot has been taken, the User will always be able to spend the TKGs, or receive more on the staking address. The tokens will never leave the Wallet nor will they ever be blocked. The network still counts for the tokens at stake for the successive EPOCH even if they were to be transferred to another wallet (resulting in no balance) before the end of the current EPOCH.

Staking allows users to earn rewards from the cryptocurrencies they own. This system also gives the opportunity to become an active member of the Takamaka blockchain.

However, in order to take part in the staking process, users must prove they own at least 200 TKGs to stake on a node at the 8,000th block, corresponding to 1/3 of an EPOCH (evaluation point).

To get started with staking, you have to commit your TKGs on one of the Takamaka Network nodes. Whether you are using the mobile or desktop version, you can select your preferred nodes by clicking on My Wallet. On the next screen, you’ll find a staking icon (top right), from which you can see all the nodes available on the blockchain. 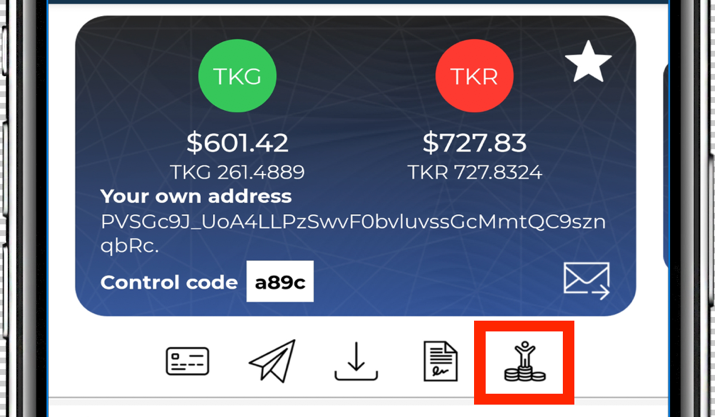 (Highlighted in red: the staking icon)

After clicking on the staking icon, press the “+” button on the top right to view the list of available network nodes.

Can I put at stake something I do not have?

In this case, you can opt for virtual staking. Let’s take a look at how this process works.

Let’s say you own 10,000 TKGs but would like to stake 100,000 TKGs, which you don’t have. You can still participate in staking since Takamaka allows you to “virtually” use tokens you don’t own. 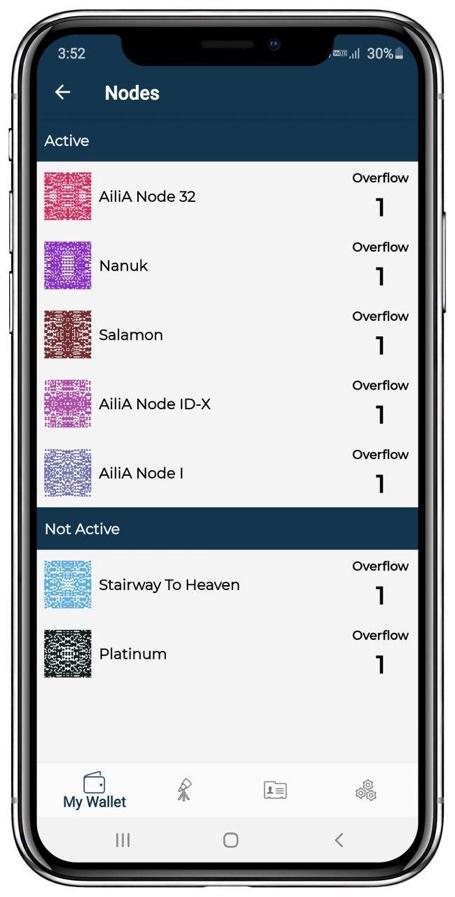 The algorithm knows the balance of each address and therefore knows if a user owns enough funds.

But thanks to the Virtual Staking System, instead of preventing the user from completing the operation, the algorithm allows you to earn rewards over time that will be automatically reinvested in the staking process.

The algorithm knows you don’t actually own that amount, therefore it will capitalize the rewards received until it reaches 100,000 TKGs.