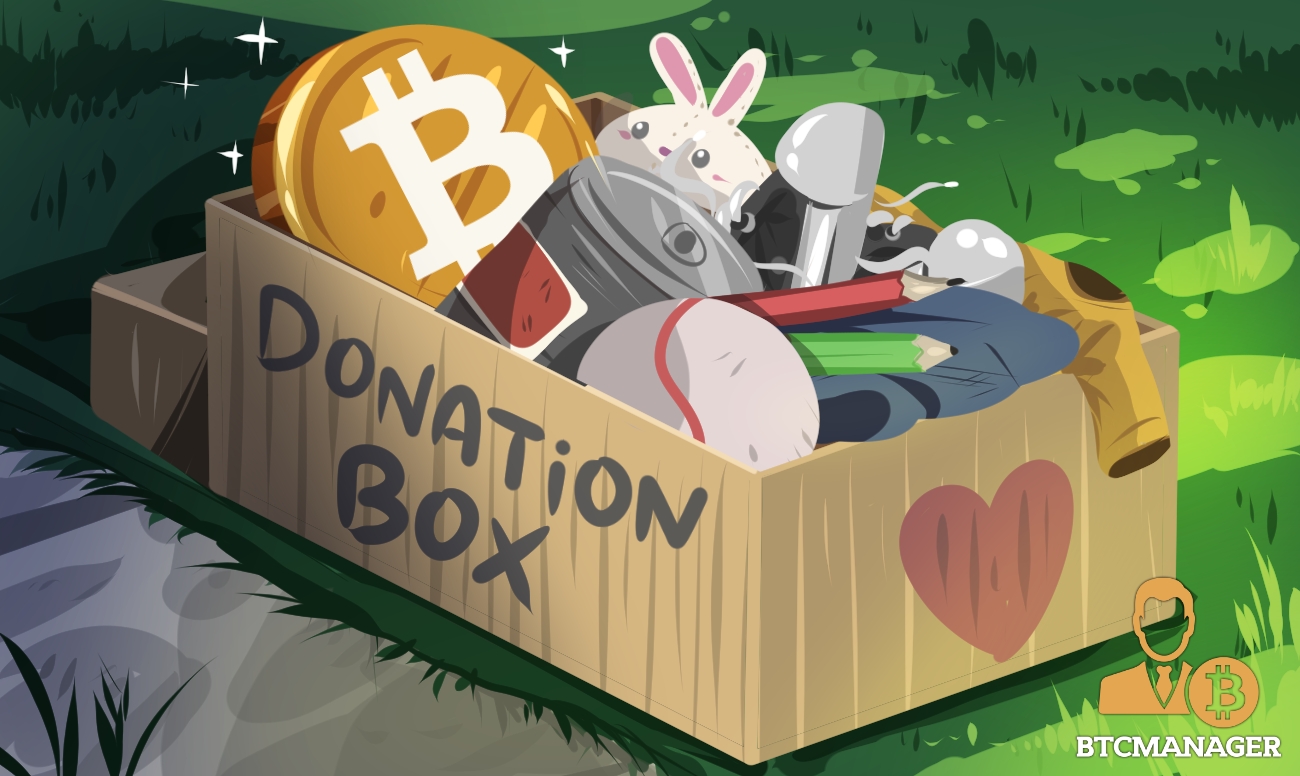 Donations in cryptocurrency have been increasing in frequency. Due to their transparency and accountability, non-profit organizations have started to accept contributions in digital currencies, and this is has helped them to raise more funds from a new subset of donors.

As trust in charities continues to fall and donations decrease in size, charities are looking to better their public image by offering greater levels of accountability. Supporting endowments in bitcoin means donors can have a greater degree of scrutiny and oversight, leading to genuine, positive changes in the relevant field of activity.

If you are looking to donate, here are ten non-profit organizations to which you should consider donating bitcoin.

BitGive is a California-based non-profit organization that provides a platform for bitcoin donations. BitGive operates differently from other charities as it does not focus on one specific cause. Instead, the organization solicits donations in BTC, which it then re-distributes to other charities.

The non-profit was founded in 2013 by entrepreneur Connie Gallippi. In its five years of existence, BitGive has worked in conjunction with many well-known non-profits. These include Save the Children, The Water Project, TECHO, and Medic Mobile among others.

Additionally, the organization has developed a blockchain-based platform through which it is possible to track every donation made to a charity. The platform is called GiveTrack and allows donors to see the impact of their contributions in real-time.

If you are looking to support a more politically inclined cause, then Free Ross may be an interesting non-profit for your donations. Free Ross is dedicated to attempting the release of Silk Road founder, Ross Ulbricht, from prison.

Ulbricht is serving a double life sentence plus forty years with no chance of parole for crimes in connection to creating and operating the darknet marketplace Silk Road. Ulbricht created the website in 2011, placing great importance on privacy on the platform, allegedly running the marketplace under the synonym of Dread Robert Pirate.

Ulbricht is a proponent of libertarian and free-market economics and was attempting to create a platform through which people could trade any good and service, freely. The platform quickly gained popularity, with all manner of goods, both legal and otherwise, available on the website. Payments on the marketplace were made exclusively in bitcoin (BTC).

Authorities arrested Ulbricht in 2013 and subsequently charged in 2014. He was eventually convicted of all charges in 2015 and sentenced to jail even though there was evidence of irregularities in the process of the investigation and prosecution.

The Free Ross website is dedicated to overturning his conviction. It is run by his family and accepts donations in bitcoin.

Given that Silk Road and, thereby, Ross Ulbricht have helped bring bitcoin to the mainstream (for better or for worse), everyone who made money investing in bitcoin in early days should consider donating to the campaign as a thank you for playing his part in embracing bitcoin long before Lamborghinis and institutional investors.

“Raises funds for the legal and public defense of those who risk life or liberty to make significant contributions to the historical record.”

Snowden is a former intelligence operative who was catapulted to global fame when he leaked a large number of classified documents. The leaked documents revealed a significant amount of illegal activity perpetrated by the NSA, including widespread spying and surveillance of civilians in the U.S. and abroad.

Through his positions at the CIA and the NSA, Snowden was exposed to many programs which involved infringing on the privacy rights of individuals as well as the sovereignty of other nations. His exposure to these programs showed the world for the first time how much intelligence agencies are collecting data about private individuals without their consent.

The revelations provided by Snowden’s archive are myriad, and his actions are controversial with opinions divided between branding him a traitor and calling him a hero and patriot. In 2013, Snowden was charged with treason and of violating the Espionage Act of 1917 which carries a sentence of at least thirty years.

The funds collected for the Edward Snowden Defense Fund are used to support the legal team working to return Snowden’s life to some semblance of normalcy. Snowden is currently residing in Russia, having sought asylum following his eventual exile from the United States.

In the same vein, you can choose to donate bitcoin, or a few select digital currencies, to WikiLeaks. The non-profit organization is dedicated to making public the content of secret and classified documents, provided to them by anonymous sources.

The website was founded in 2006 by Australian national Julian Assange. WikiLeaks has been credited for publishing some impactful data dumps and uncovering misdeeds in many jurisdictions in the past. The leaks have, in some instances, set in motion the scales of justice, prompting investigations geared towards prosecution of those guilty.

Everything at WikiLeaks from the staff, servers, and other infrastructure is all funded entirely through public donations.

The Tor Project is a non-profit organization that keeps the anonymity project with the same name in good functioning order. The Tor project was founded in 2006 by computer scientists and researchers who were working on creating the anonymity-focused platform.

TOR is an acronym for “the onion router.” The name is a reference to the manner in which the software is structured. Through many network overlays, the network can provide access to the Internet while significantly reducing the chances of compromised privacy. The architectural structure of the network resembles an onion due to its many layers, hence its name.

The Tor network is designed to protect its users’ privacy, allowing them to communicate and interact with the Internet on their own terms. The service is free and available for download to anyone.

If you are of the opinion that preserving privacy and promoting the maintenance of civil liberties while online is important, then you are likely to be interested in providing financial support to the Tor project. The project is funded through donations and grants from governments as well as fellow NGOs. Private individuals can also donate bitcoin to the project.

Another organization dedicated to protecting civil liberties online is the Electronic Frontier Foundation (EFF), which has been active since its 1990 creation. The foundation was started by a group of lawyers and computer scientists partly in response to various ill-informed raids by authorities on a number of computer scientists who were wrongly suspected of illicit activity.

The EFF began as a resource to provide legal support for those who were wrongfully targeted by law enforcement but has since built its reputation as an organization that helps people preserve their computer and Internet-related civil liberties.

The EFF goes about its mission in varied ways. The charity holds awards where it celebrates prominent individuals whose actions are in line with its mission of promoting privacy. Additionally, the EFF has a reward program for private individuals who contribute to science.

It also provides educational material for free for the public to learn about ways to preserve their privacy online. Other programs run by the EFF include its patent-busting program where it challenges patents that may facilitate the infringement of privacy rights.

The EFF is entirely donor-funded, and interested parties can contribute in both ether and litecoin. Bitcoin and bitcoin cash endowments are also possible for those who join the organization as members.

The Internet Archive is an organization that works to ensure the preservation of the public world wide web. The organization believes in the importance of a free and open Internet and believes providing a secure archive is an essential part of that.

The organization was founded in 1996 and provides access to its archive through its platform called the Wayback Machine. Through the tool, it is possible to peruse through over 341 billion saved web pages. The Internet Archive also provides other downloadable archived resources such as books and software.

A staff of only 150 people supports the Internet Archive. It needs funds to pay its relatively small workforce as well as to provide support for its servers which are distributed across the world. The organization is funded entirely by charitable contributions. It is possible to make donations in cryptocurrency to the charity as its supports payments in bitcoin, bitcoin cash, ether, and Zcash.

The Free Software Foundation was founded in 1985. The long-standing organization works to support the creation and provision of cost-free software. The charity believes providing free software is an integral part of preserving the rights of computer users.

Software with a hefty price tag attached locks out those unable to afford the payments while incentivizing providers of these proprietary codes to take advantage of their monopoly.

The FSF provides and certifies free software. If you believe software resources should be made readily available and free for use, then you should consider donating to the FSF. You can make your digital currency donation in either bitcoin or litecoin.

Founded in 2010, Humanity Road is an organization dedicated to providing support in the event of natural disasters. The NGO utilizes technology to create small groups of self-led volunteers who respond to disasters in their vicinities.

When not actively participating in relief efforts, Humanity Road helps promote disaster preparedness by holding workshops and providing educational material to the public on a cost-free basis.

The charity depends on donations and supports tax-deductible contributions in BTC, LTC, ETH, and BCH.

Watsi is a nonprofit organization with a focus on healthcare. The charity allows people to make contributions towards the medical care of individuals in developing countries who are unable to afford proper healthcare.

All of the donations made through the Watsi platform are guaranteed to reach the recipient, without any cuts. Watsi does not take any organizational fees and will even pay for any bank transfers fees associated with a contribution. The charity focuses on cases that are relatively low-cost but high-impact for its recipients.

Donors can contribute to a specific case or the greater Watsi Fund. The charity is funded entirely by donations from well-wishers. Contributions can be made in fiat as well as in bitcoin.