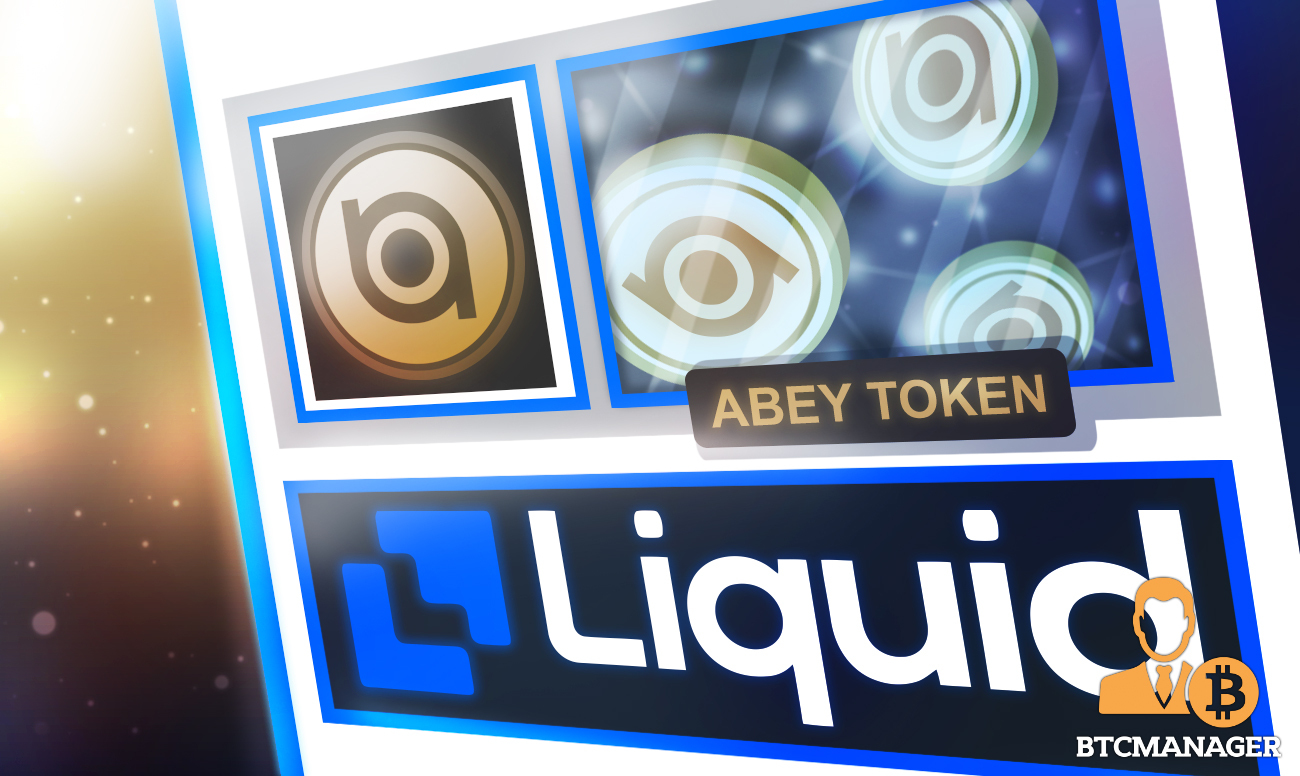 ABEY, the central currency of the cross-chain, smart contract-enabled, scalable, and high throughput ABEYCHAIN, is now available for trading at Liquid Global.

The Singapore-based exchange, which is registered and compliant with Japan’s Financial Supervisory Authority (FSA), is one of the largest ramps in the world, supporting over 180 unique pairs.

According to coin trackers, the exchange registers over $165 million in cumulative daily trading volumes. It also serves over 800k users in more than 100 countries. Additionally, Liquid Global offers margin trading of up to 100X on select crypto-fiat pairs.

Today’s listing at Liquid Global, therefore, is an indicator of growth and comes at the backdrop of impressive development growth and rapid price expansion of ABEY token. This is a giant leap for the ABEY Foundation, which plans to ultimately make ABEY a global currency.

Following the token’s listing at ZBX.one exchange in 2021, the token’s price surged 400 percent, rallying from around $0.61 to $2.5 at the time of writing. Based on the same, it is easy to predict that ABEY will continue to maintain the same price trajectory primarily from the massive demand from Liquid Global’s broad user base.

ABEY Uptrend Likely to be Sustained

Fundamental factors are also likely to further propel the token’s valuation in the days ahead. As the high throughput public ledger develops, the number of users continues to increase. By mid-August 2021, over 100k users were leveraging the platform’s low-fee and interoperability features.

ABEYCHAIN is one of the few third-generation public chains that has expertly balanced decentralization, security, and efficiency without infringing on any principle that genuinely defines and differentiates a blockchain from ordinary centralized databases.

Specifically, ABEYCHAIN users benefit from the high throughput and scalability to launch heavy or intensive “dApps” meeting their varied needs. The public ledger’s interoperability and high processing speed—of which ABEYCHAIN developers say can be expanded to over 10k TPS– features, most notably, allows the transfer and processing of other currencies, like ETH or BTC, directly from its rails without operators experiencing significant delays.

From a solid, flexible, and interoperable base, end-users don’t have to pay high fees when interacting with the public ledger. Adoption is further accelerated by the developer-friendly environment.

The platform is the primary base layer from where the network’s security is anchored, allowing users to deploy dApps—including DeFi and more.

ABEYCHAIN has a DeFi Hub called XSwap, a DEX, enabling traders to swap tokens for free. Besides, there are other exciting options such as yield farming, staking, vaults, and more which network users can take advantage of.

Moreover, as a means of shielding against price volatility, ABEYCHAIN has released its stablecoin, aCash Token (ACT) that’s pegged to USDT—one of the world’s most adopted stablecoin. Whenever ACT is purchased, an equivalent amount is mined and destroyed once the transaction is reversed. The on-chain aPay is an avenue of swapping ACT with USDT within the ABEYCHAIN wallet.

There is the ABEY Storage Network (ASN) within the public ledger. This decentralized storage uses the incentivizing layer of the IPFS that anchors Filecoin to function. Proof-of-Work miners, in this arrangement, are rewarded with Abey Storage Tokens (AST). Through the XSwap, AST can be swapped for FIL.

ABEYCHAIN is a modern public ledger that delicately balances decentralization, efficiency, and security while adding interoperability, distinguishing itself from competitors.

The addition of DeFi and a decentralized storage of which mining is allowed makes it a drawer for users, injecting activity to its growing ecosystem. Listing at Liquid Global could see more adoption, pushing ABEY token demand even higher.