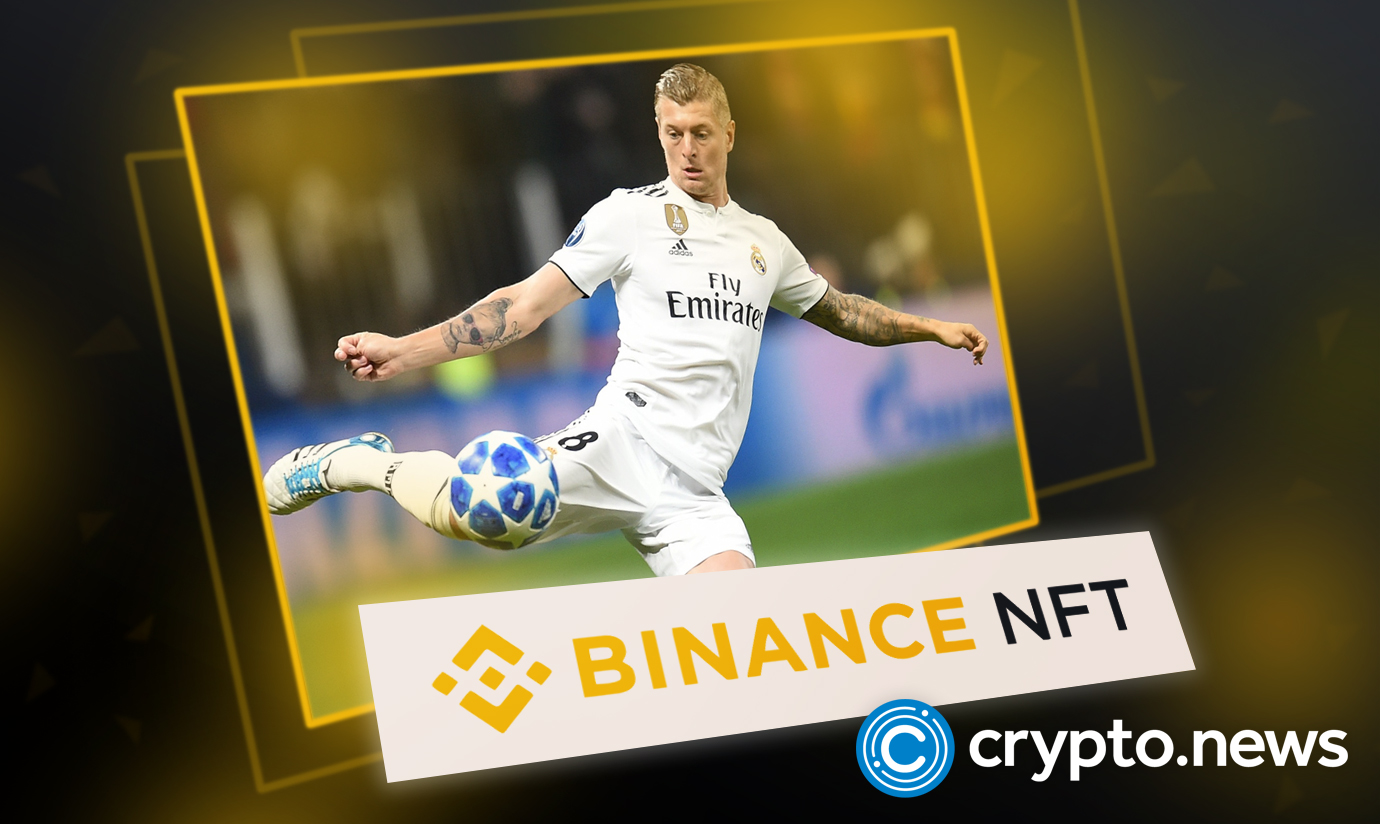 Binance NFT has announced the launch of a new unique digital collectibles mystery box collection in collaboration with Toni Kroos and NFKings. The collection will be released as 6,500 mystery boxes on March 31, 2022, at 11 AM UTC, each containing NFTs depicting various achievements and glorious moments of Kroos’ highly successful soccer career.

According to a press release shared with crypto.news, the collection will be released as 6,500 pieces of mystery boxes on March 31, 2022, at exactly 11 AM UTC and each box will contain NFT artworks representing various achievements and exciting moments of Kroos’ sterling soccer career.

For those who are unaware, Toni Kroos is a 32-year-old living soccer legend who has contributed immensely to the success of the German National Football team and his current club, Real Madrid of Spain.

Kroos, a world-class midfielder, made history during the 2014 FIFA World Cup, when his excellent Man of the Match display enabled the German senior national football team to beat Brazil by a whopping 7-1 in the semi-final, making that game one of the most spectacularly dominating soccer matches in the Mundial to date.

Kroos’ contribution to his present football club, Real Madrid, enabled the team to dominate the UEFA Champions League from 2015 to 2018, winning the competition three times in a row (2016, 2017 and 2018), while also winning several La Liga titles over the years.

The NFTs contained in each mystery box will have four classes of rarity: SSR (Super Super Rare), SR (Super Rare), R (Rare), and N (Normal). Collectors have an equal chance of finding NFTs belonging to any of the four categories inside a mystery box, however, their chances of getting the R or RR collectibles is lower.

The team has hinted that the NFT holders will stand a chance to receive unique perks and rewards, including autographed jerseys and memorabilia from Kroos, as well as an opportunity to have a video call with the superstar.

Notably, a significant portion of the proceeds to be generated from the Toni Kroos NFT sales will be donated to the Toni Kroos Foundation, a charity organization whose primary objective is to help sickly children and their families, and to the United Nations Refugee Agency, a global organization dedicated to saving lives and protecting the rights of refugees from war, political repression and natural disasters.

Commenting on the project, Kroos said:

“I am extremely thankful to Binance, NFKings, and some amazing artists, including Ahmed Abokor & Josha, for bringing these NFTs to life. It’s an entirely new way of interacting with your fans, almost like playing cards in the digital age. For me, it’s all about making my fans happy while supporting children suffering from debilitating sickness who are helped by the Foundation.”

The team says the release of the NFTs aims to create new ways for Kroos to interact with his fans around the world, while also contributing to the charitable cause he cares deeply about.

Binance NFT offers an open market for artists, creators, crypto enthusiasts, NFT collectors, and creatives around the globe, with the best liquidity and low fees.

Binance-based NFTs are environmentally friendly, as they are minted via the proof-of-stake algorithm, and are available to a large swath of regular crypto enthusiasts, making it the platform of choice for NFT creators and collectors.