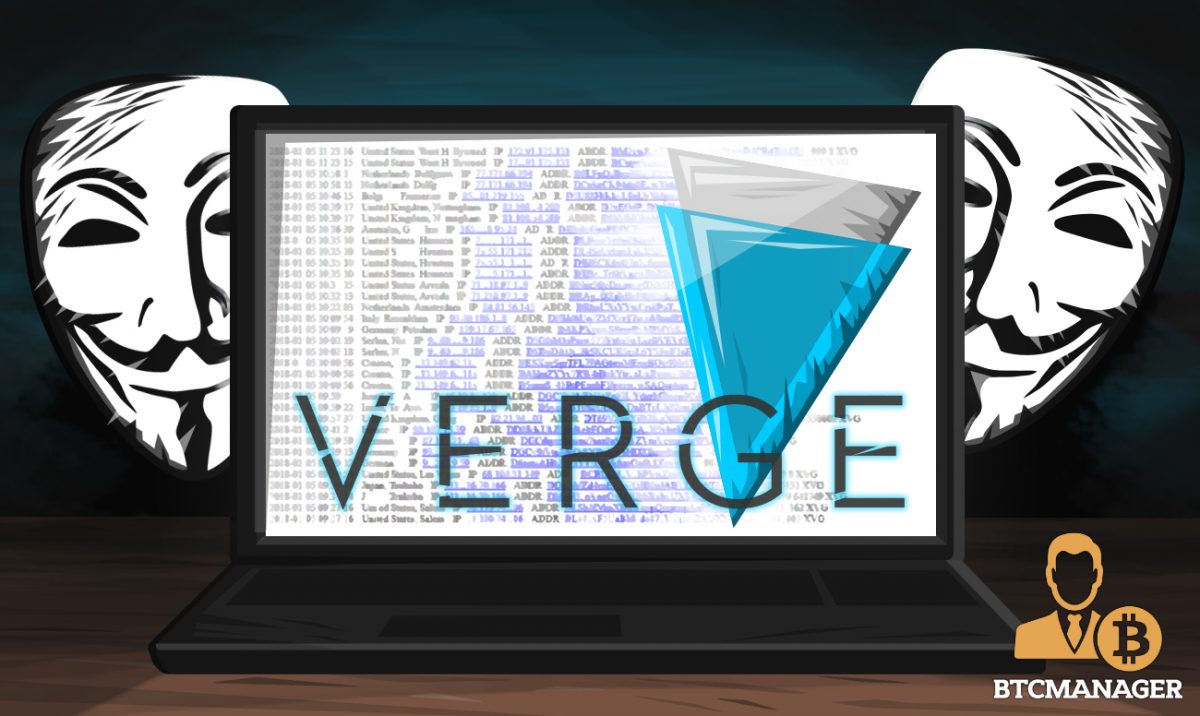 Recently, an anonymous site exposed lists of IP addresses that were made via the Verge core and Electrum wallets. In the past, the cryptocurrency has been criticized due to some people, also known as whales, holding the majority of the coins and encouraging people to buy a coin with no genuine, unique proposition.

Bitcoin has its limitation to ensure the privacy of transactions whereas the Verge coin (XVG) pledges anonymity to its users. The digital asset achieves this by utilizing both Tor and I2P – anonymity-focused networks.

XVG developers indicate that “Verge uses multiple anonymity networks such as Tor and I2P. The IP addresses of the users are obfuscated and the transactions are completely untraceable.”

The IP addresses provided by the anonymous source are difficult to verify. However, it is best to be careful when making use of the supposed ‘privacy coin.’ XVG claims to be one of the most privacy-centric coins in the crypto space, but these assertions have grown murky in lieu of recent events.

Some have even claimed that Verge began its journey as a hard fork of Dogecoin, Dogecoin Dark.

The anonymous whistleblowing site clarified: “Obviously not all of the IPs below will be correct. Some might just be relaying a transaction. The point is that a large amount will be correct due to the XVGnetwork being so small. If your IP appears in the list with a TX you didn’t do, it means you relayed it for someone else. Would you want your IP to be connected to other users’ transactions?”

also, so far we have not found any accurate ip/transaction pairs on this website, but we're continuing to entertain it.

However, responding to the allegations Verge tweeted “also, so far we have not found any accurate ip/transaction pairs on this website, but we’re continuing to entertain it.”

BTCManager found that the transactions we sent were in fact linked to the IP address used at the time. Using a 4G data connection, the image below shows that the transaction made on the Electrum wallet was linked to the IP address. While not completely precise, Justin Ehrenhofer suggested that for the Electrum page they are “about 90 percent accurate.” Nevertheless, it does blow open the claim that Verge obfuscates IP addresses.

Even if Tor is utilized, it does not make the cryptocurrency unique or private, as the same can be done with bitcoin, litecoin, monero and pretty much every altcoin that is based on Bitcoin’s code. While Tor would mask IP addresses, the Verge blockchain is still public for everyone to see. The image below demonstrates the confusing marketing the Verge crowd have put out; while honest about their public blockchain, they have misled users when claiming IP addresses are obfuscated. To provide users with greater choice and ensure there is no single point of failure, Monero plans to mask IP addresses with Kovri, which is currently under development.

The virtual currency came to limelight with John McAfee’s tweet that spiked it to unexpected heights. Since then the token has been under continuous controversy with a massive dip arriving after Twitter user MarQuis Trill (@6billionpeople) told nearly five million followers to drop the coin.

John McAfee, the pioneer of antivirus software, pumped Verge in December 2017, resulting in a price surge of 2,600 percent. The price hike came after one of the whales that go by the name XVGWhale spent a weekend with the crypto influencer.

The XVG price hike stimulated doubt as those familiar with the space have regularly seen similar pump and dump schemes. Additionally, many have criticised McAfee to have charged millions to recommend XVG.

According to XVGWhale, the software tycoon earned millions from Verge to promote the coin. McAfee later denied all allegations by claiming that his phone was hacked and the supportive XVG tweets weren’t true.

The cryptocurrency has had a strange start this year and ultimately being left out of many investors 2018 portfolio. The current price of XVG stands at $0.16, down from $0.23 on Christmas Day. With misinformation permeating the crypto-space, the revelation that IP addresses are not obfuscated should be the final nail in the coffin for the “privacy” coin Verge.