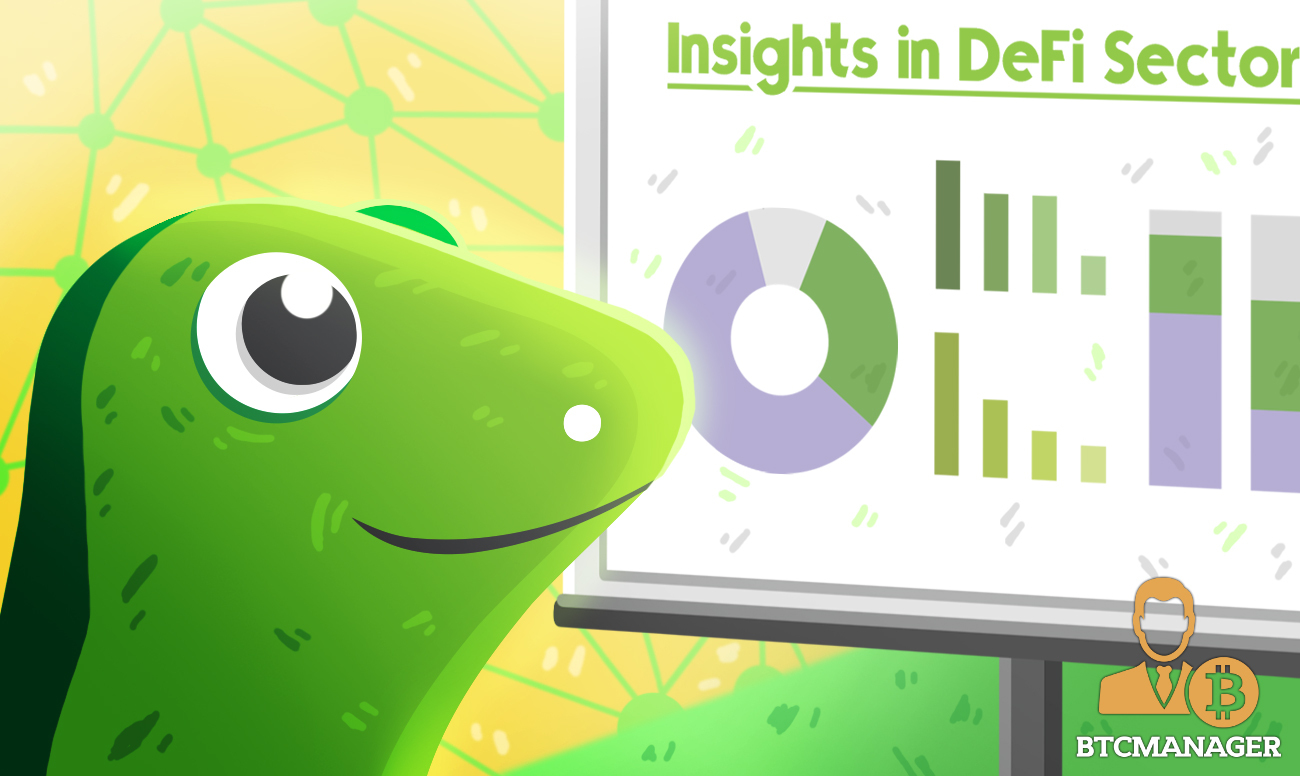 While the larger blockchain ecosystem continues to expand across several industries around the world, the exponential growth of the decentralized finance (DeFi) sector in recent times seems to have caught all the eyeballs. The rapid pace of growth of this exciting space can be ascertained from the fact that the total value locked in DeFi smart contracts touched $1 billion in February 2020 and continues to snowball further.

In an attempt to learn more about this young but ambitious sector, CoinGecko conducted a survey of 694 people in March 2020. To no one’s surprise, the survey was successful in unearthing several key insights that can help our readers develop a better understanding of the DeFi space.

The Four Key Findings of the Survey

Coingecko’s survey came up with four key findings that can help shed more light on the infrastructure, behavioral trends, and the finer nuances of the DeFi space. Following is the summary of CoinGecko’s four key findings.

According to the survey, currently, the majority of the DeFi users are male with more than 50% of them in the 20-40 years old age bracket.

Per data collected through the survey, more than 90% of respondents who have heard of Dai own the stablecoin. Thanks to its immense popularity within the DeFi space, Dai is the second most owned stablecoin in the larger cryptocurrency industry.

DeFi Protocols High on Brand Awareness but Low on Usage

Despite their high popularity within the space, the usage of DeFi protocols remains sluggish. Possible reasons could be that users are either not aware of these protocols or lack the knowledge to use them.

Unsurprisingly, the survey found that respondents who are familiar with DeFi are more comfortable going completely bankless. These respondents cited a lack of trust in the banking system as the main reason.

In their survey, CoinGecko found that a healthy 619 out of 694 respondents had heard of DeFi.

Notably, out of these 619 respondents, the survey found that only about 9% of them were women, a fact testimony to the significant gender gap in the DeFi community. This fact, however, should hardly come as a surprise as the DeFi space is essentially a subset of the broader fintech industry where gender gap issues have been prevalent for many years. The report by CoinGecko opines that by making the space more appealing to the women, the adoption of DeFi could be propelled significantly. 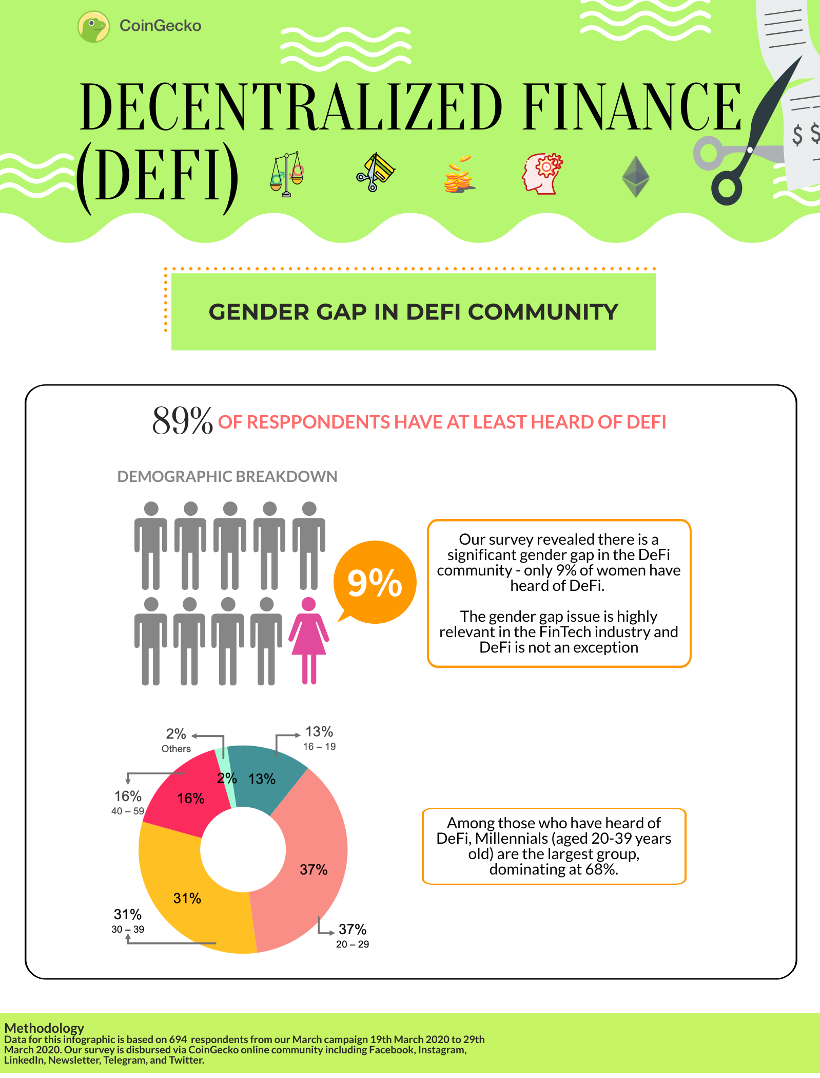 By further breaking down the data by age, the survey found that close to 68% of the 619 respondents comprised of millennials who were aged between 20-39 years.

Similarly, respondents below the age of 16 years or Gen-Z made less than 1% of the DeFi survey’s respondents. In the coming years, the Gen-Z demographic is expected to play an instrumental role in the development of the DeFi space courtesy of them being highly tech-savvy and their tendency to embrace new and robust technological solutions.

The survey found that users who have heard of DeFi are more likely to own stablecoins. This finding doesn’t sound too far-fetched as the vast majority of DeFi protocols and applications run on stablecoins. For the uninitiated, stablecoins are essentially digital currencies that are usually pegged to fiat currencies to ensure they don’t exhibit volatile price movements. 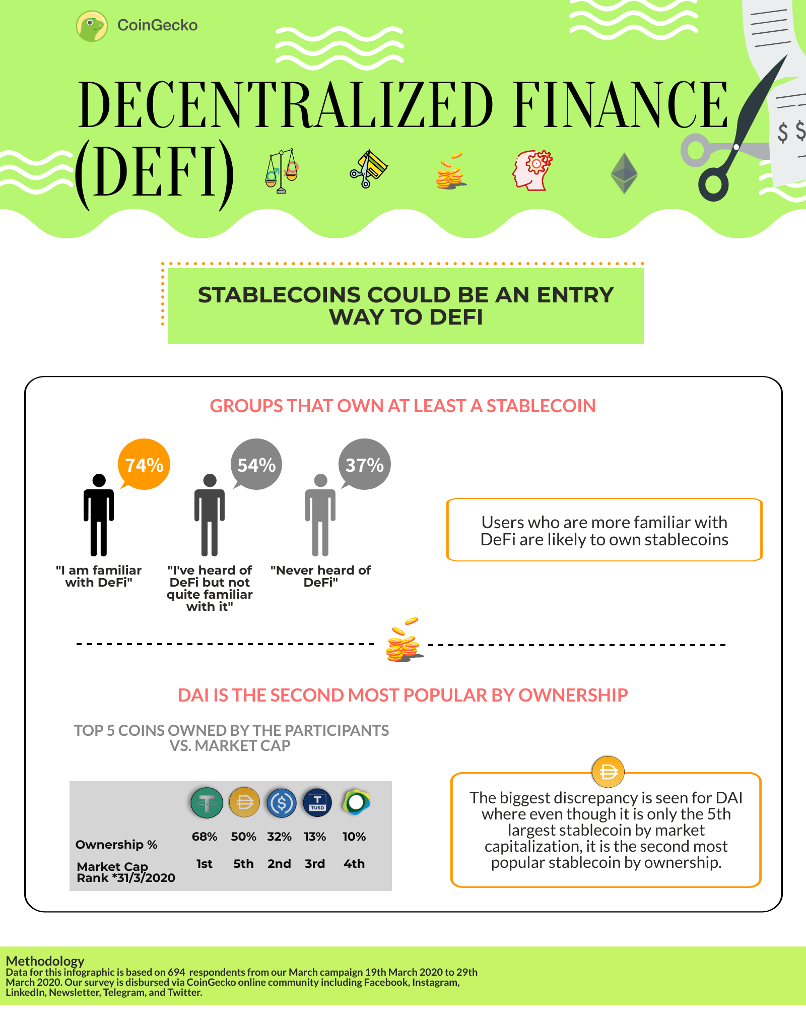 Another key finding in the survey hinted that the top five stablecoins owned by survey respondents are similar to the top five stablecoins by market capitalization. That said, it’s also worth highlighting that the ranks between these measures differ with the noted exception of Tether which holds the distinction of not only being the largest stablecoin by market capitalization but also being the most owned among CoinGecko’s survey respondents.

Starkly enough, the biggest variance was observed in Dai. Although it is the fifth-largest stablecoin by market capitalization, Dai was the second-most popular stablecoin by ownership among the survey respondents. The high goodwill enjoyed by Dai among DeFi enthusiasts could be attributed to the fact that Dai is native to a vast majority of DeFi protocols vis-a-vis other stablecoins. Additionally, a significant six percent of total value locked in DeFi protocols is stored in the form of Dai.

Noticeably, these trends hint at the prominent role played by stablecoins in shaping the DeFi economy.

CoinGecko’s “How to DeFi” book provides certain key insights into the burgeoning DeFi sector. In the book, CoinGecko identified nine major categories in the DeFi ecosystem.

The rise of decentralized exchanges (DEX) has only cemented the argument that an increasing number of individuals are willing to turn to decentralized solutions and platforms provided there are enough options to choose from. 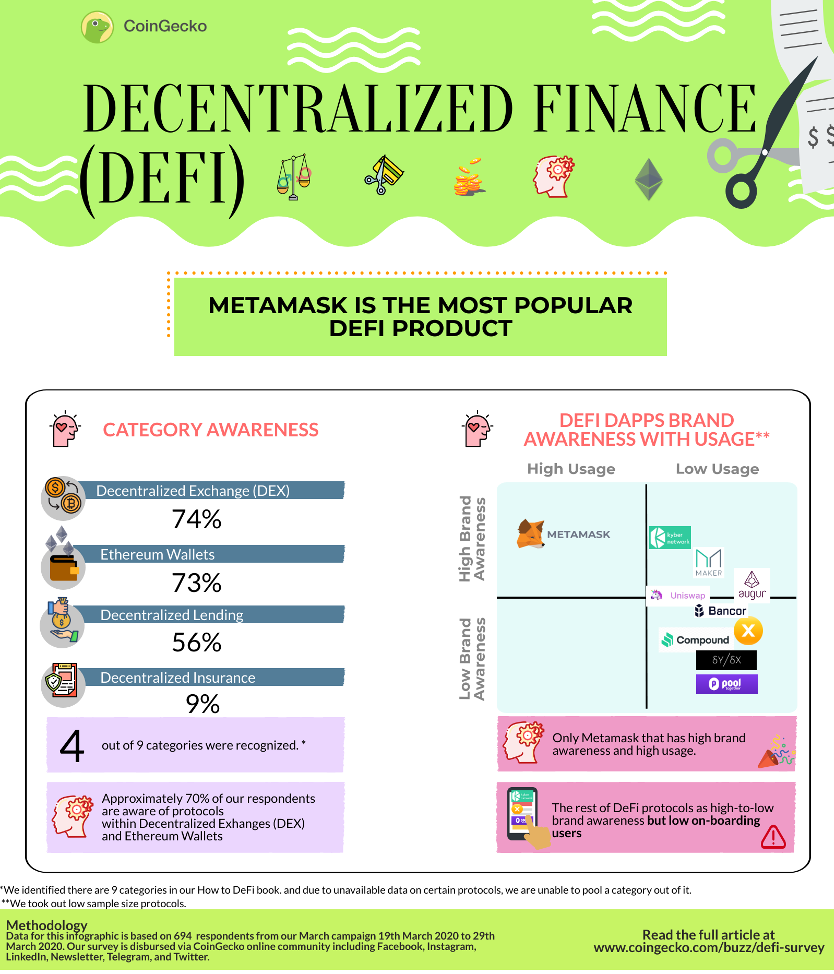 According to the survey, under the DEX category, Kyber Network emerged as the most popular brand with 78% of the respondents saying they recognized the name. Kyber Network is trailed by Uniswap and Bancor with 60% and 59% brand recognition among the respondents, respectively.

Speaking of the Ethereum Wallets category, Metamask ranked first with 72% of respondents stating that they recognized the brand.

Is Brand Awareness a Reliable Indicator of Actual Usage?

Per data collected from the survey, it can be said that Metamask is the only protocol that scores well in both – brand awareness and actual usage. Specifically, 53% of the respondents have used to the protocol in the past three months. This firmly legitimizes the claim that Metamask is the go-to digital wallet for people who like to venture out in the DeFi ecosystem.

Conversely, all other protocols showed poor results in terms of usage with less than 50% of users have used them in the past three months.

Several reasons could be attributed to the low translation of high brand awareness into actual usage. For instance, these protocols don’t provide any actual immediate need or a strong reason per se to encourage users to use them. The low actual usage could also a result of the lack of understanding of the usage of product offerings among users.

On a similar note, for protocols that have both – low brand awareness and low actual usage, it could be said that their target users are not actively looking for these products. A lack of media mentions could be another hurdle that has hindered these protocols from developing sufficient brand goodwill. Take, for example, protocols such as PoolTogether and dYdX. Both of these protocols are barely an year old, and, as evident from the survey result, enjoy less brand recognition compared to other more popular protocols.

The final major insight gathered from the survey data is with regard to the respondent’s stance toward traditional banking systems. CoinGecko found that users are closely split in willing to go completely bankless and being somewhat impartial to doing so. Despite this uncertain position, it was found that users who are well aware of the nitty-gritty of the DeFi sector were more willing to permanently do away with the traditional banking system. 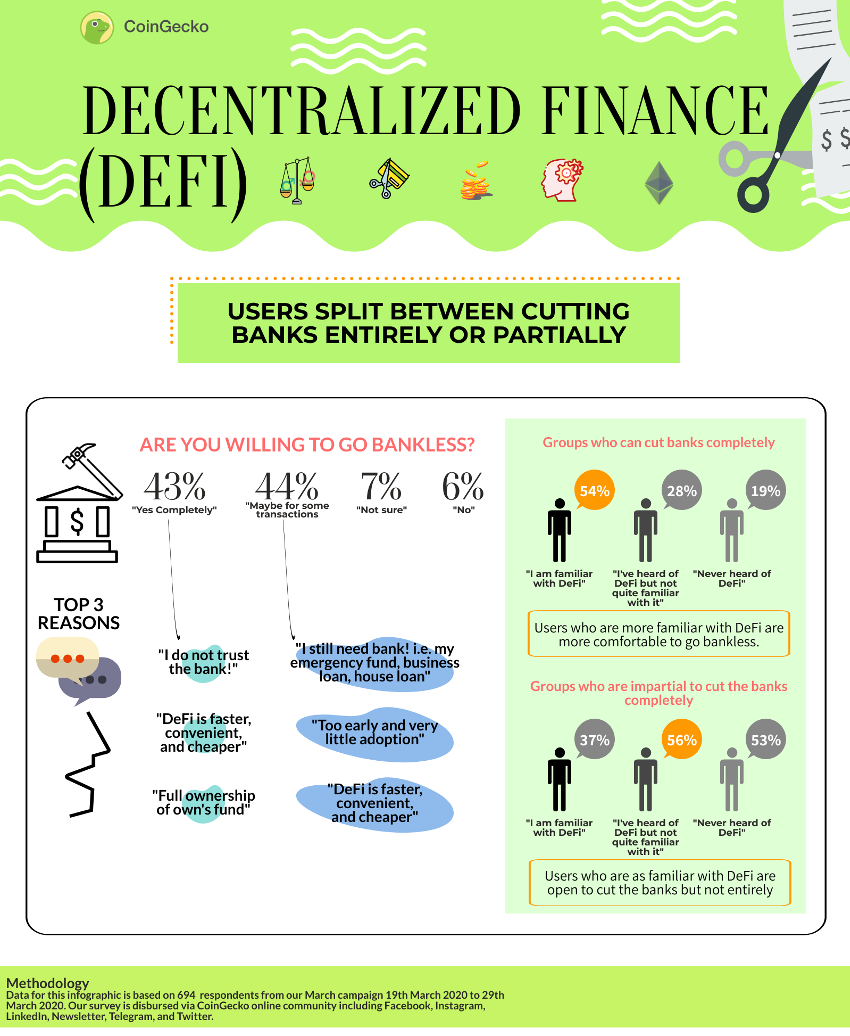 As for the reasons for harboring such a sentiment, 31% of those who are willing to go completely bankless stated their distrust of the banking system as the key reason. Further, 21% of them opined that they were willing to go bankless due to the several advantages of DeFi over traditional banking.

The data collected by CoinGecko stay in-line with the data compiled by the Edelman’s Trust Barometer Survey that highlighted financial services as the least trusted sector in 2019.

Both the groups mentioned above stated that they prefer DeFi over banking due to its higher efficiency and convenience. The bottlenecks and inefficiency of traditional banking could further be explained by the fact that according to the World Bank, sending remittances via banks have an average fee of up to 10% of the amount sent and takes as much as 48 hours to receive.

As for those who are impartial on going completely bankless but still believe in DeFi’s potential, there are three major hurdles – they are still dependent on banks, DeFi is still in its early stage and has a relatively low adoption, and DeFi is still not as secure as banks.

Concluding, the DeFi space holds tremendous potential to change the paradigm of finance as we know it today. The rise in the popularity of decentralized finance applications and protocols is not only driven by their higher efficiency and convenience but also by a general rise in the interest of the people who are keen to embrace an alternative to traditional banking institutions. 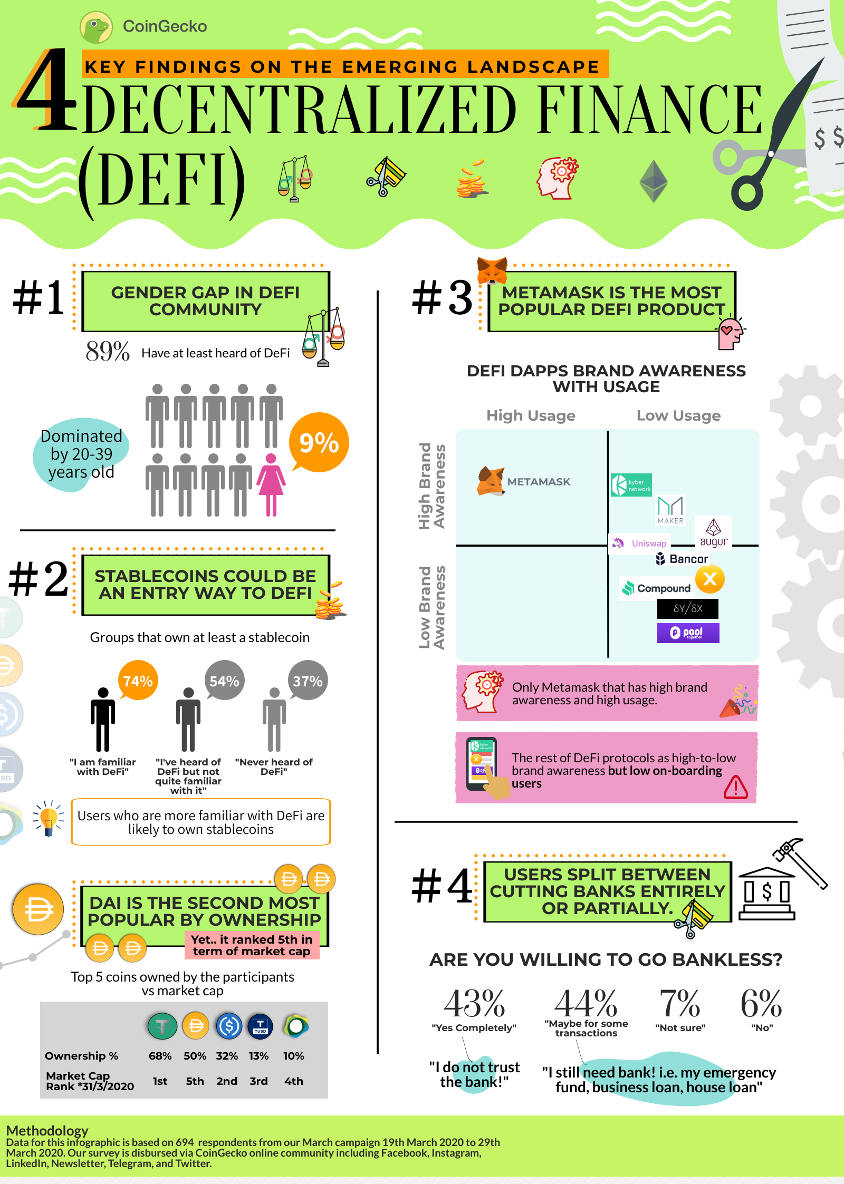 There’s a need for more inclusivity in the DeFi space. More representation of people of all ages and genders could act as the catalyst that accelerates DeFi’s mainstream adoption. The survey highlighted the critical role played by stablecoins in the DeFi ecosystem.

Further, the incongruent relationship between brand awareness and actual usage observed across DeFi protocols also requires attention from the industry thought leaders. DeFi founders can grab this opportunity to educate the public on their protocols that mirror the democratic ethos of blockchain technology.

Last but not the least, if DeFi ever hopes of taking market share from traditional banks and financial institutions, it must position itself as a reliable and trustworthy alternative. The DeFi ecosystem should focus on bolstering its security mechanism to successfully evade cyber-attacks and increase the overall trust in its protocols.