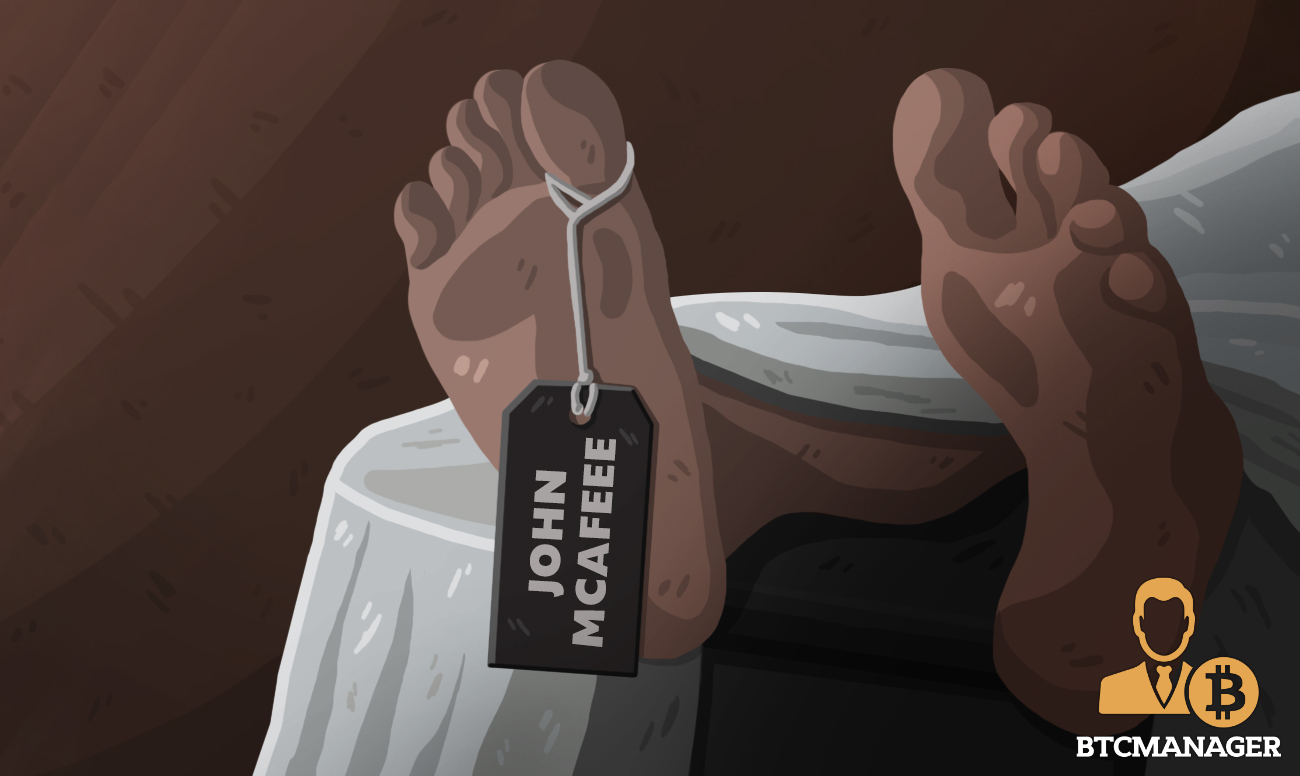 British-American computer programmer, founder of one of the earliest software anti-virus companies McAfee Associates, and cryptocurrency evangelist was reportedly committed suicide in a prison in Spain.

According to CNBC on Wednesday (June 23, 2021), McAfee was found dead in a Barcelona prison in Spain, where he was held on charges of tax evasion. Efforts by medical personnel to resuscitate the eccentric anti-virus software founder proved abortive, with reports that McAfee committed suicide by hanging.

Prior to the unfortunate incident, the McAfee Association founder was due to be extradited to the U.S. to face his tax evasion charges. The Spanish High Court had approved McAfee’s extradition to the U.S. earlier on Wednesday.

Back in October 2020, the U.S. Securities and Exchange Commission (SEC) accused the 75-year old computer programmer of unlawfully promoting several initial coin offerings (ICO), earning over $23 million in compensation. According to the SEC, the tech entrepreneur’s action was in contravention of the U.S. federal securities laws.

The Department of Justice (DOJ) also indicted McAfee for tax evasion. A statement to from the indictment read:

“McAfee allegedly evaded his tax liability by directing his income to be paid into bank accounts and cryptocurrency exchange accounts in the names of nominees.”

The cryptocurrency evangelist was arrested in Spain and awaiting extradition to the U.S.

“Confirmation has come from our legal team in Spain that John was found dead in his jail cell. I am saddened to hear of the events and my prayers go out to his wife Janice. John was and will always be remembered as a fighter. He tried to love this country but the U.S. Government made his existence impossible. They tried to erase him but they failed.”

The news of McAfee’s death shook the cryptocurrency community, with Crypto Twitter offering their condolences. Binance CEO Changpeng Zhao said that the eccentric personality will be missed. YouTuber Tone Vays and The Crypto Dog also commented on McAfee’s demise, with The Crypti Dog calling the late tech entrepreneur a legend, crypto promoter, and advocate of digital privacy.

Other popular bitcoin and crypto advocates who spoke about the death of the anti-virus software maker included Max Keiser and Jameson Lopp.

Suddenly, popping out of the jungles of Belize. A swashbuckling adventurer. A Joseph Conrad character. A man from our past who lived large and raised hell. A living legend. He will haunt our dreams, I suspect. And his legend will grow bigger.

One of McAfee’s last tweets before his death was on June 16, where he stated that contrary to what the U.S. authorities believed, he had no crypto, adding that he lost all his assets and his friends.

The US believes I have hidden crypto. I wish I did but it has dissolved through the many hands of Team McAfee (your belief is not required), and my remaining assets are all seized. My friends evaporated through fear of association.

Yet, I regret nothing.

While the community mourns the legend, there are some who believe that McAfee did not commit suicide.  At the moment, investigations are ongoing, and the official cause of death would be certified soon.

While alive, McAfee caused a lot of stir in the crypto industry and made various bitcoin price predictions in the past. In 2017, the tech entrepreneur said that he would “eat his dick on national television” is bitcoin price fails to reach $500,000 per coin within three years, which he later doubled to $1 million.

However, McAfee later said that his outrageous bet was just a ruse to get more followers. In April 2019, McAfee abandoned his plans to unmask the real Satoshi Nakamoto

Whatever the result, may John McAfee, crypto evangelist and anti-virus software founder, rest in peace.