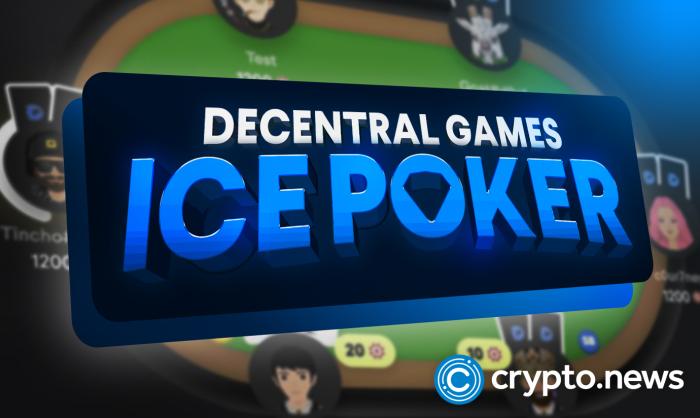 Decentral Games has announced the introduction of a new mode in its play-and-earn ICE Poker game dubbed Sit-n-Go (SNG) Tournaments. SNG Tournaments are fast-paced single-elimination games where players compete for ICE wearables, as well as ICE and xDG token rewards.

Decentral Games, a leading metaverse and blockchain-based play-and-earn gaming platform focused on building games and social experiences that reach thousands of visitors every month, has introduced a new mode in its ICE Poker game accessible via the Decentral Flex App.

Per a press release shared with crypto.news,  Decentral’s new Sit-n-Go (SNG) Tournaments, which have been in the works for quite some time, are designed as single-elimination tournaments that give players a chance to win in-game ICE wearables and earn ICE and xDG tokens rewards.

ICE Poker SNG is a six-player poker game with mandatory 10/20 chips blinds, which double every four minutes. Blinds are a mandatory bet for all players, designed to keep the tournaments fast-paced. Each game is expected to last for 45 minutes

The team says the Winners of each SNG game get rewarded with Tournament Badges, while second place gamers receive a refund for the in-game Shine they spent to join the tournament. The Badges can be redeemed for wearables, ICE accessories, ICE, and xDG tokens.

Decentral’s ICE Poker players are required to have at least an in-game wearable or Shine to join each SNG Tournament. Players must purchase either a Tournament, Flex, or All Access wearable.

However, it’s worth noting that Tournament Wearables can only be used within SNG tournaments, Flex Wearables opens access to the ICE Poker Flex APP, while the All Access Wearables can be used in both Decentraland and the Flex app.

Each tournament entry requires a certain amount of Shine on their wearable, which can be refilled using ICE tokens. Different tournaments and events have different Shine requirements, while the number of Tournament Badges they’ll win is equal to how much Shine they used.

Unlike in the Standard Challenge mode of the ICE Poker play and earn game, Decentral has hinted that the entry requirements on SNG tournaments are quite low, making it possible for skilled gamers without huge capital to play the game with just a Tournament Wearable, prove their worth in the game and earn enough ICE to acquire the Flex or the All Access Wearable.

Commenting on the introduction of the SNG Tournament mode, Matthew Howells-Barby, CMO at Decentral Games said:

We’ve listened to our community, many of whom became priced out by our regular wearables. We wanted to create a fast-paced ‘entry-level’ circuit of tournaments, which is why we developed Sit-n-Go. Thanks to the blinds and the ability to play on mobile, it’s guaranteed to be fast-paced and action-packed. Players can refine their craft and eventually accumulate enough to obtain the coveted All-Access Wearable.

Additionally, the team expects the launch of SNG tournaments to provide an additional use case and demand for the ICE token. Part of the ICE used for Shine will be burned, enhancing the token’s value and sustainability in the long run.  The ICE Poker game accounts for more than 60 percent of all daily active users in the Decentraland (MANA) metaverse.