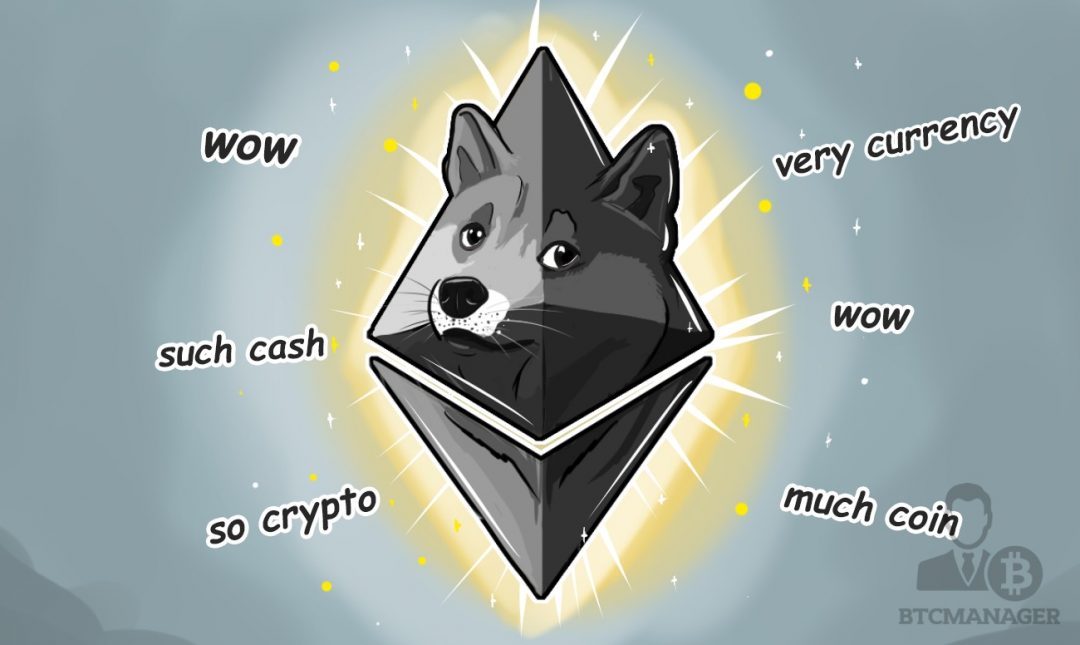 Dogecoin is known for its tongue-in-cheek approach to cryptocurrency, a light-hearted and easy way for people to get involved, was inspired by a popular meme of the Shiba Inus breed of dog. Dogecoin, or DOGE, is a relatively stable altcoin, ranked number 21 with a market capitalization exceeding $36 million. The altcoin also has a relatively high volume, with the Doge market seeing almost $1.3 million over the past 24 hours. Wow, so coin, much doge!

While most people are involved in Bitcoin because they want to see it succeed, rifts in the community are hard to avoid. Conversely, the community in dogecoin are formidable in rallying behind causes to further adoption and innovation, as is evident if you read through r/dogecoin. For example, in a Reddit post March 28, we see the emergence of an initiative to combine the dogecoin community with Ethereum, ‘Dogethereum.’

Amidst Ether’s spectacular price rise surpassing $50 and with greater exposure to the public, dogecoin is looking to find ways to ensure it remains relevant and does not fall to the wayside like many of the other altcoins from the same era. The solidarity of the community and its altruistic and fun nature may just allow Doge to keep treading the waters in the ocean of cryptocurrencies. And perhaps this explains Ethereum’s willingness to collaborate, displaying a reciprocation of the altruism of the DOGE community.

Also, cryptocurrency markets have started exhibiting heightened volatility, with the ranking of coins shifting much quicker than usual. The top 10 or so looks more or less the same, but the top 20-30 altcoins have seen a lot of shuffling over the past few weeks. Consequently, it is not a surprise to see the altcoin inspired by bitcoin look to Ethereum, which has solidified second place in the rankings.

Dogethereum is described as a pioneering ‘bridge’ between the blockchains of Dogecoin and Ethereum. Once constructed, it will be possible to send doge back-and-forth to Ethereum without using an exchange, allowing the exchange of dogecoin for other Ethereum-based tokens and use doge in smart contracts.

Jason Teutsch, Postdoctoral Fellow in Computer and Information Sciences at the University of Alabama, and Christian Reitwießner of the Ethereum Foundation have published their work detailing a protocol of how dogecoin will be received into the Ethereum network, known as TrueBit, in their whitepaper “A Scalable Verification Solution for Blockchains” The March 28 reddit post calls for help on the Dogecoin side so that “doge doesn’t get locked up in Ethereum.”

As the white paper states, 3000 ETH is set as a bounty by the Dogecoin community to build such a bridge and sets out the conditions for full interoperability:

“If Dogecoin were to enhance its scripting language with an operation indicating currency transfer to Ethereum addresses, a TrueBit contract could then confirm such transfers. The newly created dogecoin token could then be passed around Ethereum, and a final signed transaction in Ethereum could finally send the dogecoin back onto Dogecoin’s blockchain, assuming that Dogecoin miners are willing to treat the Ethereum blockchain as authoritative for such transfers.”

With such a bridge, Doge can be converted to Ethereum tokens without an exchange, allowing permeability of value between the Dogecoin community and Ethereum community, as well as projects hosted on the Ethereum blockchain, such as Augur, Iconomi, and Golem.

As it stands, the altcoin’s current mining software is oblivious to anything external to the Dogecoin blockchain, so once Doge is on Ethereum’s blockchain, it will no longer be visible to Doge miners. To bring Doge back, the miners will have to receive some sort of notification, where Teutsch suggests that there are two ways to do this:

2) Dogecoin adds some sort of smart contract functionality to its own scripting language, and then anyone can relay a “proof” back to Dogecoin that the transfer notification has appeared in Ethereum (probably harder, but nominally maintains Dogecoin autonomy).

The paper is currently undergoing peer review and Teutsch stated that, “comments on the manuscript as well as implementation ideas for the bridge itself” are welcomed.

Dogecoin currently does not support non-native tokens, so you cannot send ether into dogecoin. In order to achieve a bridge which can bring tokens into Dogecoin, Dogecoin would have to add some kind of smart contract functionality.

When asked on the point of Dogethereum, … responded framing it as a “first step” toward a universal, decentralized exchange, “Perhaps it’s best to imagine Dogethereum as the first step in a universal, decentralized exchange. Any cryptocurrency with an “export” opcode can export coins, and any cryptocurrency with smart contract functionality can import them.”

DOGE-BTC has experienced significant appreciation over the past few weeks. As noted in our weekly cryptocurrency market outlook, the altcoin has formed a bottom, after crossing above the conversion line; which points to further gains in the weeks ahead. Also, given the collaboration with Ethereum, perhaps DOGE can ride up the tailcoat of ETH-USD and gain a larger slice of the cryptocurrency market.

By improving liquidity and functionality to Dogecoin, Dogethereum may guarantee the altcoin’s relevance in the rapidly-shifting sands of the cryptocurrency market.