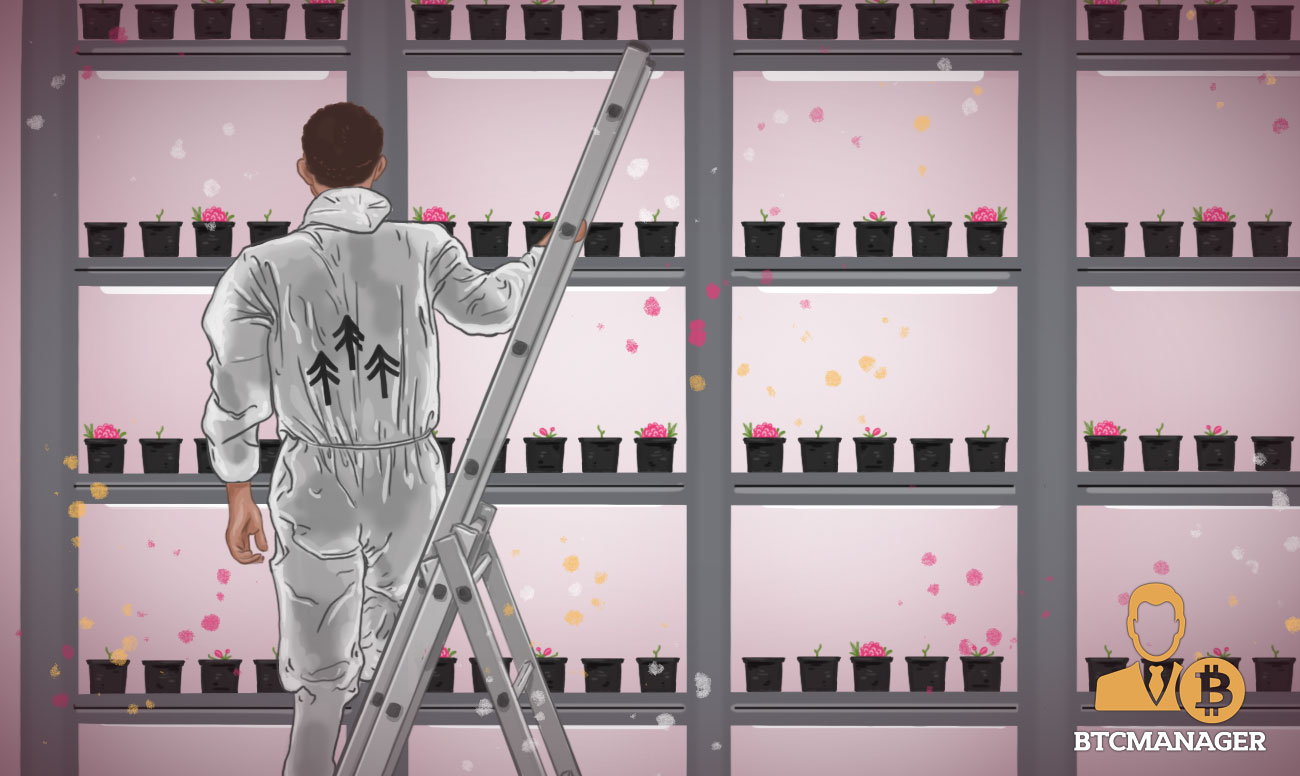 Terra0 cofounders Paul Seidler and Paul Kolling never planned on tokenizing Dahlia’s, but after meeting at Berlin’s Universität der Künste (UDK), they found common inspiration in digitizing real world commodities. At first, the implications of an economically self-sustaining forest may be far-fetched, but their first experiment, Flowerokens, gives us a glimpse into an intriguing potential future.

Seidler and Kolling were enrolled in the convergent field of arts and new media at UDK under the professorship of Joachim Sauter, founder of the digital art installation space ART+COM. Of common interest between the three were the social and economic assumptions made by new technologies. While Sauter’s generation could only experiment with pre-blockchain iterations of cryptocurrencies, Seidler, Kolling, and the third co-founder Max Hampshire, are now taking up Ethereum’s blockchain to turn science fiction into a firm reality

“We were enrolled in a course called ‘Digital Gardens/Digital Wilderness,’ at the art university in Berlin,” Kolling told BTCManager. “That’s where I met Paul, and we started to explore what would become Terra0 in 2016.”

In its simplest form, the project is an attempt to close the space between the digital and physical world. Specifically, it hopes to equip a forest with all the economic tools it would need to manage itself in society autonomously.

This could mean selling its lumber via the use of smart contracts or effectively reforest heavily harvested hectares of the land without the use of a sentient middleman. It could even buy up more land on which to expand. Karl Schroeder, the Canadian science fiction author, was the first to imagine such an “organism,” Seidler pointed out.

It’s not far off from our vision of autonomous vehicles equipped with token wallets, of which could also perform routine garage visits, provide driverless-Uber-like services, and even purchase another fleet of taxis to expand its business. While both prospects are intriguing futures, they also posit legitimate questions when it comes to mitigating the distance between strips of code and strips of paved road or physical land.

“We felt like no one was providing real-time data of the commodities they were putting on a blockchain,” Seidler said. “People are launching ‘Bananacoin,’ but the hash only gets put into a network once, regardless of the changes the banana might experience.”

Thus in the case of a decentralized autonomous organism, at least one that is as alive as, say, a forest, it would need constant attending to gather data and act upon it.

The idea that a forest could maintain itself (and capture its value) without the need for intermediaries is not dissimilar to Ethereum cofounder Vitalik Buterin’s idea of a Decentralized Autonomous Organization (DAO). In his work, cited by the Terra0 team, the Canadian-Russian whiz explained the following in 2014:

Three components suddenly emerge when considering real execution: An unstable commodity (Tree, flower, banana), hardware/software to monitor changes, and a blockchain to tokenize said commodity. Sounds pretty simple, right? Not quite, according to the founders.

“When we were looking for funding to buy up a piece of land, the administrative process was complicated,” says Kolling. “It’s difficult to buy land in Germany, let alone experiment with an autonomous forest after.”

Further to that, the technology needed to provide actionable data on something as living as a tree is still not viable. As such, many features of this project hinge more so on the need for a perfect truth-seeking Oracle (i.e., the “hardware” mentioned above by Buterin) than anything in the way of blockchain buzzwords.

After receiving general support from FZI, an informatics research group, to explore the idea, Terra0 were eventually let down by the firm when it came time to deliver a prototype. Up to that point, a piece of land in Brandenburg was offered to perform the experiments, but the two founders explained that the vision was too broad to execute.

Eventually, they were approached by a spokesperson at a16z to develop a smaller model of what Terra0 could offer the world. And herein lies the birthplace of the group’s most recent development: Flowertokens.

The convenience of Flowertokens is that it allowed all the mistakes and kinks to be exposed without putting anything (except maybe 100 dahlias) in danger. As the startup is more of an art project than a business, there was also less pressure to get it right the first time. In the financially-crazed world of emerging digital assets, this is indeed refreshing.

The concept launched on July 23, 2018, and is as follows: Tokenize 100 real dahlias as ERC721 tokens (NFTs) and allow individuals to buy, sell, and trade these “Flowertokens” for a market-determined price.

To monitor the status of the plants, viewers and token holders can watch their starlings move from seed to stems pushing through the soil as a camera positioned in front of the flower rack takes a photo every 12 minutes and updates. At the time of writing, none of the flowers have yet bloomed, and all of the flowers are kept in the Trust coworking and event space in Berlin, Germany, on a DIY rack built by the founders and volunteer work. 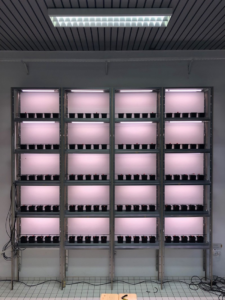 Interested parties can visit Trust and take a peek into the real-time thought experiment.

It is essential to keep in mind that although they are flowers now, in the future, they could potentially represent any number of living organisms. The founders chose Dahlias because they “(a) would bloom in a variety different colours, in order to have easily distinguishable plants, (b) would not exceed a certain height, so that 100 flowers fit on the shelf, (c) could still be planted in the current season [summer], and (d) was able to be grown inside.” Plus, tulips were too ironic.

Following their release, interested parties could purchase a flower for 0.09 ETH (which covered the costs of building the shelving structure, lighting, water, and the general expenses of the project).

When asked about the learning curve, the two explained that their project runs into barriers far beyond the world of the blockchain. In the case of establishing an actionable truth via decentralized algorithms or autonomous bots, this doesn’t exist in 2018. After that, a bit of ill-assumed cryptoeconomics generated a relatively one-dimensional token market for the commodities: holding and hype.

In the next rendition, explains Seidler, the Terra0 team will look more into how to incentivize other operations within a similar microeconomy. This could be done via the strategic burning of tokens, an unannounced “Blooming Pool” (which would give interest to holders of Flowertokens whose commodity had finally bloomed), and whatever else that could better achieve some semblance of economic velocity (assuming this is what an ecosystem of this sort demanded).

In any case, this lack of foresight also led to the value of Flowertoken 36, for instance, to touch the value of 300 ETH or roughly $141,300. While this token is still on sale, Seidler explained that the holder of the token arbitrarily determined the price. This could mean they are either eager to guard their token from purchase, bet on the project taking flight on massive wings of hype, simple irrational greed, or some combination of the three.

The capitalization of flowers is another thought piece altogether and brushes up against the moral implications of an economy moving as fast and as granular as this emerging technology portends. It’s been drawing party lines since the nineties, but now commentators can speculate (pun intended) on it’s grander trajectory. But nevermind that for now. What’s more relevant to Terra0 has to do with the trust needed before entering a trustless network: Oracles.

Oracles are the software, hardware, or human vehicles that bring information to a system. In the case of a prediction market like Augur, a software Oracle (along with community consensus) is helpful when affirming predictions about the weather. Gambling sites also need some form of an intermediary to determine whether Hertha BSC did indeed beat FC Bayern Munich.

In the case of Flowertokens, an Oracle is needed to affirm the growth, bloom, and death data of the flower associated to its token. Just as the rack of 100 Dahlia’s is photographed every 13 minutes, each flower is also documented with an SLR digital camera. These individual images are then run through PlantCV, a research platform that helps biologists measure the health of plants through variables like height and width of a plant. 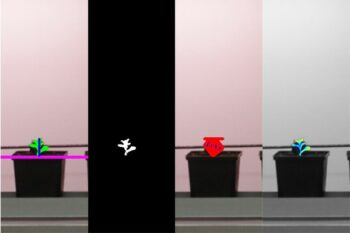 The small size of the plants makes it difficult to draw data that could affirm or reject vectors of health.

As the Dahlias began as seedlings in the experiment, much of the data collected by the camera was untrustworthy. It was only after a certain size that the information gathered revealed actionable data that could confirm growth or non-growth. This is important because it is this data (“growth_rate” and “height”) that was being used as the token’s metadata.

Each time an image is taken, it syncs with the token in question and updates the metadata every 13 minutes. In this way, despite the lack of hyper-sensitive equipment, the team could ensure that a commodity on a blockchain is indeed representative of what exists in the real world.

Seeing the Flowers for the Forest

It is an ambitious project and pushes the limits of many of the technical features surrounding the tokenization of “all the things.” It is also one of the handfuls of thought-provoking experiments in the space that looks to expose the cultural implications of the technology. If successful, it could also revolutionize the way in which we manage ecologies and styme deforestation.

On the other hand, it is also opening another path towards the autonomous capital in which an economy of machines emerges which is exclusive to humans. Something in the way of economic singularity is beyond the scope of this article but deserves attention in the context of a project like Terra0.

When asked about the end of Flowertokens, the duo explained that they would probably just shut down the system and burn the tokens. “People can also just come and get their flower at Trust,” said Seidler thus confirming the unique feature of actually bridging the digital and the physical.