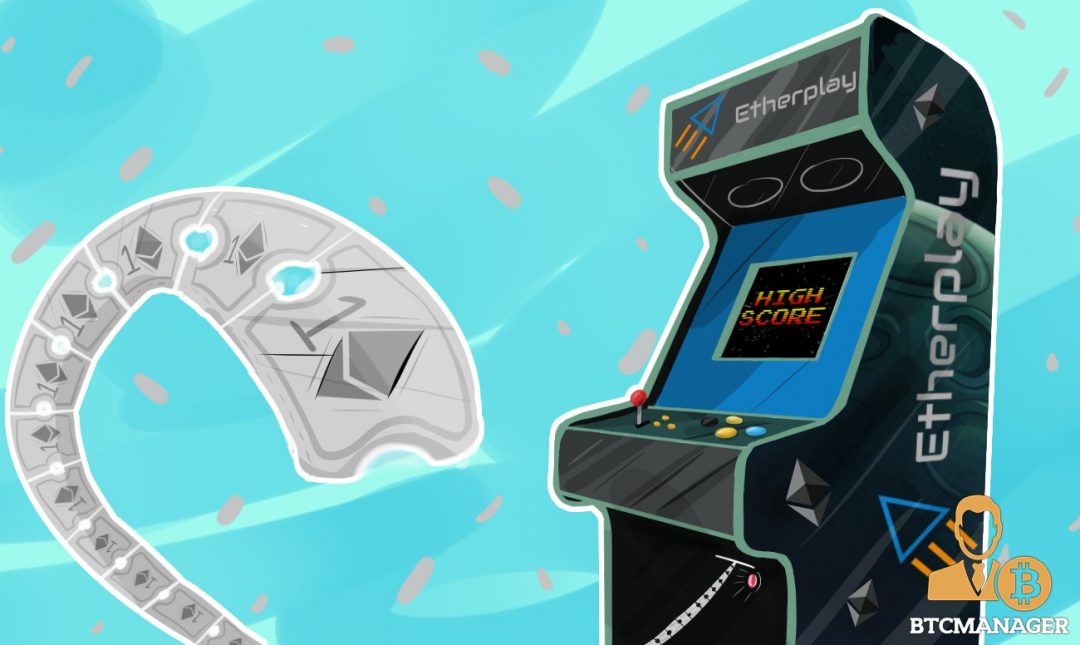 Scotland-based startup Etherplay is using the Ethereum network to power the first-ever transparent skill gaming platform built on the blockchain. The platform is reminiscent of old school arcade gaming, where gamers pay to play simple games to beat the high score. The difference is that to play you have to pay in ether and the high scorers enter a jackpot to win ether.

Etherplay’s platform is inspired by arcade gaming where gamers are able to show off their names or pseudonym on leaderboards if they hit a high score. Explaining the motivation behind the platform, the team said:

“Our first childhood video games we played were games from the arcade machines at our local fair and this is the model that inspired us. We wanted to bring back that magic to a global scale where the high score list becomes worldwide and top players get rewarded.”

Why the Ethereum Network?

The platform uses the Ethereum “world computer” as its backbone. The team believes that this enables for a transparent, free, and fair platform where players are assured of their rankings in the scoreboards. “For Etherplay [the Ethereum network] allows us to build a transparent and verifiable system. You can be sure that players are all treated equals and if we at Etherplay were trying to bend the rules, this would be visible to the whole world.”

To be able to play, users must first download an ethereum wallet such as Metamask or Mist. “Etherplay requires the use of an ethereum client like metamask or mist. The client allows the player to interact with the Ethereum blockchain which requires signing and broadcasting transaction to the available ethereum nodes on the internet.” This is because all the players’ activities are recorded on the blockchain in order to verify scores.

Once downloaded, the user must then pay a fee in Ethereum’s digital token ether to start a gaming session. The fees paid by users contribute to a money pool that goes to the top winners in the games. “In a similar way that arcade machines require you to put your money for every play, Etherplay requires the player to pay a small fee to play a game session. The difference is that the fee gets added to a jackpot that is shared among the players with the top scores.”

The Etherplay platform retains a quarter of the jackpot money in order to finance research and development for the platform. “To allow us to improve and make new games, we take a percentage of that jackpot. For now it is 25 percent (a standard for skill game platform) and we will never go bigger that this,” the team explains in a blog post.

Using the Ethereum network allows the platform to perform at a more efficient and secure level. “Ethereum reduce complexity by a great extent making our system safe and secure. By using it, we do not need to manage user accounts, nor their money. All of it is managed by the smart contract and consensus network that Ethereum provides. Players can feel confident about their security. With Ethereum there is no need for Etherplay to even have players’ accounts in its system.”

In addition, the Ethereum network creates a superior platform since it “allows Etherplay to pay the players automatically. This is a significant advantage over other skill game platform where players are required to have a minimum amount to withdraw to cover the cost of traditional currencies transaction.”

Lastly, Ethereum’s blockchain assures the players that the scores are accurate. This is important as many game platforms are mired with accusations of score tampering, especially where rewards are involved. Using an immutable network prevents this. “Ethereum allows Etherplay platform to be transparent and verifiable. Every transaction is verifiable and traceable on the ethereum network. Since our system records all the data, it is possible to verify if the correct players got the reward.”

The Etherplay platform was officially launched in January 2017 after initially running two beta versions. The platform was positively received as was evidenced by the numbers generated in March, two months after its launch. “The platform ran a total of 10 competitions which rewarded the best players with more than 55 ether. In total, we had 514 unique addresses of which 265 have registered a nickname that played more than 5000 game sessions totalizing almost 8000 transactions.

Etherplay currently has two games available, with more on the way. “Catch Me” is their first game, developed internally by its team. The game features a character that the player can move around the screen in order to catch treasure, which is in the form of ether’s logo. The player must dodge rocks, black holes, and predators during the gameplay to avoid death. 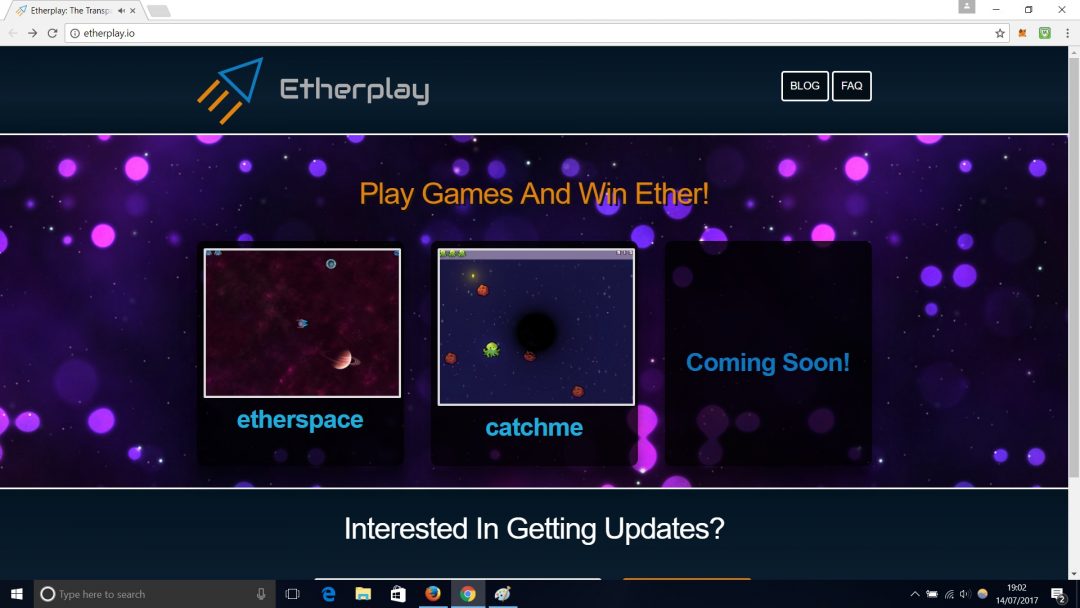 The second game is named EtherSpace. This game features a spaceship that the player uses to move around, dodging and blasting space rocks. These space rocks can be blasted until only an ether token symbol remains which the player picks up for points. 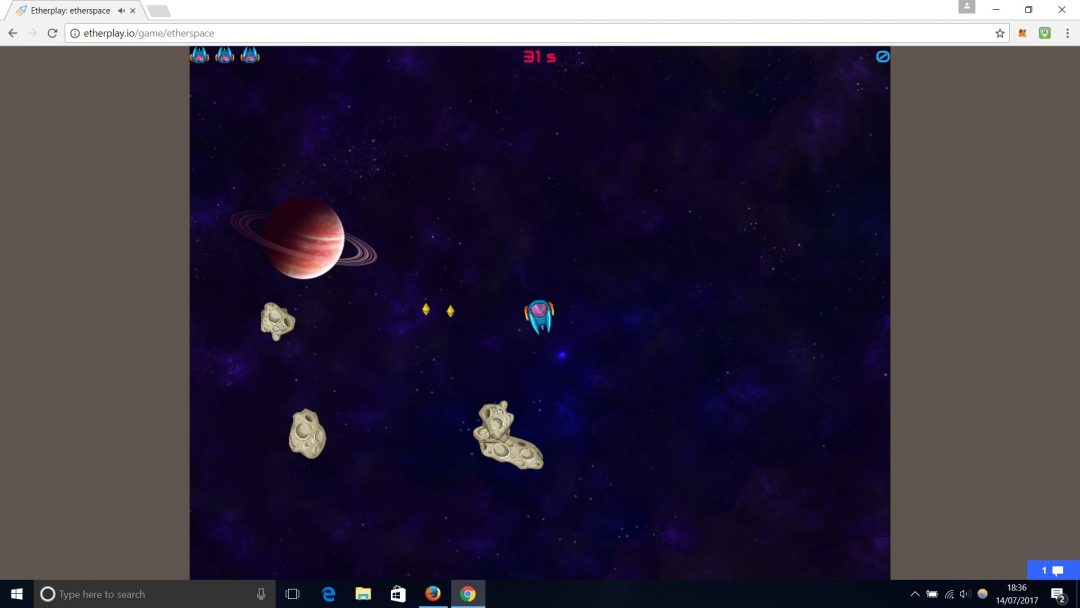 Both games show the size of the jackpot to be won as well as the duration of the competition. The games also show how much ether one must pay before playing. At the time of writing, the fee to play stood at 0.0093 ETH per game.

In order to increase the number of games available, the team is also building more of its own games as well as opening up the platform to third-party game developers. “We are working on streamlining the process of adding new games so it become easy to integrate with our system without the need to know about Ethereum.”

On the potential for a greater array of genres, Erwan Sanford, co-founder of Etherplay, told BTCMANAGER via email

“Racing and First person shooter are the kind of games we want for our platform and we will definitely doing those. Racing is one of the type of games we are planning to do not so far in the future. We are currently working on a shmup game (not first person). We are still looking for third party developers, when we will start a cooperation we will inform the public.”

Etherplay is digitizing traditional arcade gaming using the Ethereum network, with the added incentive of reward high scoring gamers with actual winnings paid out in ether. As more games become available and user numbers increase, the platform has the potential to become a major Ethereum project given the popularity of online gaming.