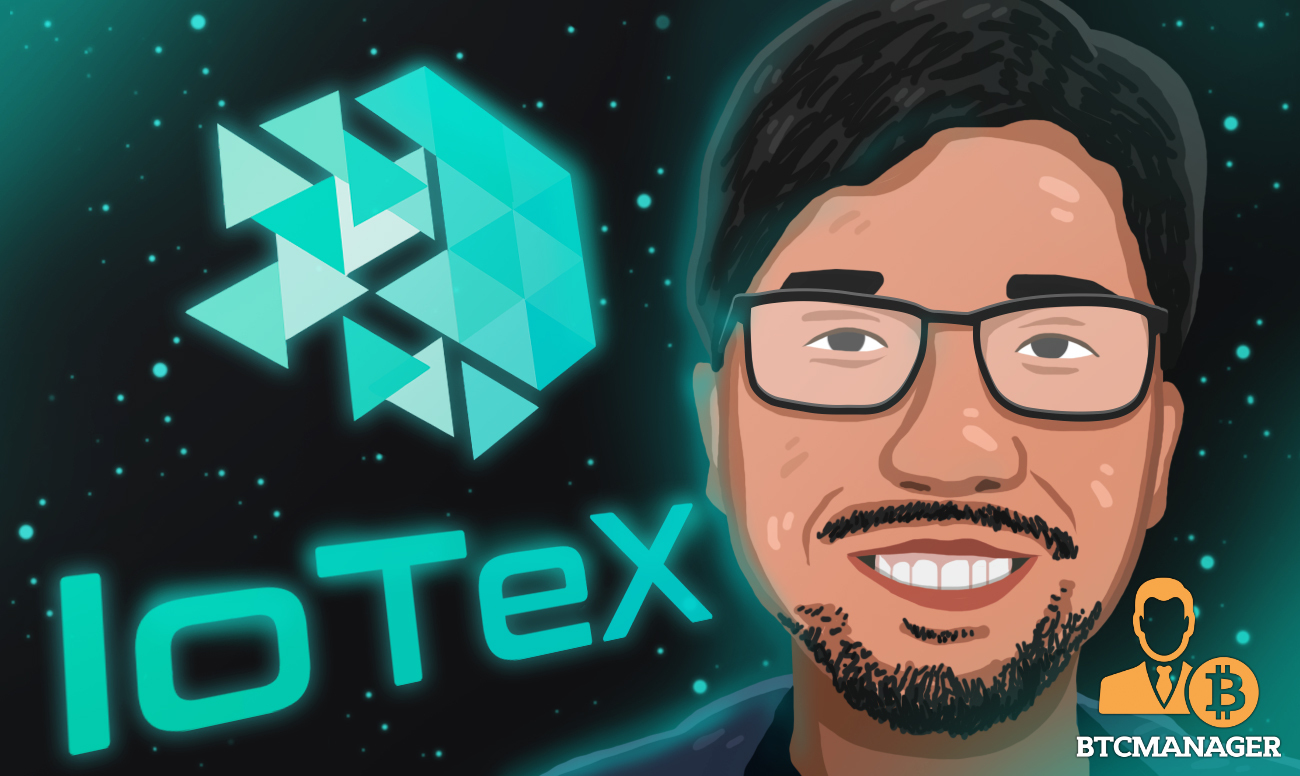 Raullen Chai is the Co-founder & CEO of IoTeX, a leading blockchain & IoT platform that is empowering the Internet of Trusted Things. Raullen received his Ph.D in Cryptography from University of Waterloo and served in Tech Lead roles at Oracle and Google from 2012-2016. Most recently, Raullen was the Head of Cryptography R&D at Uber before co-founding IoTeX in 2017.

What is your vision for IoTeX?

By 2025, more than 75 billion smart devices will form the global Internet of Things (IoT), which McKinsey estimates will be valued at a staggering $11 trillion. However, there are massive gaps in security, privacy, and interoperability that limit the potential of IoT, especially for everyday people and businesses. For the past decade, centralized corporations have introduced smart devices that spy on our personal lives and mine our data with no benefit/value returned to users. If this continues, the IoT and the $11 trillion in value it represents will forever be controlled by profit-hungry institutions, not users. IoTeX is here to ensure this doesn’t happen.

IoTeX is building the Internet of Trusted Things, an open ecosystem where humans and machines can interact with guaranteed trust, free will, and privacy. We envision a future where self-sovereign users can own and control their smart devices, as well as the data and value they generate. We believe everyday people and businesses, not profit-hungry institutions, should be the ultimate benefactors of the future machine economy. Using blockchain and secure hardware, IoTeX not only addresses the current IoT’s shortfalls in security, privacy, and interoperability, but also empowers users to capture data/value from their devices and utilize it in next-gen DApps on the IoTeX platform.

Tell us about the team behind IoTeX.

Making blockchain + IoT a reality is hard. It requires a team that not only drives cutting-edge research across both blockchain and IoT, but can also apply this research in the form of real-world products. Bringing blockchain + IoT to life is truly a full-stack effort across software and hardware and everything in between! Over the past three years, IoTeX has formed an all-star team that deeply understands the nitty-gritty details of cryptography, high-level architecture of large-scale IoT systems, and application of blockchain in real world settings. IoTeX is *the team* to bring blockchain + IoT to life — and we are already well on our way.

The IoTeX core team is a passionate and award-winning group of 30+ cryptographers, engineers, and ecosystem builders that left leadership positions at Google, Facebook, Uber, Bosch, and more to build the Internet of Trusted Things. Our executive team also currently leads some of the world’s premier industry consortiums, including the IIC, IEEE, and CCC, which exemplifies the seriousness and sophistication of IoTeX technology. See the full team here.

What is your favorite memory of your time at IoTeX?

IoTeX started almost three years ago as just a line of code and has evolved into one of the most unique and performant Layer 1 ecosystems in the world. Last year was an expecially fast-paced year for IoTeX — we launched our fully native Mainnet GA, the first “Powered by IoTeX” device called Ucam, and innovative cross-chain tools like mimo DEX. The common denominator across these major launches is they are all production-ready products that give a glimpse into the future of IoTeX. With Mainnet GA in place, IoTeX is planning for an even bigger 2021 with more devices, assets, DApps, and cross-chain integrations whose impact will be even greater as we start to capture network effects. This is why I believe my favorite memory for IoTeX is still to come — the blood, sweat, and tears we put over the past 3 years to stand up our one-of-a-kind ecosystem is simply the starting point. The future is what excites me the most, as we continue our journey to make IoTeX the economic backbone for millions devices/machines that will underpin the new decentralized machine economy.

How does IoTeX differ from other IoT-focused blockchain projects in the industry?

There are many IoT-related blockchain projects out there, but nobody is doing what IoTeX is doing. IoT is a massive industry that is still nascent and being explored — while most projects are focusing on micropayments or connectivity, IoTeX is uniquely focused on empowering users to own their smart devices, as well as the data/value they generate. Over the past three years, IoTeX has researched, built, and integrated best-in-class technologies that align with our focus, including blockchain, decentralized identity (DID), and secure hardware. In 2021, we will further evolve our tech stack with the world’s first verifiable, real world data oracles and decentralized autonomous machines, which will solidify IoTeX as the top platform for Web3-IoT.

Today, “proof of product” is more important than ever when evaluating blockchain projects. While several Top 50 market cap projects are stuck decentralizing and adding smart contracts to their protocols, IoTeX is already launching first-of-its-kind products like Ucam and Pebble Tracker on our fully decentralized Mainnet, which has been running error-free since April 2019. This is because from Day 1, IoTeX has been laser-focused on our mission to make blockchain + IoT a reality. Now that we’ve proven that blockchain + IoT is real, we are turning our laser-focus towards empowering others to build next-gen blockchain + IoT products on IoTeX.

Who are some of IoTeX’s biggest partners to date?

​Ucam is a “Powered by IoTeX’ security camera with 100% privacy and user data ownership, built in partnership with Tenvis, a global security camera enterprise founded in 2005. As one of the first blockchain-powered products for mass market consumers, Ucam received the CES Innovation Award and has sold thousands of units on Amazon.com and global retailers. Ucam exemplifies IoTeX’s innovative spirit and is a fantastic example of how IoTeX technology will transform the Internet of Things; however, we have even greater goals in 2021.

This year, IoTeX is launching Pebble Tracker, built in partnership with Nordic Semiconductor, a leading IoT chip manufacturer. Pebble Tracker is the first “real world data oracle” that captures/signs real world data (e.g., GPS, temperature, humidity, air pressure/quality, motion, light) and transmits it to the IoTeX blockchain in a way that is verifiable, and therefore trusted, by anyone. From medical supply chain to crowdsourced datasets to user-owned machine learning models, the verifiable data from Pebble Tracker will fuel the next generation of trusted blockchain & IoT. We encourage anyone that is interested in building a custom project or joining a community project to purchase Pebble Tracker on CrowdSupply now!

IoTeX also holds leadership positions in premier industry consortiums and standardization bodies, such as the IIC, IEEE, and CCC. For example, IoTeX is currently the Co-chair of the IIC’s Blockchain Group alongside Amazon & Huawei — through these enterprise-focused consortiums, IoTeX works side-by-side with the largest corporations in the world to design new use cases and establish future standards for blockchain + IoT. We have also partnered with enterprise members of the IIC, including WISeKey, a leading IoT chip manufacturer.

What is the utility of the IOTX token? Can investors stake IOTX for passive income?

The IoTeX Network is fueled by the native IOTX token, which has multiple forms of utility in the IoTeX Network. IOTX is the native currency of the IoTeX protocol and instills economic and reputational incentives across users, DApp builders, and Delegates (miners) to ensure IoTeX is governed/maintained in a decentralized fashion. Token-holders can stake/vote using their IOTX for passive income, as well as spend IOTX to access IoTeX DApps and services. The IOTX token is also deflationary thanks to our Burn-Drop tokenomics, where IOTX is burned for every new device that is registered to the IoTeX Network. As the number of devices and DApps that are “Powered by IoTeX” grows, the demand and value of IOTX will also grow, providing continued incentives for token-holders to maintain and grow the network. Learn more about the utility of IOTX here.

IoTeX is already one of the most unique and reliable blockchains in the world, powering a diverse ecosystem of devices (e.g., Ucam, Pebble Tracker), DApps (e.g., mimo, Cyclone), and services (e.g., ioPay, ioTube). But we are still early on our journey — IoTeX has an ambitious roadmap in 2021 to bring us closer than ever to the Internet of Trusted Things.

In 2021, we will also prioritize hyper-growth of the IoTeX Network by strategically onboarding partners/communities and enriching our user-facing tools for seamless onboarding to IoTeX. The IoTeX brand will become synonymous with quality, innovation, and trust. For more details, see our 2021 roadmap!