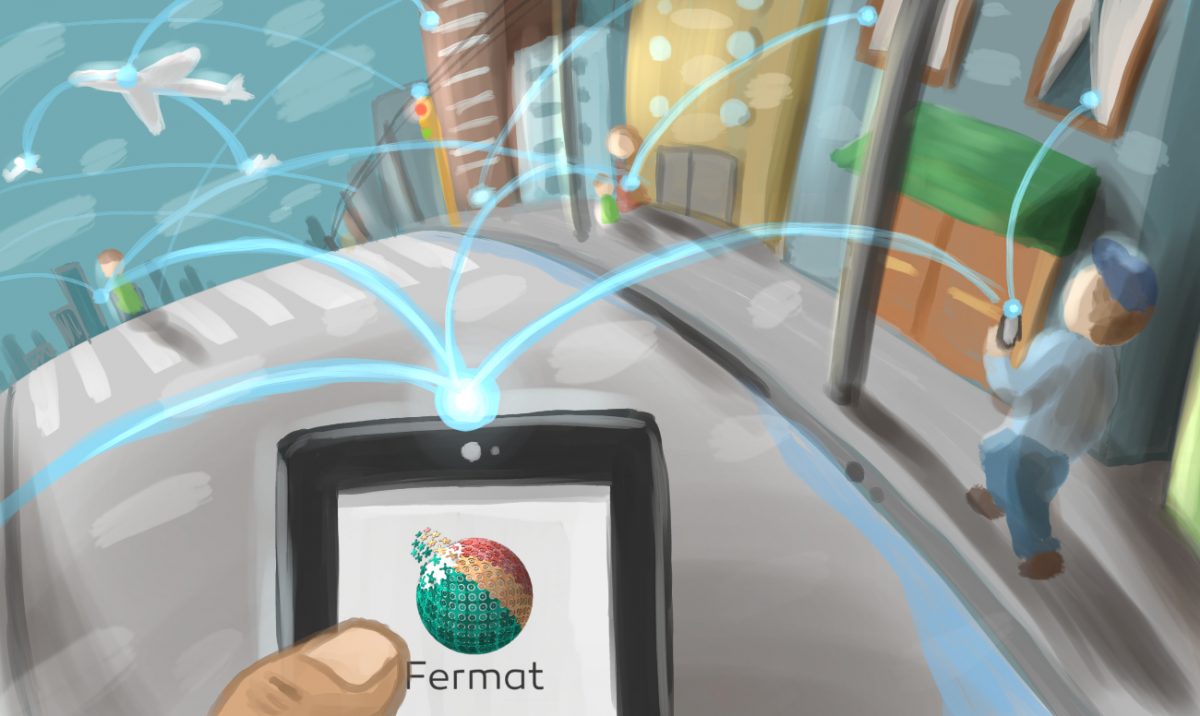 Imagine life in a global, peer-to-peer economy. A system where all citizens could hold direct control and ownership of their purchasing power. Where  anyone, anywhere, could find, communicate and facilitate transactions with others without interference from third parties or privacy risk concerns. Whether a job seeker, apartment owner, doctor, rideshare driver or even someone looking for love online, the opportunity exists to transact openly in a free market environment without unnecessary rules, barriers and constraints.

This Utopian vision may soon become a reality with the groundbreaking initiative being pursued by Fermat, arguably the largest open-sourced project on the blockchain. On Tuesday April 26th, Fermat released a landmark white paper articulating the details of this movement along with an invitation for enthusiasts to participate.

A decentralized and blockchain-fueled app platform which has existed in proof-of-concept mode for two years, Fermat has now officially launched in alpha-testing mode. This app ecosystem signals a new day for peer-to-peer exchange, one supported by a collaborative, component-based design where incentives are tracked and paid over the blockchain.

Fermat (a name derived from a French attorney/mathematician) is comprised of a team of over 60 full-time developers, designers, and other experts busily crafting what has been described as a new “Internet of People.” The working goal of this collective is to eliminate the need for third-parties and other intermediaries, thereby opening up unprecedented digital ownership and monetization possibilities for the community. This blockchain system will be user controlled, censorship-resistant and flexible in its engagement model.

Recently, BTCMANAGER had a one-on-one conversation with Luis Molina, the CEO and visionary leader of Fermat from his home in Budapest. Born in Cordoba, Argentina. Molina matriculated to Europe following a career at the Latin-American based Kepler Technology. He also had a stint with Frame Labs, an internet banking and security system consulting firm that he founded.

In 2014, Molina moved to Hungary to launch the Fermat movement. “It was three years ago while working on a project in Dubai where I discovered bitcoin,” says Molina. “Because of my background in technology I felt compelled to figure out how to get bitcoin mass adopted. Because I’m an idealist that sees opportunities to produce change, I spent more than a year just researching and attempting to figure out this problem.”

Molina found  this riddle to be a complex and daunting task. Nevertheless, what ensued from his investigatory work was the seed for starting Fermat, a peer-to-peer movement predicated on the use of mobile devices. “What was needed I discovered was some system that interconnects phones with each other without going through a third-party web server or infrastructure. In other words a peer-to-peer network for interconnecting people with each other. Doing this opens up a whole new universe of opportunities.”

Molina says the beauty behind all of this is that much of the software code already exists to make this a reality sooner rather than later.

There is a whole universe of applications that can be built off of existing code. We found that if we can capitalize off of code that has already been replicated in another application then we can do things much faster. This reuse across other applications saves time and money and prevents us from having to reinvent the wheel.

Fermat’s main strategic advantage, according to Molina, is this code reuse at an application level.  “If we were to build, for example, an AirBnB peer-to-peer application on top of Fermat, then it would become very easy for a developer to niche that application and create a dedicated component for a customer.”

It’s here where he says cryptocurrency aligns nicely with the Fermat model which will manage the delivery of micropayments from all over the world to anyone creating these components. The engine for this and for all of the other intricacies of the Fermat system  is a dedicated application token, similar to that used by Factom.

“Yes, we maintain a blockchain in our own peer-to-peer network that is a conduit for the interconnection of devices. It’s not designed to be a payment processing or smart contract execution network. Rather it’s a network that just connects phones and their applications with each other”

The processing of these tokens, he says, is done via the bitcoin network as a colored coin. “This token helps us to bootstrap the network and put people to interconnect between each other. It also enables micropayments to be sent to authors of the components.”

Charting The Next Phase of Fermat’s Evolution

The main philosophy driving Fermat’s evolution says Molina is what he affectionately calls the “Internet of People.”  The goal is to produce a full-scale network which runs on end-user devices, thereby allowing people to connect globally in a peer-to-peer way.

Molina says that as the Fermat project has evolved from its early beginnings, growing numbers of people via word-of-mouth have joined to contribute — first in Argentina, then in the rest of Latin America — and now throughout the rest of the world. He says that he hopes many more will join, offering much-needed help with such a large project.

“From artists to engineers, everyone is invited. We are in particular need of analysts, people who can provide a broader analysis of what we’re doing, as we try to manage a complex system that is moving fast.  We’ve got several projects running at the same time, about 10 or so — some involving applications that have already been built while others entailing more lower level infrastructure. So our needs are great.”

System development efforts have been quite challenging at times, particularly at a technical level, where lots of components have been built by so many people. The system, says Molina, is very disruptive and is often headed many directions at the same time. Nevertheless, he believes that the community is a key component to making this happen.

The challenge is truly colossal, but with a lot of hard work, we believe we can accomplish this. We won’t stop until we make it happen.