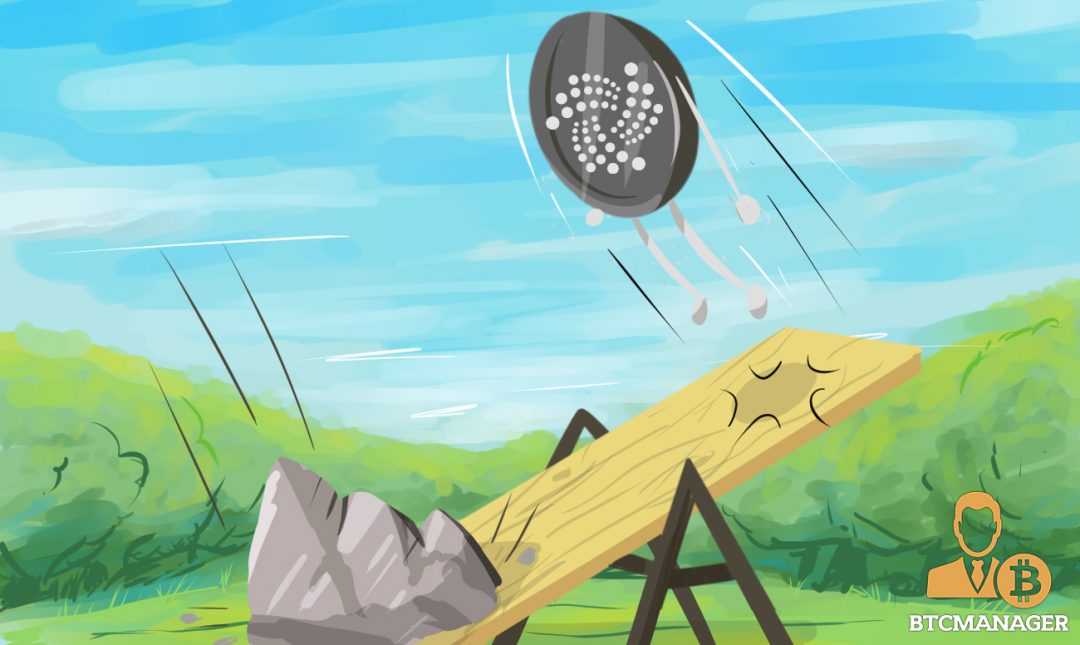 Because of a bug, the IOTA developers shut down the coordinator of the cryptocurrency. As a result, the official wallet of IOTA was not able to accept transaction confirmations for a few days. Today the situation seems to be ok; the price was not adversely affected by the drama.

IOTA is a relatively new cryptocurrency with a lot of passionate fans which believe that its tangle architecture makes IOTA by far the most scalable cryptocurrency. This enthusiasm and some industry cooperations helped IOTA to climb to rank 11 in the ranking of Coinmarketcap with a cap of more than $1 billion.

Recently IOTA received terrible news when some MIT researchers publicly voiced harsh and comprehensive critiques. The criticism has been partly appropriate, partly blown up, but caused a lot of drama in and around the community. In the past week, IOTA again faced agitation; the official wallet has not been able to confirm transactions for some days; deposits and withdrawals on exchanges have been suspended, and a major tangle explorer showed a frozen network as of October 25.

How an Attack forced the Developers to Shut Down the Coordinator

What is happening with IOTA? Since the basic architecture differs much from established blockchain networks like Bitcoin or Ethereum, it is not easy to say. However, there are indicators that the situation is not as worse as it seems at first sight.

Let’s start with how it began. Around October 20, there had been an attack on IOTA. The attack exploited a bug, which was “related to the key re-use issue from the previous snapshot.” This is all that the official post of IOTA says. Now, there is no clear description of the bug; the developers are still analyzing it. However, it seems to be clear, that the bug could result in some addresses losing IOTA tokens.

To prevent that the attack caused more damage, the IOTA developers shut down the central coordinator. Roughly said, the “coo” takes snapshots of the state of the network, which are accepted as milestones by the wallet. The coordinator protects the network against some attacks, which are possible in the early state of IOTA. Sometimes these attacks are referenced as “34 percent attacks,” because as long as IOTA is small, the tangle can be attacked with fewer network shares as needed for blockchain-based cryptocurrencies. However, the developers say that these attack opportunities will vanish once IOTA has grown to a certain size.

Currently, the coordinator is used to support the network to confirm transactions. As the explorer was shut down for several days, IOTA tangle explorers like iotasear.ch showed that there were no new transactions for nearly two days. This created the impression that the whole network had been down for some time.

Only the Official Wallet is Affected

IOTA developer Dominik Schiener commented in a chat, that “confirmations have been stopped, but the network did not shut down.” According to Dominik, IOTA remained fully operational the whole time.

He explained that the users can decide if they want to use a network with a coordinator, or without. Another IOTA developer, Come from Beyond, adds that only wallets which are based on the coordinator’s milestones had problems with confirmations, while other wallets, which use the whitepaper algorithm, were not affected.

The official IOTA wallet, which is released by the developers, only accepts balances if they are confirmed by the coordinator. However, this is more on the level of the Graphical User Interface (GUI). When you have the key to an address, you can access your token without a coordinator. To do so, you just need to take another wallet – which likely does not publicly exist – or change the code of the existing wallet. However, doing so can lead to a lack of double spending protection. For this reason, the IOTA developers required exchanges to suspend deposits and withdrawals.

Back to Normal, Funds Recovered

According to the IOTA blog, the coordinator was reactivated October 23. On October 25, the developers released a new IOTA client, with which the network “resumes to normal operation.” Balances, which have been on addresses affected by the bug, have been transferred to addresses controlled by the IOTA foundation. The owners can recover their coins, without risking them to be stolen by an attacker.

IOTA users report that everything is working fine again. Some say, their node remained operational for some parts while the coordinator was shut down. Exchanges like Bitfinex, for a while, did not process deposits and withdrawals, but it is said that Bitfinex booted its IOTA node again.

No Panic, No Loss of Trust

It’s not entirely clear what happened in detail, and how the coordinator, the bug, the attack, the nodes, and confirmations interacted. At least, for outsiders. Also, it is still to be said, what you should make of the observation, that the developers are able to shut down important parts of the system and to “rescue” balances by transferring them on addresses controlled by themselves.

Most members of the IOTA community resisted panic. They did not lose trust in the developers; most seemed to be happy how they handled it, and are still waiting on official statements regarding an analysis of the bug. There have been no reports of users losing funds due to the incident.

Therefore the price did not react strongly to the temporary shutdown. Like all altcoins, the price in bitcoin fell on October 23 to a low – around 5314 satoshi’s – but recovered in the following days. It’s a little bit weird to see that IOTA had one of the most robust recoveries of all altcoins, reaching 8000 satoshi’s again, while still being in a state of partial shutdown. But no one ever said that crypto markets are rational.