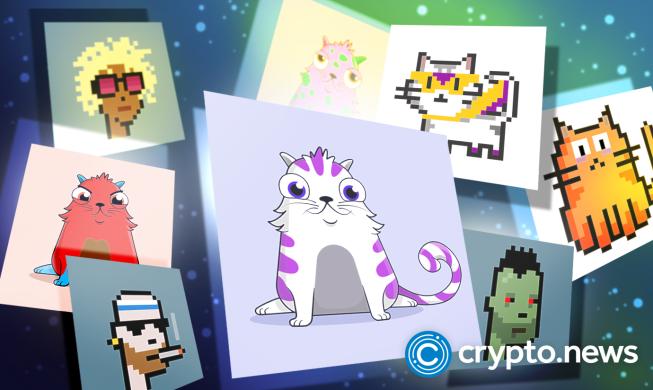 Like all NFTs, CryptoPunks, CryptoCats, and CryptoKitties are blockchain projects that have boomed in the crypto space and made investors high returns. All three pose the same characteristics, but each NFT success’s track record tells a different story. So, how did each start, and how are they faring today?

CryptoPunks made its first NFT release in 2017 as an experimental project from Larva Labs. The NFTs are 24×24 pixel images running on the Ethereum blockchain as ERC-721 assets. Operating on Ethereum’s blockchain helps the project maintain transparency since it records every proof of ownership.

CryptoPunks gained its inspiration from various scenes that relate to the cyberpunk movement. The inspirations included scenes like the Blade Runner movie, the Neuromancer novel, and Daft Punk.

According to the project, only 10,000 characters will be available in the market. Back in June 2017, users received these punky-looking characters for free. Any user with a digital wallet and a considerable minting fee had the biggest chance of receiving one at the time.

Lithograph artistic designs were also part of the CryptoPunks project. In total, Larva Labs released 24 lithographs of NFTs with the founder’s signature. More, each art came with a sealed envelope containing the asset’s private keys.

Since the keys ascertained the users’ ownership of the lithographs, they appealed to more investors. For instance, in a 2021 auction, five lithographs were sold between $190k and $290k.

CryptoPunks are divided into five categories: male, female, ape, zombie, and alien. Each asset comes with unique attributes and accessories. However, an NFT will become more valuable depending on its category.

Male CryptoPunks are the most common assets in the projects since they are 6039 in number. The number of female, zombie, ape, and alien punks available include 3840, 88, 24, and 9, respectively. Thus, regarding scarcity, alien NFTs are more valuable than male punks. At one point, an alien NFT was sold for $10.67M.

A punk’s attribute can further help underpin its value in the market. These characteristics make the NFTs rare without looking at their category. For instance, punks that wear beanies are only 44 in number. A male punk, considered the most common NFT, was once sold for $660,121 because it had a beanie.

In some cases, an NFT may not have any attribute at all. There are only eight punks with zero characteristics, which makes them more valuable.

Yuga Labs moved to acquire Larva Labs in March 2022. In a blog, Larva admits that it actively sought an appropriate management solution.

Yuga Labs was the best option since it is a significant innovator in the Profile Picture Projects (PFP) field. Today, the IP of CryptoPunks belongs to Yuga Labs, and the firm hopes to grant commercial rights to users moving forward.

CryptoKitties made its first market appearance in 2017 through a Canadian-based firm, Axiom Zen. The founders needed to develop an ETH game allowing users to own and create virtual cats. Moreover, each cat would have different features that make them distinct.

The project’s smart contracts hold specific genomes that match every available CryptoKitty. Users can breed their NFTs through a genetic algorithm to produce offspring where the new kitty will have the same visual appearance as the smart contract genome.

This problem led to the migration of CryptoKitties from Ethereum to a new blockchain dubbed Flow. Interestingly, the new blockchain is an original creation from the CryptoKitties team (Dapper Labs). The Flow came with advanced features that made it fully effective. The features include 3D designs for CryptoKitties, scalability, and the ability to use these NFTs on any Flow-based game.

CryptoKitties also had notable design collaborations with various figures. At this stage, the idea was to evolve CryptoKitties into another NFT class known as collectibles. In that respect, CryptoKitties introduced a pair of NFTs inspired by Muse, a British rock band.

The other collaboration involved a Chinese artist called Momo Wang, whose limited-edition NFTs were featured on an art marketplace dubbed Nifty Gateway.

CryptoKitties made more than 700k sales by July 2022. The trading volume, on the other hand, stands at 67,818 ETH. Going by the current market price, this amount is equivalent to $115M.

The project also got into partnership deals with Animoca Brands and the National Basketball Association in 2022. Such partnerships help Dapper Labs build and improve the Flow network.

CryptoCats launched their first 12 NFTs on Ethereum in November 2017. The cats launched as 8-bit characters and as a fork that originates from a CyberPunk kitten. The second batch of NFTs came the same month it released its first set of cats. On the second release, CryptoCats unveiled 177 more NFTs with the title ‘Australia Blockchain Edition.’

The third set of CryptoCats launched in December 2017 with a minting fee. Implementing a minting fee means the project was ready to take advantage of the cats’ demand. Nonetheless, the third edition wasn’t very active as the first two releases. The project had lower sales until March 2021, when users spent nearly $100,000 on the digital cats.

At present, CryptoCat is still operational, with ABXY Labs as its collaborative partner. The project plans to incorporate NFTs in the gaming industry as time progresses.

In general, the three projects sparked a new era of NFTs and digital ownership of assets. Users worldwide still make fortunes on these virtual assets despite each having unique attributes.

What’s even more astonishing? The fad going on about NFTs doesn’t seem that it will blow off anytime soon. Today, the NFT space has a market cap of $21B. This value is projected to spike since more enthusiasts have started to embrace the concept of NFTs.

How do CryptoPunks, CryptoCats, and CryptoKitties differ?

CryptoPunks are over 10 000 pixel images with 24 by 24 measurements, representing different characters, including but not limited to males, females, aliens, and zombies. CryptoKitties is an NFT game representing kittens that users acquire and nurture. Lastly, CryptoCats represent cat images of all types, sizes, and colors.

How can I acquire any of the three NFTs?

For CryptoPunks, click here for a detailed procedure to get any of the NFTs. You should note that they vary in availability depending on the background color. For CryptoCats, click here to view the available cats on sale in the OpenSea marketplace. Lastly, learn how to play and acquire CryptoKitties from here.

What led to Larva Labs’ acquisition by Yuga Labs?

According to Larva Labs, its team was not fitted for the role that CryptoPunks and Meebits needed in engaging the community. After its introduction to the markets, the team did not expect the worldwide acceptance of the NFTs, making it bigger fish to fry on their end.