Established by an unknown 21-year old enthusiast, Satoshi’s Place demonstrates the power of micro-transactions with the Lighting Network under the guise of an advertising space. Interestingly, the board resembles a graffiti wall instead of a marketing platform, additionally making for a source of entertainment.

Lightning in an Advertising Bottle

Satoshi’s Place proudly wears its influences on its sleeves, closely resembling the One Million Dollar Homepage and Reddit Place.  But despite its seemingly chaotic and almost too colorful presentation, the Satoshi’s Place is a Bitcoin-based advertising grid whose Lightning-powered heart consists of 100 blocks.

The cells are the center of attention, and make up an artboard canvas with one million pixels offered to enthusiasts to paint for one satoshi per pixel, equivalent to a fraction of a USD cent. 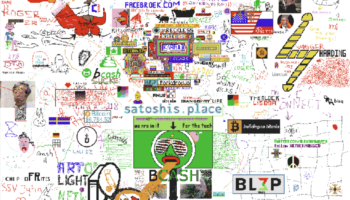 Claiming cells are the building blocks of Satoshi’s Place, and companies can essentially acquire advertising space for their projects. Eventually, 20 percent of revenue will be reinvested in advertising the platform itself.

While the platform is more of an advertising tool than an investment, early bird cell buyers can sell their space to firms in the future, purportedly for a higher price than originally paid. The platform is visited daily by 1500-2000 visitors.

Each cell consists of 225  15 x 15 pixels with no restrictions on the type of content. Presumably made by a member of the Lightning community, the effort approaches advertising as an expression of creativity that runs on the very fuel it consumes for its operation.

In the Wake of Internet

Closely simulating the mysterious creator of Bitcoin, the owner of Satoshi’s Place is a self-described 21-year old from Europe who built the project for funding his education. For him, the cause of Satoshi’s Place is not only a monetary one, as the project serves to raise awareness about Bitcoin’s innate features, such as secure payment paired with flexibility to guide the marketing of tomorrow.

The fact that Bitcoin world may appear too anarchic to be palatable to everyone’s taste is merely a temporary stage in its wider acceptance by the society as a whole. The Internet itself went through such a phase two decades ago, and Satoshi’s Place may well end up as “a little part of (Bitcoin’s) history itself.