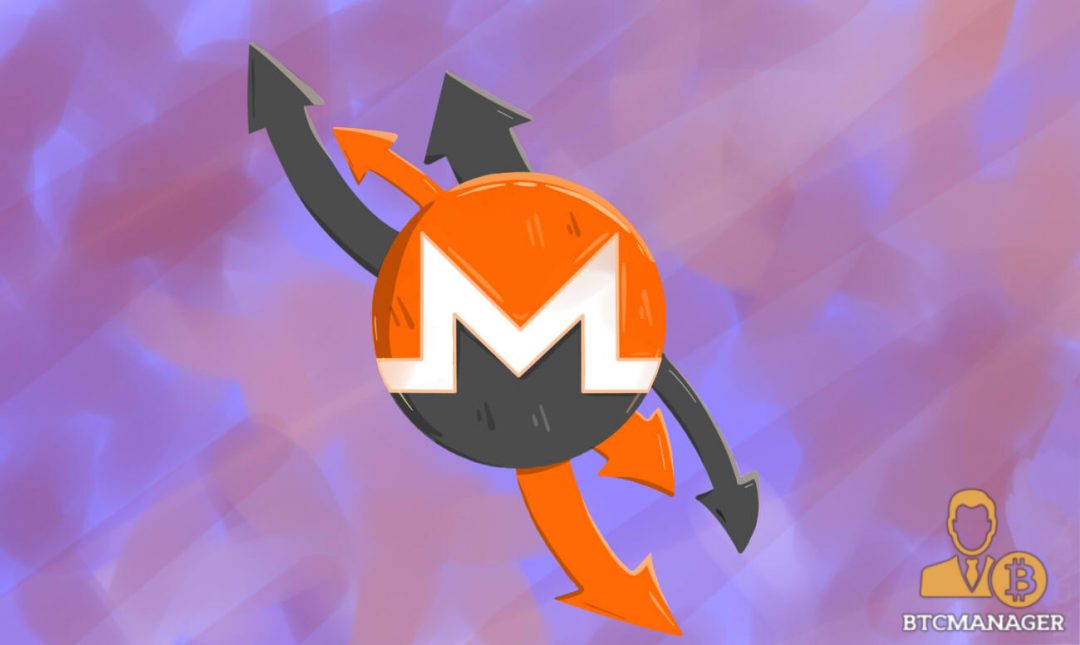 On April 6, Monero conducted its bi-annual scheduled upgrade, or hard fork, to increase the minimum ring size and alter the Proof of Work to nullify Bitmain’s ASIC miners. As for the success of the move, the next ten days or so will inform us of the effectiveness of the controversial decision by the Monero developers to stamp out ASICs, and whether their suspicions are confirmed.

The Effort to Rid ASICs from Monero

The hard fork took place on the morning of April 6 on block number 1,546,000 after a lengthy debate on the desirability of a move to nullify ASIC miners. It is thought that the massive increase in Monero’s hashrate toward the end of 2017 were ASIC miners mining secretively. Bitmain only announced their miners for sale on March 15, after the developers decided to change the Proof of Work algorithm as indicated by a post from February. The tweak does not affect GPU or CPU miners, but only affects ASICs.

The expected effect is that the hashrate will eventually decline massively as ASICs are booted off the network, as well as miners updating their software and switching over. Botnets are also expected to decline as the operators will take some time to find ways to upgrade. The proportion of the unknown source of Monero’s hashrate that is either ASICs or Botnets cannot be accurately determined, but the inability of ASICs to upgrade will reveal approximately how much of the network hashrate they were responsible for.

If the hashrate loss is persistent when comparing the network’s state around five to ten days after the hard fork (April 11-16) compared to pre-fork, then we can be pretty sure that Bitmain were using their ASICs to secretly mine monero. On the other hand, if the hashrate is not affected much and the trend continues, then we can be certain that ASICs were not operating on the Monero chain.

Already, we can see some pools have lost a significant share of the hashrate, with Minergate suffering the biggest loss. According to mineXMR.com, the current difficulty is too high and wrongly suggests that hashrate is near 1.1 GH/s, but calculations from users on Reddit indicate that the figure is much lower in practice, in the hundreds of MH/s range. 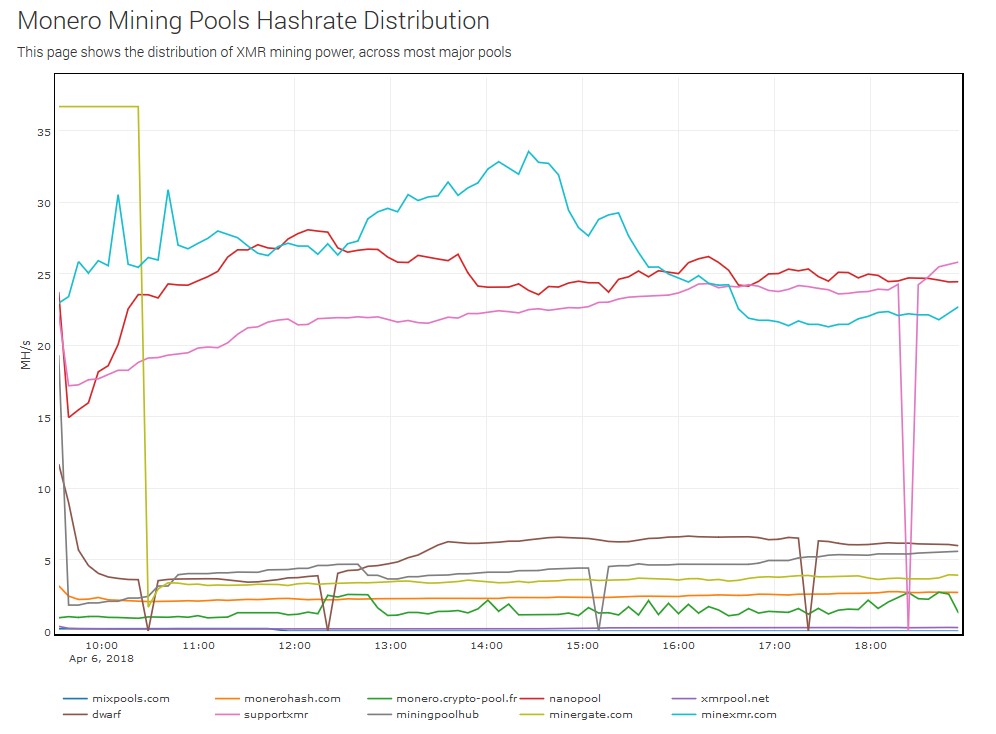 There will be more clarity over the coming days how effective the fork was to limit ASICs and their influence on the network when the mining difficulty is more accurate. As of April 6, the difficulty has not fully adjusted and a developer from Masari, Thaer Khawaja, has submitted a request to change the difficulty algorithm to make it more responsive and bring the network closer to it’s true hashrate.

Monero is not the first altcoin to change their Proof of Work (PoW) to thwart ASICs.

Vertcoin, back in 2014, changed it’s algorithm from Scrypt to Lyra2-RE to keep the network ASIC resistant.

By making a credible threat to change if ASICs are developed for the new algorithm, manufacturers are incentivized to not conduct R&D to develop these specialized mining machines.

Similarly, the PoW change that Monero has undergone has sent a message to ASIC producers. However, it is only a short-term fix, as noted by Monero lead maintainer Riccardo Spagni:

I don’t think this is an anti-Bitmain thing (although I do revel in the impact on them, given what they did with Bitcoin Cash), this is purely anti-ASIC until such time as we can switch to something like Cuckoo Cycle or SHA3 (once SHA3 ASICs are commoditised).

Issues with the Scheduled Upgrade

Users will need to upgrade to the latest CLI/GUI and miner releases before they can spend monero, otherwise they risk losing their coins on the old network. Moreover, as previously covered by BTCManager, users that claim forks of Monero, such as Monero Classic or MoneroV, will put their privacy at risk.

Some mining pools have not yet switched over and some exchanges are in the process of updating their nodes. The community has compiled a list of pools that are yet to update to ensure a smooth transition. Moreover, the recent ban of the DarkNetMarkets forum on Reddit makes it unclear whether this sub-ecosystem is prepared for the upgrade and makes it more difficult to get the word out.

The move to tweak the PoW algorithm has also led to fears of collusion between the Core Development team and an ASIC manufacturer. It is theorized that a developer (or group of developers) may be corrupted to enforce a tweak to the algorithm that is favorable to a manufacturer and to ensure their machines are not rejected by the network.

Moreover, Giacomo Zucco says that Bitmain could be developing new ASICs, and given their finances, would be first to market again, The company could begin to mine in their mining farms again, secretly. Nevertheless, the commitment to tweak the PoW every six months puts the ball in Monero’s court, as there is nothing to lose.

Giving his thoughts on the preliminary results on the fork, Monero contributor Justin Ehrenhofer said:

“The fork is still highly successful despite these chain splits in my opinion.”

To continue to old chain, Monero Classic has been announced and will not have any benefits of the upgraded chain, such as sub-addresses, multisignature functionality, or the enhanced privacy offered by the new higher mandatory ring size. The project claims that the Monero development team is ‘centralized’ and that ‘80 percent of the hashrate’ is on their side.

The Monero Classic post claims that Bitmain-affiliated mining pool, AntPool, “will support monero-classic mining service on the basis of fulfilling and maintaining a diverse ecosystem of cryptocurrency community and focus on Monero community infrastructure development.”

Because of the lower ringsize, transactions on the Monero Classic chain cannot be broadcast on the main Monero network. Because each chain will develop its own output set going forward, there is only a small risk of replay attack. Also, large-scale mining attacks are also unlikely, since most of those that will be mining Monero Classic are unable to mine Monero. There is no chance of replay attacks or a 51 percent attack, as the new software will reject blocks mined by outdated software.

It seems some exchanges are willing to support Monero Classic and given Bitmain’s deep pockets, it would not be surprising to see further support from exchanges. However, there is no ecosystem for Monero Original and no development team as of yet, something that makes many Monero enthusiasts believe it is just a ‘cash grab’ and a way to utilize their now defunct ASICs.

ASICs are All The Rage

The issues revolving around ASICs have come to the forefront of the cryptocurrency community following the revelation of Bitmain’s CryptoNight miners. In the past week, BTCManager reported that the mining giant also announced ETHhash miners, forcing the Ethereum project to confront this development.

Furthermore, it is speculated that Equihash ASICs are out in the wild, but after a community debate, Zcash founder Zooko Wilcox stated that he ‘doesn’t want to deal with this,’ suggesting ASICs for this blockchain network will not be countered and pointed out that people are free to fork the altcoin to fight ASICs while Zcash focuses on more urgent and important development issues.

Special thanks to Justin Ehrenhofer for his feedback and insights.

An earlier version stated Bitmain revealed its CryptoNight ASICs on April 3; this has been updated, the correct date is March 15, 2018.