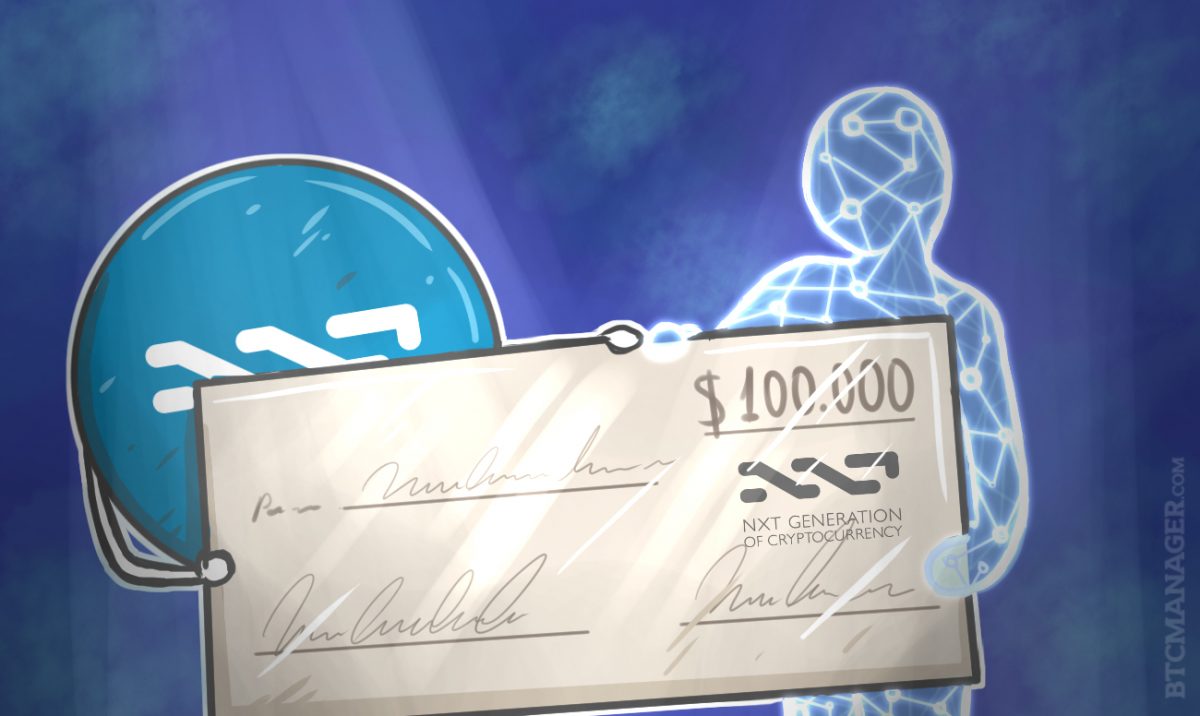 Since its inception in 2013, the Nxt Community always manifested a great commitment, and supportive engagement, for the project. Now, a leading investor within the community known as the ‘Megalodon’, referring to the fact this individual is the single largest stakeholder, is offering $150,000 worth of NXT digital tokens to anyone who runs NXT nodes.

Nxt is a peer to peer network, in which the network is made up of a large number of equally important nodes, each consisting of an individual machine running the Nxt client. The Nxt network does not build on the Bitcoin code. Instead, it uses its own code written from Java software.

The Nxt network is still relatively small when compared with Bitcoin and has the 14th largest cryptocurrency (NXT) by market capitalization. The number of nodes is important to ensure the security of the network: a limited number means the network can be compromised or attacked much more quickly than a larger network.

In essence, these nodes communicate with each other to create a decentralized super-computer where all contributors are rewarded for their efforts.

NXT was one of the first digital currencies to use a completely new block reward system, Proof of Stake. Unlike Bitcoin, Nxt doesn’t create hardware competition to increase the mining rewards. Instead, each NXT holder can potentially forge the next block. The ‘forging’ process is similar to a lottery, where only those with more than 1,000 NXT can participate in the ‘forging’ process.

A few months ago, the Nxt team announced it was developing a new Nxt 2.0 platform called Ardor. Ardor will be the next generation Blockchain-as-a-Service platform offering a complete boost for business profits, efficiency, and security. Built over the Nxt technology, Ardor was designed with unlimited scalability, safe, smart contracts, and customizable child chains.

Nxt’s Ardor blockchain platform is planned to go live on a Testnet system in the last quarter of 2016, with a production system expected to launch in the first or second quarter of 2017. However, Nxt has always suffered from a lack of marketing.

And though Nxt still maintains grass-roots support and its adoption is increasing steadily, the network needed support to carry out its mission. That’s where Megalodon comes in; this active member of the community started a bounty program where he is offering $150,000 to anyone running a node.

Megalodon is the nickname of this anonymous investor in the Nxt community and his or her motivation appears to be aligned with the long-term success of Nxt.

“This bounty is an excellent endorsement of the Nxt financial platform from the people who use it. We hope it will also encourage more people to sign up and see for themselves the benefits second generation Blockchain technology can bring to businesses and transactions in general.”

While Nxt is a very secure system, the latest bounty could spark the growth of the network needed to realize its potential. Dave Pearce, Nxt Board member reckons,

“Nxt is very undervalued right now. And, it is possibly the most technically advanced and certainly the most mature blockchain platform.”

No registration required to participate in the bounty; to qualify, users simply need to download the NXT client and run the node. By running the node, the participant is helping to create dedicated systems to run Nxt, contributing to the overall network as well.

Participants running Nodes will, under this bounty program, receive extra rewards for supporting the Nxt network. The average amount of NXT any participant holds from the 14th of July to the 12th of October will determine how many Ardor tokens they will get, with a one-to-one ratio.

By investing in expanding the network and generating interest in Nxt, the Megalodon could be making a smart long-term investment by increasing the long-term perceived value of NXT, which currently stands around $0.02.