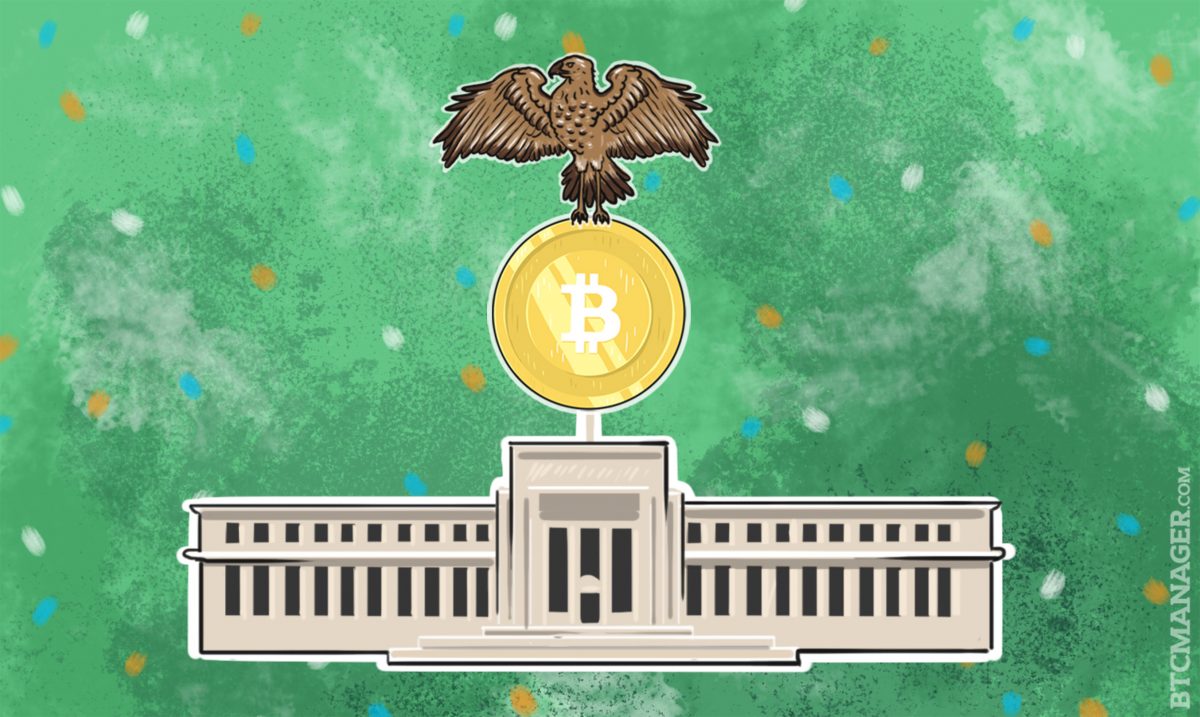 Yesterday’s Fed statement was noticeably positive, more so than previous statements, on the assessment of the US economy and this may act as a drag on BTC-USD. The statement highlighted

“strong job growth in June” and “some increase in labour utilization in recent months”.

The statement also highlights that while household spending has grown strongly, business investment has remained weak.

Moreover, for the first time this year, the Federal Reserve seemed optimistic about the risk assessment of the US economy over the short-term,

“Near term risks to the economic outlook have diminished.”

This is a stark contrast to just four months ago regarding the international economy when the central bank warned that “developments overseas pose risks”.

While the Federal Open Market Committee decided to maintain interest rates within the 0.25-0.5 percent range, one of the members dissented. Esther L. George voted to raise the base rate to the 0.5-0.75 percent range. Taken together, these factors point to a possible rate hike in the US when the Fed next meets in September.

Higher interest rates will raise demand for the US Dollar and consequently lead to an appreciation relative to other assets. Therefore, if economic data continues to show a positive outlook for the US economy, the chances of a rate hike will increase and this will weigh on BTC-USD.

The sheer size of this monetary injection into the economy will mean that this measure will likely be spread out over a period of time. The stimulus is hoped to weigh down on the Japanese Yen which has surged recently as investors seek safe-haven in currencies such as the Yen and Swiss Franc. An increase in the money supply and debt held by the Bank of Japan should have the effect of weakening the Yen significantly.

The Bank of Japan meets this week and it is expected that interest rates will be cut further into negative territory to ward off an appreciation in the Yen and provide help for Japan’s exporters who are negatively affected by a strong domestic currency. Friday (00:00 GMT) will most likely see the Bank of Japan cut the base interest rate from -0.1 percent to -0.2 percent and a statement will be due to follow shortly afterward.

The chart below shows the effect of Japan’s negative interest rate policy on XBT-JPY. Bitcoin managed to smash through psychological resistances at 5000 and 6000 following the implementation of negative interest rates. Given that the Bank of Japan slashes rates further on Friday, we could see a continuation of this long-term bullish trend and see XBT-JPY push toward 8000 again. 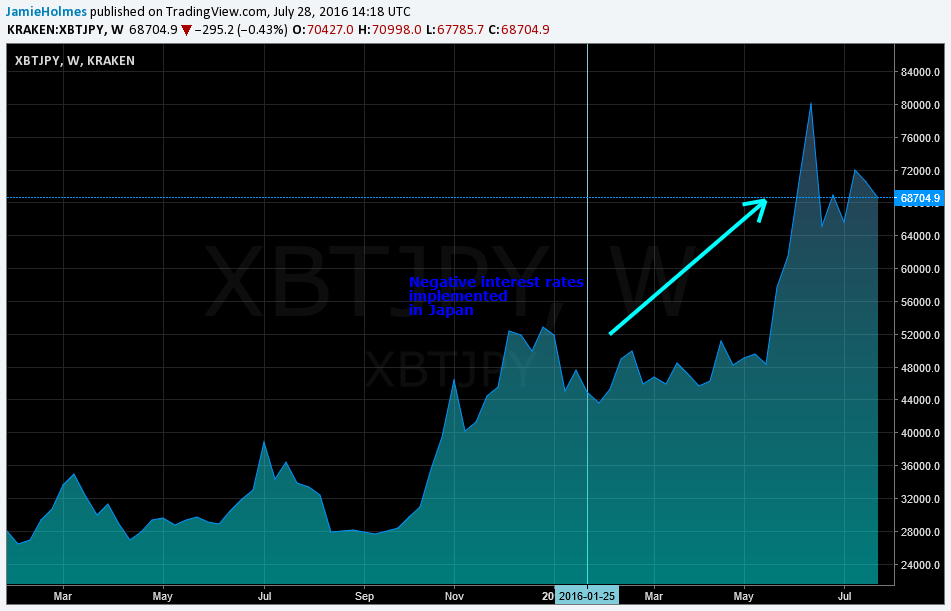 Furthermore, Friday (12:30 GMT) will also see the latest economic growth figures for the US which will hold a lot of influence over the Federal Reserve’s next interest rate decision in September. Better than expected growth will invigorate the case for a rate hike and see broad US Dollar strength in the markets. The Gross Domestic Product for the second quarter is anticipated to come in at 2.6% versus 1.1% in the first quarter and a higher reading will increase the expectations for a raise in interest rates.

The chart below shows how BTC-USD tanked below $400 and remained below this level for the most part of a month immediately after the Federal Reserve started to normalise policy and raised the base interest rate by 25 basis points. A similar situation could unfold if the Fed decides to raise rates in September. 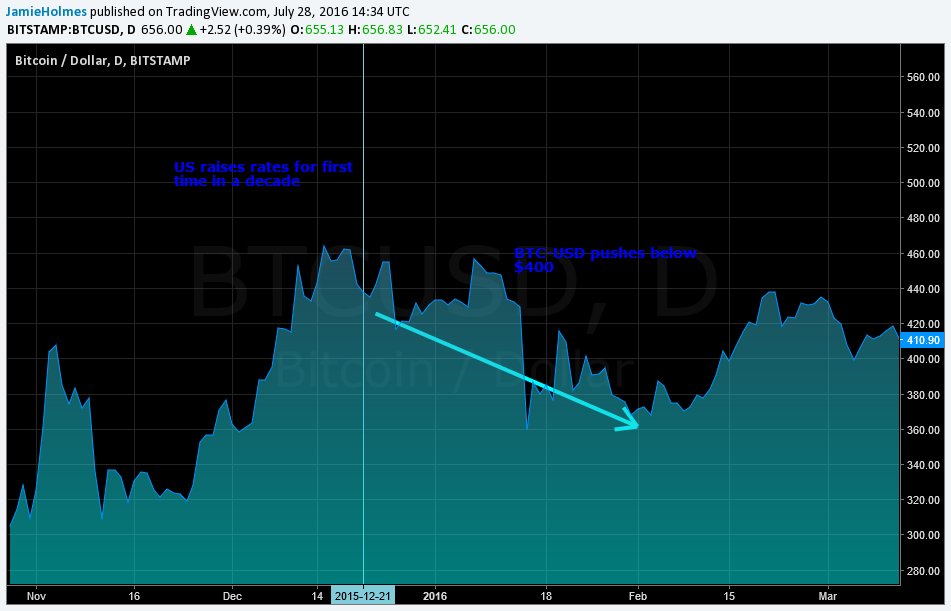 As a result, we could see a divergence in the trends of BTC-USD and XBT-JPY. While in Yen terms Bitcoin is expected to rise over the long-term, in Dollar terms we could see Bitcoin falter as the Federal Reserve normalizes monetary policy and the US economy strengthens.

After misleading markets for quite some time, the Fed is wary of the credibility problem it faces; they will have to raise rates in less than perfect conditions and this latest statement opens the door for at least one rate hike this year.

Holding other factors constant, this is a negative fundamental theme for BTC-USD as the US Dollar will appreciate significantly if incoming data continues to paint a positive picture and the market gets ready for another rate hike.