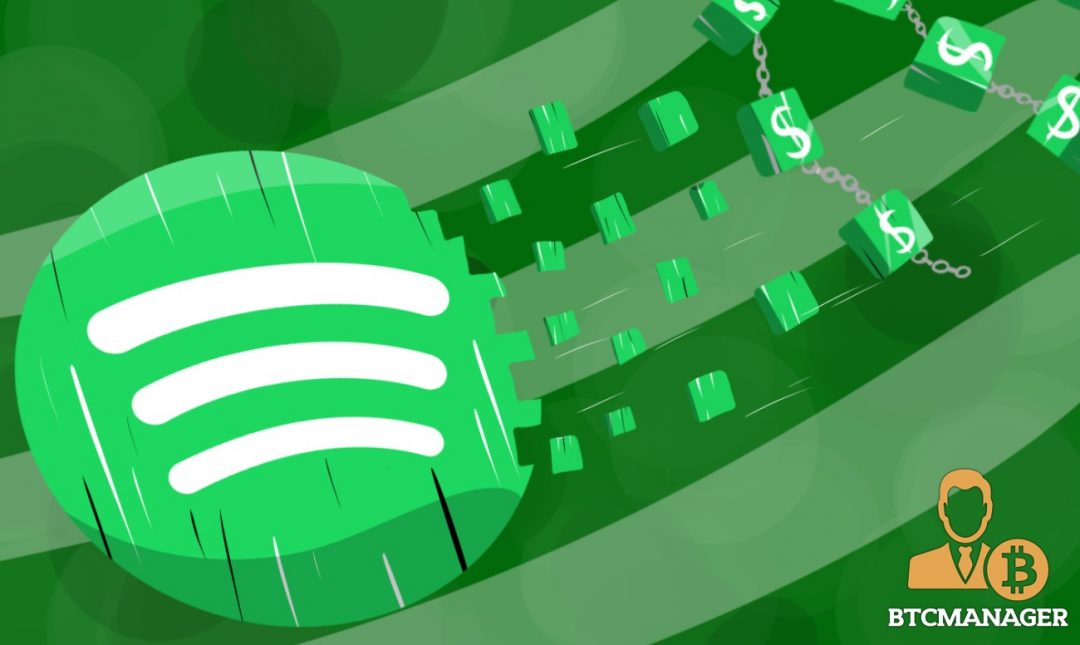 Digital music streaming service Spotify has acquired blockchain company Mediachain with a view to solving the problems associated with royalties attribution on its platform. New York-based Mediachain has been developing blockchain solutions to address the challenges faced by musicians and the creative industry when it comes to content attribution and revenue distribution.

Blockchain technology is what allows Bitcoin to operate without a central body to provide trust and to verify transactions. The blockchain allows for transactions to be recorded, verified and stored by all participants of the peer-to-peer network. The data processed on the blockchain is immutable, and any attempts to change the data is immediately recognized and resolved. It is what makes the blockchain an excellent tool for capturing and storing data of all forms in a secure and trustworthy manner, especially in today’s creative industry where content can easily be attributed to the wrong sources resulting in loss of revenue for the original content creators.

One of Mediachain’s co-founders, Jesse Walden, has extensive knowledge and understanding of the challenges that the music industry faces with regards to attribution due to his background in music management. Prior to his work at Brooklyn-based Mediachain Labs, he co-founded a music management firm Cool Managers where he worked with renowned artists such as Solange Knowles and Blood Orange. It was while running Cool Managers that Walden was first exposed to the many problems related to music data, such as determining the creators, owners, and other stakeholders to musical content.

In addition to the difficulties of crediting the right people, financially and otherwise, the music industry also has a massive problem with actually digging out the information as pertaining to music. “This is because that information doesn’t have a globally referenceable home. Instead, it is trapped in proprietary databases, spreadsheets, email inboxes, and long-form contracts maintained by separate organizations,” says Holden.

“This affects the entire music supply chain, and most critically, digital service providers (DSPs) who are trying to pay artists and rights owners.”

To solve these issues, Mediachain Labs is developing Mediachain, a decentralized, peer-to-peer data network that shares this data across different organizations and applications.

It is not the first time something like this has been attempted. In 2011, the “Global Repertoire Database” initiative was created. The initiative was hailed as an important step for the music industry and garnered millions in investments. Though it seemed primed for success, the project failed in 2014 because none of the stakeholders wanted to allow an external party access and control over their data. However, since blockchain technology allows for the database to be decentralized and it can only be accessed be relevant stakeholders, this problem has been addressed.

Another reason Mediachain is a solution that could work better is that it addresses the fact that different organizations and applications use different languages and formats to record data. This makes it difficult to have a central body since all the languages and formats would have to be translated into a new one. Since this has traditionally been an issue for endeavors of this kind, Mediachain solves this by using, “a modular and lightweight translation system that would enable interested parties to communicate, while preserving their proprietary data formats. The network becomes incrementally compatible over time, without requiring agreement about a mandatory new standard” according to its blog.

Every entry made into the database has a crypto-signature meaning all the data is correctly attributed to the owner, or as is common in the music industry, owners. Mediachain ensures that the important metadata related to a song is safely stored yet easily accessible.

Swedish music giant Spotify has acquired Mediachain Labs to “help further Spotify’s journey towards a more fair, transparent and rewarding music industry for creators and rights owners,” according to a press release. Mediachain will now be integrated into and work out of the streaming giants’ New York office.

This move comes after Spotify recently had to pay around $30 million as a settlement to the National Music Publishers Association (NMPA) over unpaid royalties. Spotify, however, insists it held on the royalties because it simply did not know who to pay. Spotify explained:

“This is a global problem – outside the U.S., publishing rights organizations and collecting societies who receive royalties on behalf of songwriters and publishers face similar challenges. And it is a complex problem – we are committed to solving it, but it is going to take significant time and effort.”

Also, Spotify is facing many legal suits against it over unpaid royalties which stem from the issue of wrong, unknown or incomplete music metadata. “We want to fix the global problem of bad publishing data once and for all,” Spotify added. This is where Mediachain and its technology comes into play.

Spotify’s acquisition of Mediachain signals its ongoing efforts and commitment to ensure that it plays fair and is perceived as a better platform to stream artists’ work. Major artists like Taylor Swift have spoken out against the streaming service.

Mediachain is the third acquisition Spotify has made in 2017 having bought Sonalytic and MightyTv. These actions are seen as preparations for Spotify’s scheduled 2018 IPO and also as an attempt to better its standing with music labels, artists, and the music industry as a whole.

The use of the blockchain to solve attribution problems in the music industry is an exciting development, especially seeing as Spotify recently passed over 50 million paid subscribers. The right application of blockchain and smart contract technology can ensure that revenue is distributed fairly to all the stakeholders involved and, thereby, creating a better environment for budding artists to be adequately rewarded for their craft.