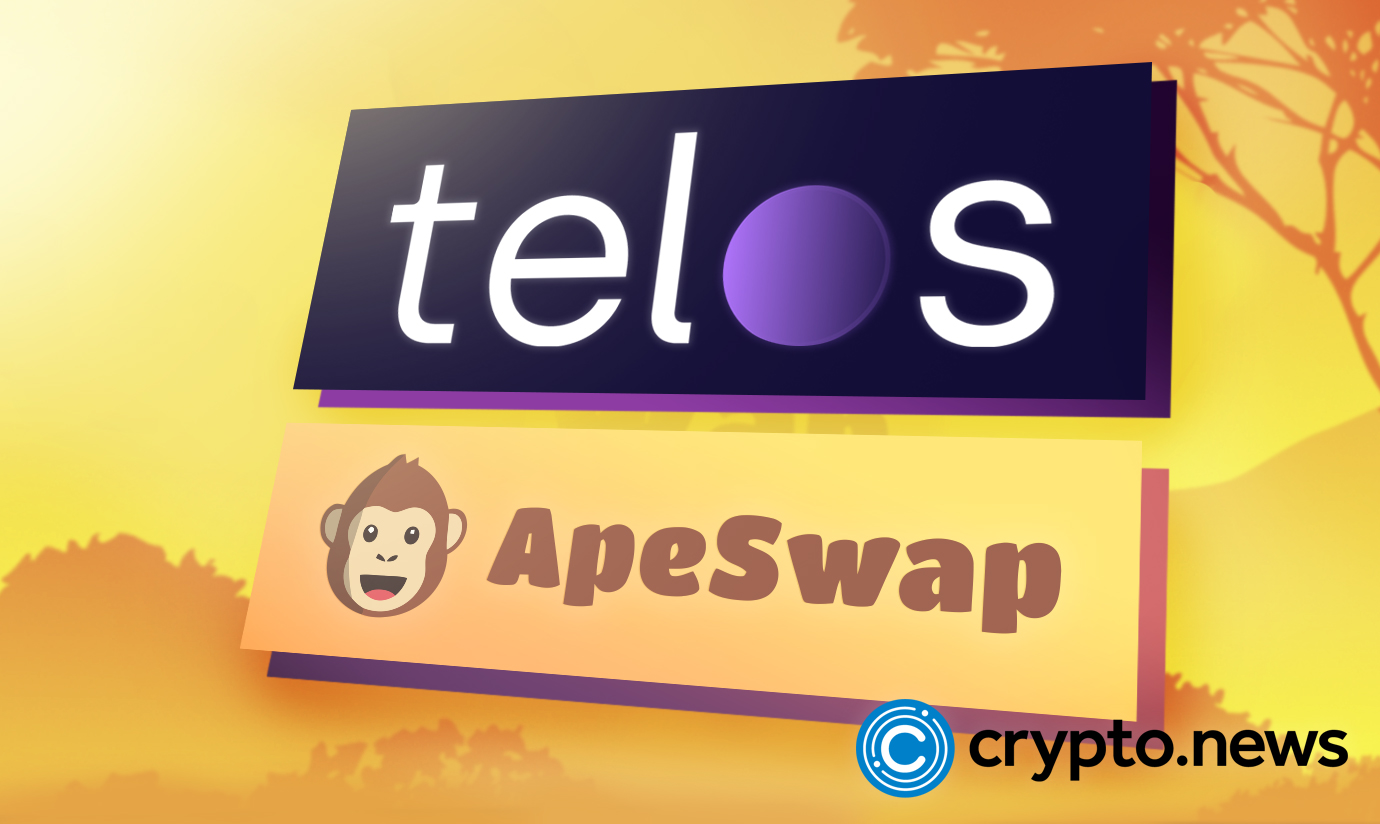 Telos has signed an extended partnership deal with ApeSwap, to onboard the decentralized finance (DeFi) protocol and offer users access to high-yield farming products. The move is part of the Telos Fuel Incentive initiative.

Telos, a blockchain network that claims to be the most powerful and scalable Ethereum Virtual Machine (EVM) compatible platform, has announced the signing of an extended partnership deal with ApeSwap, an automated market maker (AMM) on the BNB Chain.

Per a statement shared with crypto.news, the Telos-ApeSwap partnership is part of the former’s Fuel Incentive Strategy, which aims to explore the decentralized finance (DeFi) space and incentivize credible projects to take advantage of its highly scalable network.

As part of the new alliance, the ApeSwap AMM will go live on the Telos blockchain network and offer members of both ecosystems access to high-yield farming and DeFi investment instruments.

The partnership is a win-win scenario for all parties, as ApeSwap will introduce innovative features and products to the Telos ecosystem while taking advantage of Telos’ near-instant finality and zero front-running. Users will also enjoy juicy reward incentives.

Importantly, the team has made it clear that the latest partnership deal will enable Telos users to leverage the extensive liquidity available on the ApeSwap DEX across six major Telos ecosystem tokens, including BANANA, ETH, BTC, USDT, USDC, and TLOS.

That’s not all, users will also be able to take advantage of the multichain support of the network to bridge their BANANA tokens to Telos, stake LPs to earn TLOS, vest TLOS at a discount by selling their LPs, and more. Julian from ApeSwap said:

“Expanding to Telos will help ApeSwap further bridge the gap between Web2 and Web3. Through the incredibly fast transaction speeds and low fees available on Telos, we look forward to onboarding the next wave of new DeFi users on ApeSwap Telos.”

To make it easier for users to pay for their initial transactions, Telos will airdrop 1 $TLOS token to all GNANA holders who hold a minimum of 1 GNANA token in their wallet, as well as those who stake GNANA. A snapshot for the distribution of the token to eligible participants will be taken at exactly 20:00 UTC on October 20, 2022.

Furthermore, there will be a joint revenue-sharing exercise between ApeSwap and Telos for the first twelve months of their partnership. Both projects will split 50 percent of all post-buybacks and burn DEX revenue.

The team says the 0.2 percent transaction fee on all Telos transactions on the ApeSwap DEX will be used to fuel ecosystem growth initiatives including token buybacks and burns (075 percent). Users who provide liquidity to Telos liquidity pools on ApeSwap will also earn a 0.05 LP provider fee on every transaction.

“Many companies in Web3 want to innovate, but few actually do. ApeSwap is one of these few. They are not just a platform but a partner that truly thinks outside the box to offer users innovative solutions. Working with them on their Jungle Bills initiative was a seamless experience and we are excited to be on this journey with them.”

ApeSwap is one of the most used dApps on the BNB Chain, with over $145 million in total value locked (TVL).