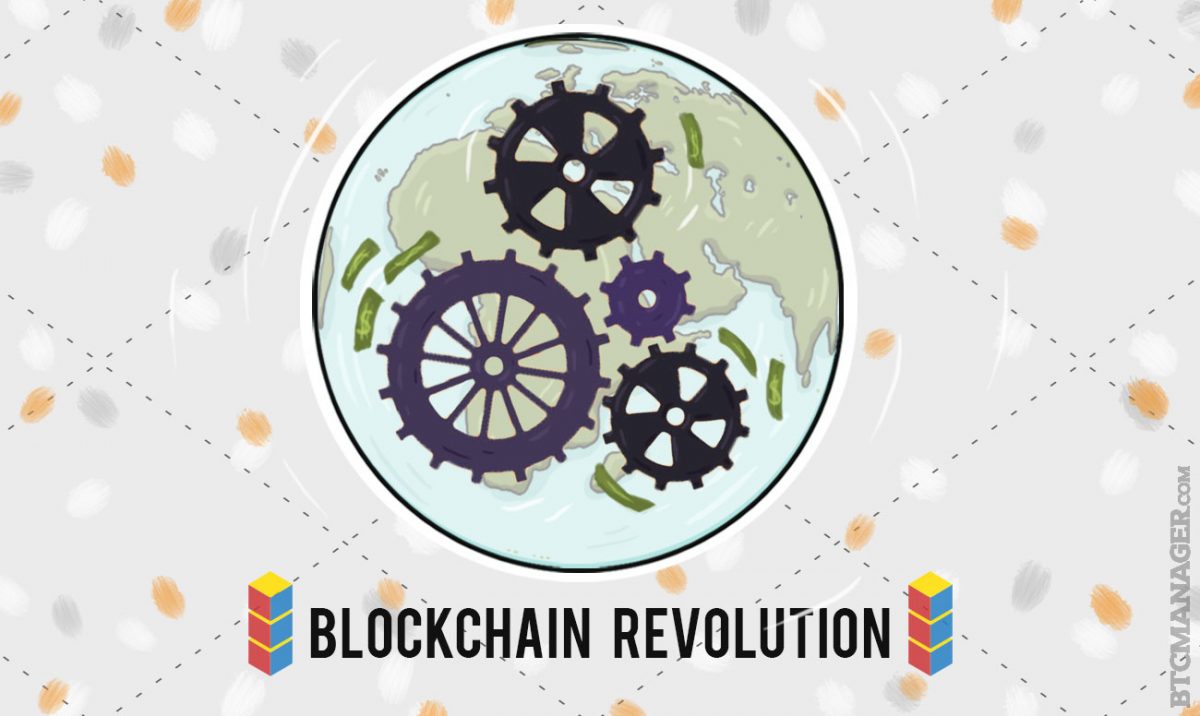 Alex Tapscott and his father Don relish their collaborative work in examining transformative changes impacting the world. Today (May 10th) marks the release of their much-anticipated book Blockchain Revolution: How the Technology Behind Bitcoin is Changing Money, Business, and the World — among the first to take a deep dive into the world of blockchain technology. This 368-page read examines the emergence of blockchain technology as a truly open, global platform with distributive qualities and analyzes its promise to transform our thinking around the future of the online world.

Don Tapscott’s reputation as one of the world’s pre-eminent thought leaders has been well documented. In 2006, he authored the seminal bestselling book Wikinomics: How Mass Collaboration Changes Everything which provided a rich look at the Internet and its distinction as the first global ecosystem for mass collaboration. In November 2013, he was recognized by Thinkers50 named as the 4th most important business global thinker. And in a June 2013 Forbes.com social media analysis, he was christened the most influential management thinker in the world. He was made a Member of the Order of Canada in 2015, one of that country’s highest civilian honors, which recognizes outstanding achievement, dedication to the community and service to the nation.

Now, in this collaborative effort with his son Alex, the two take aim at the seismic shift taking place through the use of blockchain technology in transforming the world of business and global societies. Alex is the founder and CEO of Northwest Passage Ventures, an advisory firm on the leading edge of the blockchain movement. A Certified Financial Analyst, Alex was formerly a senior executive with Canaccord Genuity, Canada’s largest independent investment bank. He is a faculty member with the Global Solutions Network Program of the Martin Prosperity Institute tied to the Rotman School of Management at the University of Toronto.

In this exclusive interview with BTCMANAGER, co-author Alex Tapscott talks about the Blockchain Revolution movement and how its influence is rapidly being ushered into our worldview.

Bitcoin – and, by association, blockchain technology – first popped up on my radar screen in 2012. At the time, I was working in investment banking, with a focus on financing and advising emerging technology companies. What started for me as a bitcoin hobby quickly became a blockchain obsession. In fact, the more deeply I immersed myself in it, the more convinced I became of the technology’s massive impact on the future of the world economy.

On the impetus behind writing Blockchain Revolution

All this ensued in February 2014 while on a ski trip in Quebec. At the time, he was running a program at the University of Toronto, investigating new multi-stakeholder networks that were using the Internet to solve big global problems; what he called Global Solution Networks. So one night on the trip, we found ourselves eating dinner at an old-fashioned steakhouse, having a wide-ranging conversation about a number of big ideas. Somewhere between the first and second bottle of red wine, Bitcoin, and the blockchain came up. Later I was recruited to write a paper on the subject, which eventually led to the report  I wrote, “A Bitcoin Governance Network,” that advocated for the multi-stakeholder leadership of the protocol. Shortly thereafter my dad’s publisher, Penguin Random House, read the report and asked  if he and I could write a book on the subject. We put together a proposal, they loved it and signed us to a book deal.

You know, we have now spent two years researching this technology and have concluded, unequivocally, that blockchain technology is the second generation of the digital revolution. The first generation brought us the Internet of Information. The second generation, powered by blockchain, is bringing us the Internet of Value – a new, distributed platform that can help us reshape the world of business and transform the old order of human affairs for the better.

But like the internet in the late 80s/early 90s, this is still early days. The best comparison is to say we are currently in the year “1993” of blockchain.

The technology is still being developed, strengthened and scaled. Many of the killer apps are in development and will be released in the next 1-5 years, tracking the progress of the internet in the 1990s. And venture investment has exploded over the past two years, similar to how it did in 1993-1995.

Where do you see the ongoing emergence of bitcoin and cryptocurrencies fitting into this Blockchain Revolution?

Cryptocurrencies like bitcoin are hugely important to the future of blockchain. There is a view, prevalent in the financial services industry, that goes something like, “Bitcoin bad, blockchain good.” I think that’s wrong. Sure, there are some use cases where you can have blockchain technology without the crypto-token, but generally speaking having a monetary incentive like bitcoin or ether (in the case of Ethereum) significantly improves the security, scalability and transparency of the network.

In the book, you talk a lot about emerging blockchain applications. In your opinion, which one will move to the front of the pack?

Ethereum, itself a blockchain but also a decentralized platform that can run smart contracts, might prove to be the most important innovation of the blockchain revolution. It is at a very early stage and not without some major implementation challenges, but the potential is enormous. Whereas bitcoin is purposefully built for moving and storing value – itself a paradigm-shifting technology – Ethereum is so-called “Turing Complete.” It can run rich, complex applications on top of the platform. The next 12-18 months will see huge implementations of this technology – from our energy grid to ride-sharing services and music platforms – that could shake the windows and rattle the walls of a dozen of industries.

Given that rapid pace of blockchain innovation, how can we ensure that the user experience element is appropriately addressed?

Well, without an easy-to- use user experience and user interface, many of the most exciting consumer applications of this technology will not succeed. So really, it’s up to the entrepreneurs building these game-changing applications to stay ahead of the market and make beautiful products. Right now, many applications still require a working knowledge of cryptocurrencies, which is fine for some, but for the mass market, they have to be simpler.

The flow of blockchain investment money is a topic you touch upon in the book. What sort of trends are you seeing here?

In the early days, the vast majority of growth capital came from a small clique of bitcoin-evangelists. Sometime in 2012 and 2013, that shifted. Now venture capital firms like Andreessen Horowitz, Union Square Ventures and others started funneling money into bitcoin companies too. But most of those early investments were focused on bitcoin as a speculative asset and a payment protocol, not blockchain as a computing platform. Today, with entrepreneurs leveraging bitcoin and Ethereum, and also private blockchain networks to solve big problems well beyond payments, we’re seeing enormous institutional interest as well.

But when exactly did this institutional interest begin to take hold?

2015 was the year blockchain captured the imaginations of corporate leaders everywhere. It was an institutional coming out party of sorts. Since then the pace of change has been insane. Honestly, when I started my research in 2014, no big bank had publicly announced an interest (let alone investment) in the blockchain. By December 2015, virtually every single financial services firm was committing enormous resources (including capital) to understand and implement this technology. That is really a remarkable transformation.

Amid this forward push, are there any cautionary tales that the blockchain community should be paying attention to?

I think there are ample reasons to be rationally exuberant about blockchain. But I also worry there’s a bit too much “blockchain evangelism” out there. I don’t think that’s helpful. Blockchain is not a panacea for the world’s problems. Technology does not create prosperity, people do.

In our book Blockchain Revolution, we identify 10 big challenges that we must all overcome to lead this revolution in a positive way. Among these: How do we scale this technology? How do we prevent governments from stifling it, twisting it or trying to shut it down? How do we prevent criminals from using and abusing it? How do we ensure that the blockchain is a tool for prosperity and job creation? These questions must be addressed and they can’t be addressed by code alone. We need people who are willing to step up and lead.

The book talks at length about how potential blockchain solutions for the social and economic advancement of our global citizens? Can you explore this a bit?

Sure.  I think there is an opportunity to harness blockchain to address many pressing issues. Today we are caught in the grip of a troubling prosperity paradox. The economy is growing but fewer people are benefiting. Youth unemployment is stubbornly high, median incomes are slipping and new business formation is hitting multi-decade lows in the developed world. The rise of the Internet has done little to alleviate the bureaucratic bloat and inefficiencies globally, stranding trillions of dollars of dead money in the dark economy. With blockchain technology, a world of possibilities opens up to begin to address these trends.

What exactly does the world of blockchain technology bring to the table here?

One of its biggest values is as a true peer-to-peer platform that enables personal economic empowerment.  It will allow us a measure of control over our identities and our personal data.  We’ll have the capability of facilitating transactions that creating and exchange value without powerful intermediaries acting as the arbiters of money and information.

We can protect our privacy and monetize our own information. And we can ensure creators are compensated for their intellectual property. In short, rather than trying to solve the problem of growing social inequality through redistribution alone, we can change the way wealth – and opportunity – is pre-distributed in the first place, as people everywhere, from farmers to musicians can share more fully in the wealth they create.

What’s your prognosis for the long-term future of blockchain?

Well, for one, I don’t think the future is something to be predicted, it’s something to be achieved, so I’ll leave the predictions to the ‘futurists’ out there. But I will say I think we are at the end of the first inning in Game 1 of the Blockchain World Series. The next 5, 10, 20 years and beyond will see blockchain technology fundamentally transform many of our institutions, from the corporation to government, and everything in between. People tend to overestimate the effect technology will have in the short term but drastically underestimate it in the long-term. My hope is in 10 years, we will look back on the first generation of the blockchain revolution as the period where we harnessed a powerful technology to secure a fair, thriving and prosperous future for all.