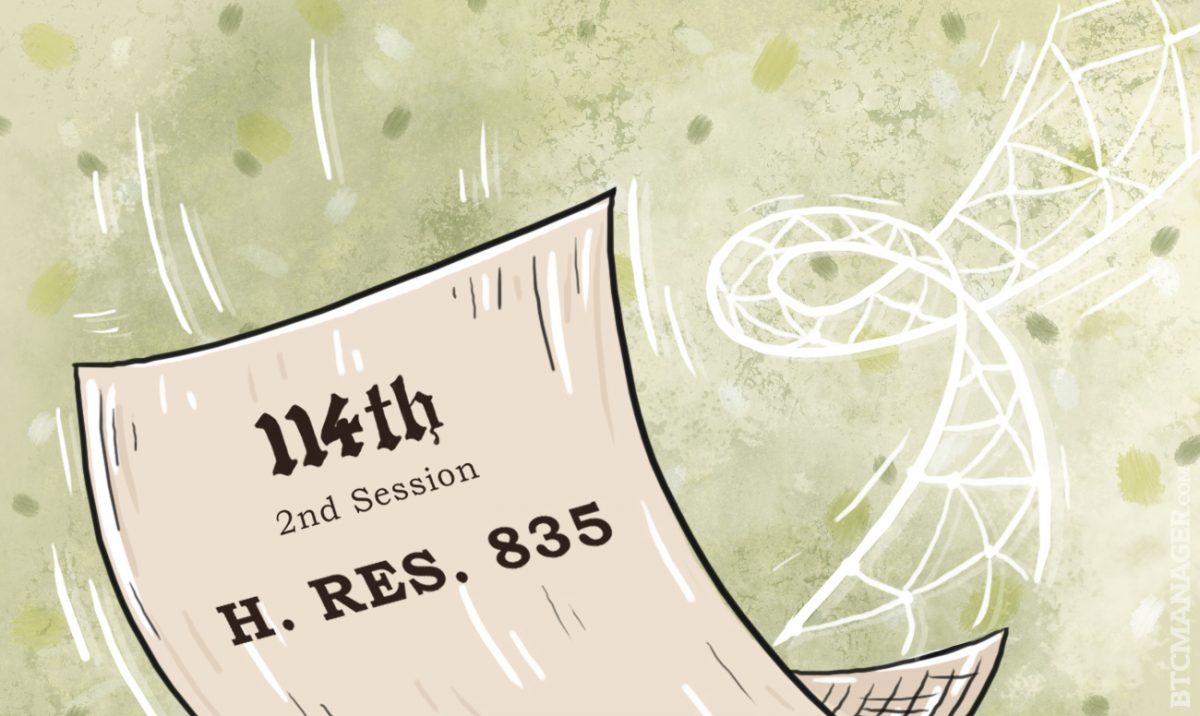 During the second session of the 114th Congress, Representative Adam Kinzinger introduced the bipartisan House Resolution 835 (H.R. 835) which proposed the establishment of a national policy that will increase the availability of financial tools and technologies.

The resolution, which was referred to the Committee on Energy and Commerce, described the importance of transparency, security, and authentication of technologies such as Bitcoin and blockchain technology in the economy of the United States, and the impact of a legitimate policy on emerging technologies.

The opening section of the H.R 835 notes five major statistics to emphasize the significance of alternative technologies in various industries of the country: financial opportunities, growth of the mobile industry, rapid development of blockchain technologies, cases of identity theft and transparency of non-fiat currencies.

The resolution acknowledges this new era of emerging financial technologies, methods, and strategies:

“Whereas technology solutions have the potential to improve consumers’ ability to control their economic well-being, to encourage their financial literacy, and improve their knowledge base and increase their options to manage their finances and engage in commerce;  Whereas new payment methods and new payment strategies reflect new commercial opportunities. ”

Considering the financial benefits of consumers, the resolution proposes that the United States develop a “national policy to encourage the development of tools for consumers to learn and protect their assets.”

Kinzinger’s resolution also notes the exponential growth of the mobile market and the increasing number of mobile devices and deployment of broadband access in the country. According to the Federal Reserve’s “Consumers and Mobile Financial Services Report,” the percentage of mobile banking users have almost doubled since 2012.

The statistics provided by the Federal Reserve disregards the number of mobile users that rely on alternative payment networks such as bitcoin and other mainstream financial services including Skrill. Thus, the surging growth of the mobile market could potentially be one of the major factors that encourages mainstream adoption of emerging financial technologies.

Identity Theft and Development of the Blockchain Technology

One commonly known fact is that governments and their agencies have a poor track record when it comes to storing data.

According to a report released by the Identity Theft Resource Center (ITRC) in January of 2016, the number of U.S. data breaches tracked in 2015 totaled 781, with each breach bringing huge disorder to their respective industries.

One of the more notable data breaches in 2015 was the breach of health care giant Anthem’s IT system, which resulted in the loss of 80 million patient and employee records. The theft of identities from this single breach, out of the 781, led to significant loss for both the victims and the organization.

In 2015, one of the world’s most respected cybersecurity firm Symantec Corp released a study which suggested that 47 percent of data breaches are caused by malicious or criminal attacks, which as expected, led to the conclusion that storing information in one centralized server or database is of high risk.

H.R. 835 suggests that the United States government needs to understand the technical advancement in various security-focused technologies, and to appreciate the transparency and security they can offer to important industries.

One of the technologies mentioned in the resolution is the blockchain technology, which is being widely implemented by financial institutions and banks. Recent trends in the blockchain market indicate that blockchain startups are gearing toward other large industries, such as real estate, automobile, insurance, healthcare, and telecommunications, which are described by the resolution.

If passed, the House of Representatives can direct the federal government to establish a national policy to encourage the development of emerging financial technologies such as the blockchain technology which has proven its potential beyond the financial market.