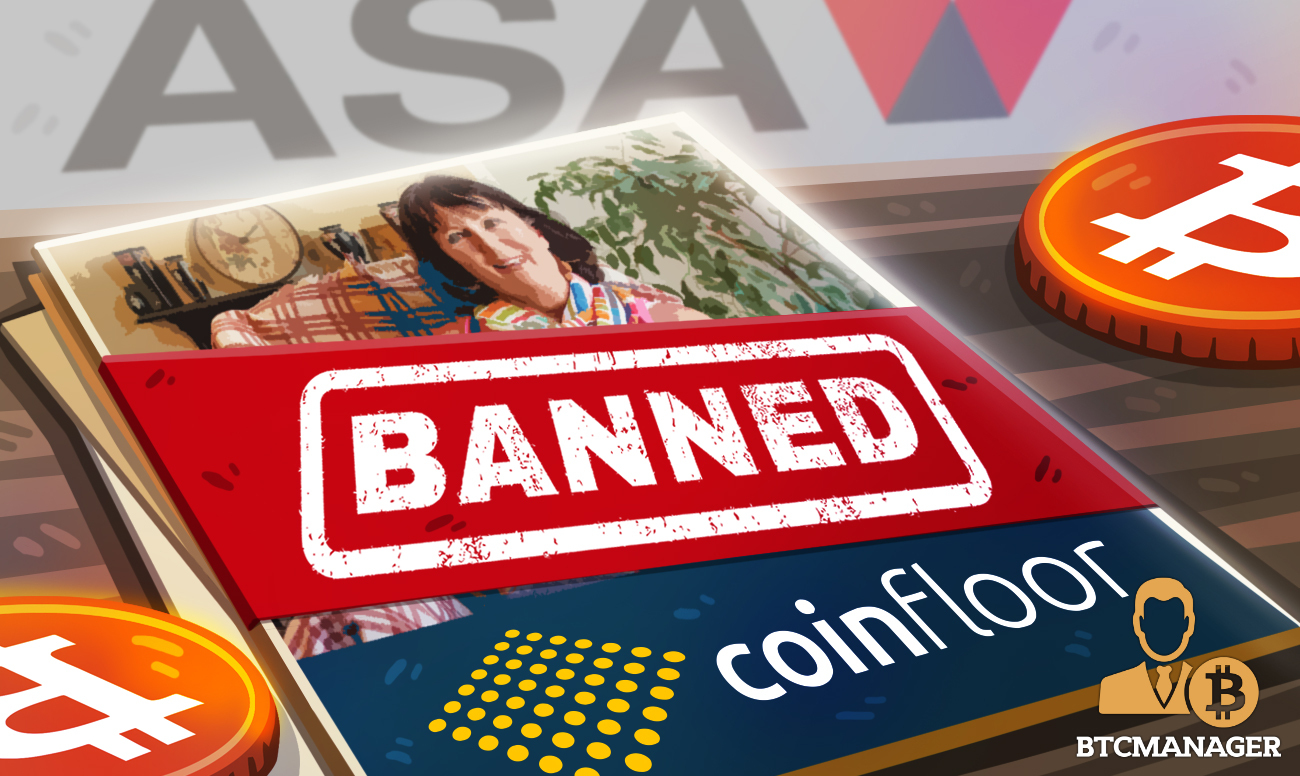 The Advertising Standards Authority (ASA), a self-regulatory advertising watchdog in the UK, has banned a bitcoin ad by cryptocurrency exchange, Coinfloor, for misleading a particular target audience.

According to an announcement on Wednesday (Mar. 17, 2021), the ASA upheld a complaint brought to the regulator against a bitcoin advert by Coinfloor. The watchdog noted that the ad violated rules of the UK Code of Non-broadcast Advertising, Sales Promotion, and Direct Marketing (CAP Code).

Coinfloor’s bitcoin ad which appeared in Northamptonshire Telegraph, a local newspaper, back in December 2020, featured a 63-year old woman giving a testimonial about her investment in bitcoin. According to the woman, more people were becoming aware of bitcoin’s saving power.

Part of the retiree’s testimonial reads:

“Today there is no point keeping it in the bank – the interest rates are insulting […] That is why when I received my pension, I put a third of it into gold, a third of it into silver and the remainder into Bitcoin… To me, Bitcoin is digital gold and it has allowed me to take the steps to secure the cash I already have…”

However, the ASA received a complaint regarding the bitcoin ad, which was believed to target retirees. Part of the issue was that the bitcoin ad was misleading as it did not clearly state the risks associated with investing in bitcoin. Also, the ad was “socially irresponsible”, because it implied that buying bitcoin was a “secure way to invest one’s savings or pension.”

Meanwhile, Coinfloor’s response to the complaint stated that the bitcoin ad reflected the woman’s experience and not the views of the crypto exchange. Coinfloor further said the customer did not recommend people to make bitcoin investments, nor did the ad promote the flagship crypto’s price performance.

Instead, the customer merely revealed her BTC investment and gave reasons why she purchased the crypto asset. Also, the cryptocurrency exchange noted that they had put a disclaimer warning about the risks involving crypto.

Coinfloor Not Regulated in the UK

Despite Coinfloor’s response, the ASA criticised the disclaimer in the bitcoin ad. According to the watchdog, the small font used and the positioning were not enough to clearly inform customers about the risks associated with bitcoin investment. Meanwhile, Coinfloor stated that the disclaimers font size and positioning were similar to how it appeared in other ads.

Also, ASA said the bitcoin ad targeted pensioners who did not have extensive knowledge about bitcoin and crypto. Furthermore, both the bitcoin market  and Coinfloor were unregulated in the UK, meaning that consumers who had issues could not employ the services of some institutions.

Consequently, the advertising regulator banned the bitcoin ad and instructed the crypto exchange to clearly state the risks of bitcoin investments in its future campaigns. Northamptonshire Telegraph also said that it wouldn’t push the ad again unless Coinfloor made the necessary changes.