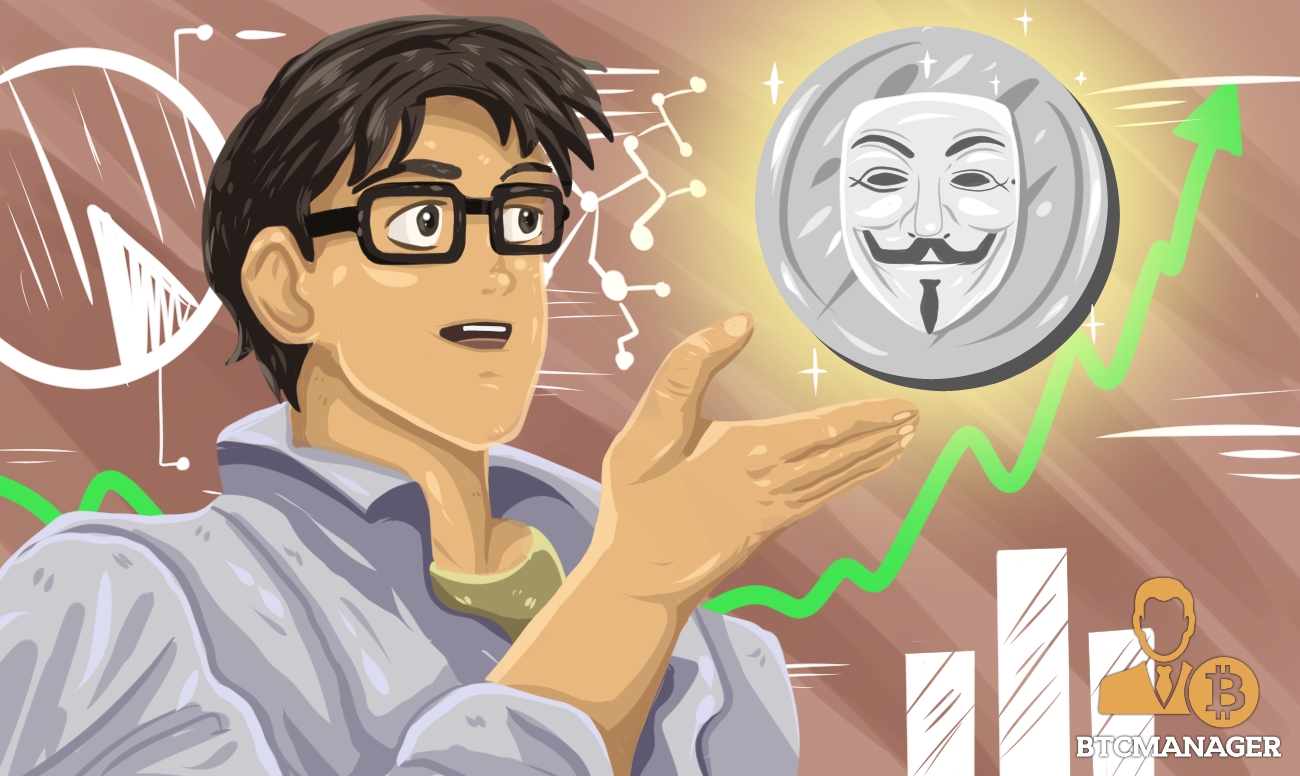 Memes have steadily found their way from 4chan boards and reddit subs into the mainstream culture. Nobody expected a picture with text on it to be the preferred means of breaking the ice or communicating with someone else on the other side of the world.

On closer inspection, it’s not hard to figure out what factors make memes stand out and led to their sudden rise in the pop culture in such a short period. Memes transcend language and culture and have a universal appeal. A meme shared by someone in Australia will have the same meaning to an Indian or a German.

Memes are also a considerably convenient way of communication. Is it your friend’s birthday? Your parents 25th anniversary? Perhaps it’s Christmas, and you want to wish all your friends with a short, quirky, and snappy message. No problem, send them a trending meme, and you’re set.

Rise of the Meme Economy

Reddit sub /r/memeEconomy gives its spin to memes. As the sub name might suggest, the community amalgamates memes and economics in perfect proportion. The subreddit portrays memes as a potential investment, where the participants can “invest” in them based on their potential to become a top meme on the website. The incentive? Higher the meme charts on the subreddit, higher the number of meme coins the user earns. Wait, meme coins? Yes. Believe it or not, that’s the official currency of the subreddit.

So what’s the catch? Can one print money just making dank memes? Well, not really. You can earn as many meme coins as you wish, but that’s all there is to it. The subreddit is a satirical take on the way real-world stock markets function, although some of the new members of the community might accuse the meme community of taking itself way too seriously. This is evident by the fact that the subreddit’s automatic-bot has its GitHub page.

However, the modus operandi of the subreddit is rather quite straightforward. If one identifies a relatively new meme with a few upvotes, they could invest their meme coins in the meme and hope for it to burst through the roof to yield maximum returns.  This expectation also coincides with the psychological satisfaction one derives from a meme while it’s relatively fresh on the internet. As soon as it goes viral, it becomes a dead meme and the person sharing it might bear the risk of sliding down the social ladder of memes. 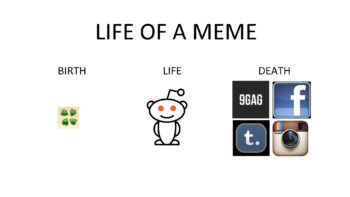 Akin to most cryptocurrency projects, the eccentric subreddit has its paper which details all the intricacies concerning investment in memes. Aptly titled “Step 3: PROFIT! A Numerical Analysis of Investment in /r/MemeEconomy,” the paper talks about the human-meme fiscal interaction in the online community.

The paper states the official currency of community as meme coin (1 M¢ = 1 M¢). The coins can be used to invest in a new meme template or a meme based on its perceived future potential.

Whenever a new meme is posted on the sub, the meme investment bot automatically comments on the post, giving an option to the market investors to put their meme coins into it. Interested individuals can invest by just replying to the auto-bot comment.

While there’s no upper limit to the amount of M¢ that can be invested, investors are expected to put in at least 100M¢. The lower limit of 100M¢ is put in place to separate the risk-takers from quitters.

The ROI on memes is determined by two factors: number of upvotes the memes had at the time of investment, and the meme’s upvote count four hours after it has been posted (also called its maturity period). Similar to stock markets, higher the number of upvotes or value of the meme, higher is the benefit the investor derives out of it.

Conversely, if the meme becomes dead and doesn’t live long enough to see the top of the subreddit before maturity, the investor stands to lose the number of meme coins he had invested.

The mechanism of meme economy could feel familiar to those with experience in cryptocurrency trading. Investing in stable “bitcoin” memes (memes with higher votes initially) is a safe bet but with a relatively linear reward potential. Meanwhile, investing in unpredictable “alt” memes (newer memes with minimal upvotes) could prove to be a risky choice, but with a higher rewards potential.

This behavior of memes emulates that of stocks or cryptocurrencies, which follow a similar risk-return trade-off pattern based on the type of stock or project one invests in.

To fill the appetite of nerds and number-savvy individuals, the dankpaper also talks in detail about the investment return function of memes. The paper even defines a set of variables which are used extensively in forming the basic equation which dictates much of the behavior of memes.

Following are the variables used:

– mid: Midpoint of the logistic function: the value of x for which the S = max/2.

– stp: Steepness parameter of the logistic function: governs how sharply the
curve rises.

Logically arranging the variables as mentioned above, the authors of the paper came up with a set of governing equations:

While the equations as mentioned earlier might seem to be excessively number heavy, they’re not too hard to comprehend. The maximum value max(v0) has an inverse relationship with v0. This means that higher the number of initial upvotes (v0) a meme has, lower its rewarding potential. The opposite is true in case of a lower initial investment (v0), which will offer the possibility of earning steep rewards assuming the meme becomes a success in the subreddit.

As alluded in the official paper, the following is the upvotes-returns graph of an “altcoin” meme with v0 = 3 initial upvotes. 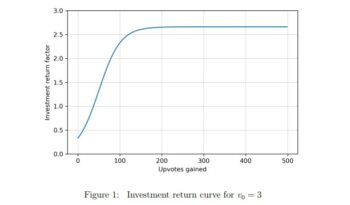 Following is the upvotes-returns graph of a “bitcoin” meme with v0 = 500 initial upvotes. 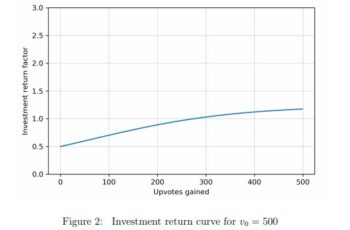 Suppose Jack invests in a meme which has 500 initial upvotes, then it will require earning at least 275 more upvotes before maturity to break even. Following a similar trend, if the meme earns approximately 500 upvotes before maturity, Jack will double earn a profit of 15 percent on his initial investment. Further, if the meme earns at least 900 upvotes, Jack’s profit will be close to 23 percent.

Just like any other form of art, memes have undergone continual evolution to reach where they are today. Starting from rage comics back in the late 2000s, memes have come a long way, and will likely evolve further in the future as long as it remains millennials’ most-preferred way of communication. 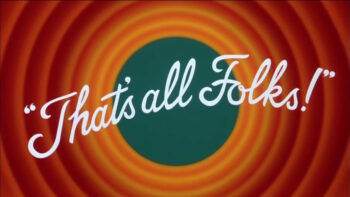