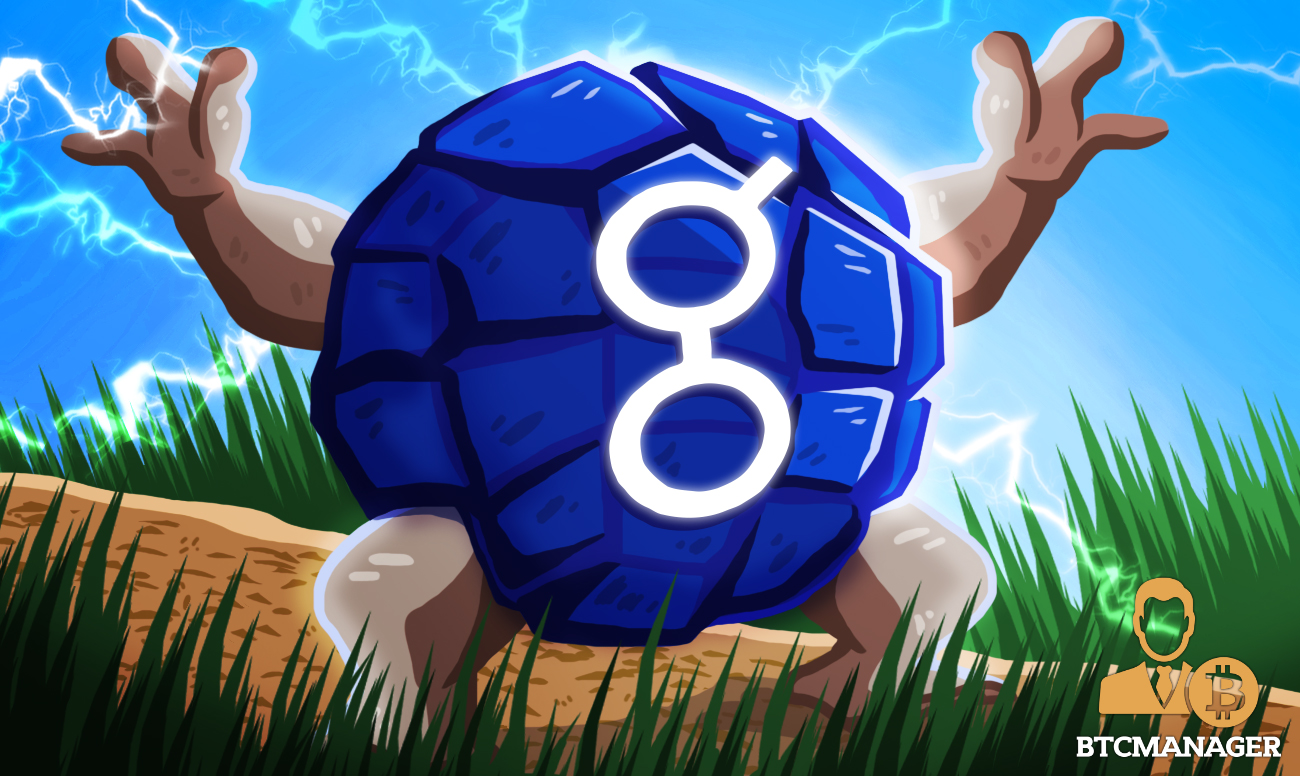 Golem, a project born in late 2016,  aims to combine the computing powers of several computers into a single network. It envisages the creation of a global supercomputer in which everyone can contribute by providing space and computing power in return for a reward in GNT tokens.

Golem is a blockchain platform that aims to combine the computing power of different computers within a single network to build the world’s first decentralized supercomputer.

Golem was launched at the end of 2016 on the Ethereum blockchain before ERC20 tokens became the fashion as a means to launch any project, making it one of the few survivors of the 2017/2018 crypto rollercoaster. The fundraising was a real success, on November 10, 2016, eight million dollars worth of the Golem Network Token (GNT) were sold in an hour, with a total sale of 1 billion GNT.

The initial distribution was 82% to crowdfunding participants, 6% to the development team while the remaining 12% to Golem Factory GmbH.

Golem functions as a novel way to loan out the power of your computer processing unit (CPU), thus allowing users to make crypto gains for lending out idle CPU power. Additionally, it opens up a more affordable means to access heavy-duty CPU power for whatever task they so desire it for. So far use-cases of Golem include big data calculations, machine learning, and rendering. Software developers can also push their software onto the network via the Application Registry, more on that below.

The Golem Factory is a Switzerland-based organization co-founded by CEO Julian Zawistowski, CTO Piotr Janiuk, and COO Andrzej Regulski. This organization is in charge of finding both requestors and providers of computing power.

In the Golem ecosystem, we find 3 types of agents: the “providers” or “suppliers” of computational resources (anyone can offer their own CPU, renting it), task creators/”requestors” or those who need to rent computing power to operate, and software developers.

Every interested developer is free to develop and spread software in the Golem network, simply by registering it in the Application Registry. The latter is an Ethereum smart contract similar to the Play Store or Apple Store that lets anyone publish its own applications that can automatically run on the Golem Network.

The Application Registry is divided into three categories:

The Application Registry together with the Transaction Framework, gives developers the capability to design a custom payment structure (nano payments, per-hour use, etc.) for monetizing their software and/or applications. 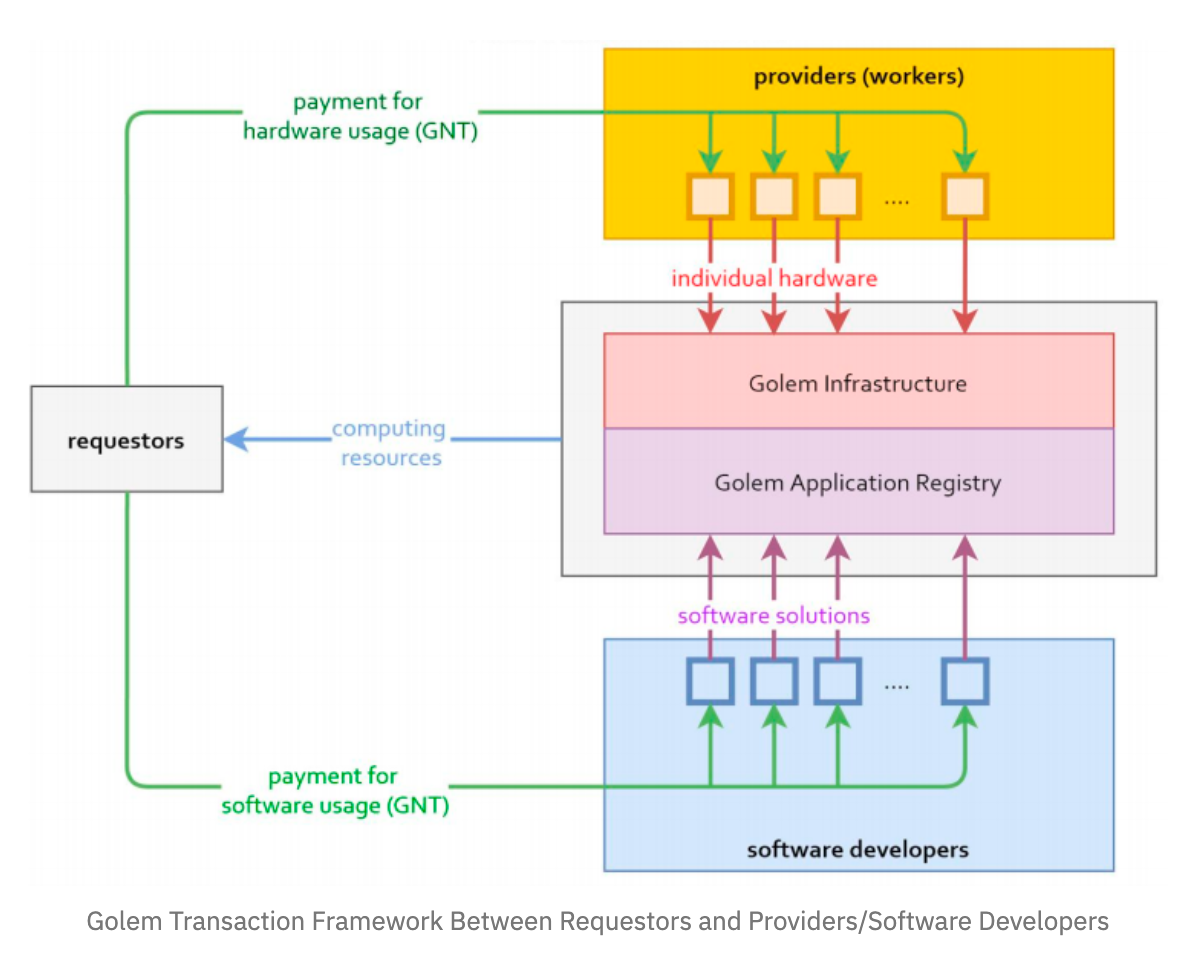 These two, are among the most important features of the Golem ecosystem.

The first is nothing more than an Ethereum Smart Contract which is activated whenever a developer publishes an application on Golem. These applications can then be classified by anyone as whitelisted if trusted or blacklisted if not trusted. Instead, the Transaction Framework will be used by providers and developers to set the price and payment mechanism in exchange for their computational power or application.

Security and integrity on how transactions are processed through the Golem network are mainly given by two elements – concents and Intel Software Guard Extensions (SGX). A concent is nothing but a third party that verifies the data output and financial transactions.
As described in the video by software engineer Lukasz Glen, a concent is an additional service – requires a fee – that clients can query if the other party is acting against the protocol.

Intel Software Guard Extensions is a set of instructions that increases the security of application code and data, giving them more protection from disclosure or modification.

GNT role in the Network

GNT is an ERC20 token and represents the essential component of the platform. GNTs are mainly used for the monetary exchanges with which providers and developers are paid in the Golem community or are distributed to users who certify and verify sales parameters in the Application Registry and Transaction Framework. The totality of the tokens was created during the crowdfunding period and it is therefore impossible to create additional tokens.

As mentioned earlier, 18 percent of the total token bid was assigned to the Golem Team and the Golem Factory and it is mainly used to guarantee project development both from a technical point of view and for marketing operations.

Moreover, considering the price increase of both GNT and ETH, it is difficult to think that the project may be short of funds, allowing for a very long-term vision for development.

In order to examine Golem’s financial health and have a better understanding of the project, it is possible to check Golem’s smart contract on etherscan.io.

In the part 2 we will analyze a real use case that displays the cost of using Golem vs. other rendering farms for a Blender rendering task. Moreover, we will try to understand what are the market opportunities as well as the difficulties that Golem can meet on its long road to becoming the first world supercomputer.