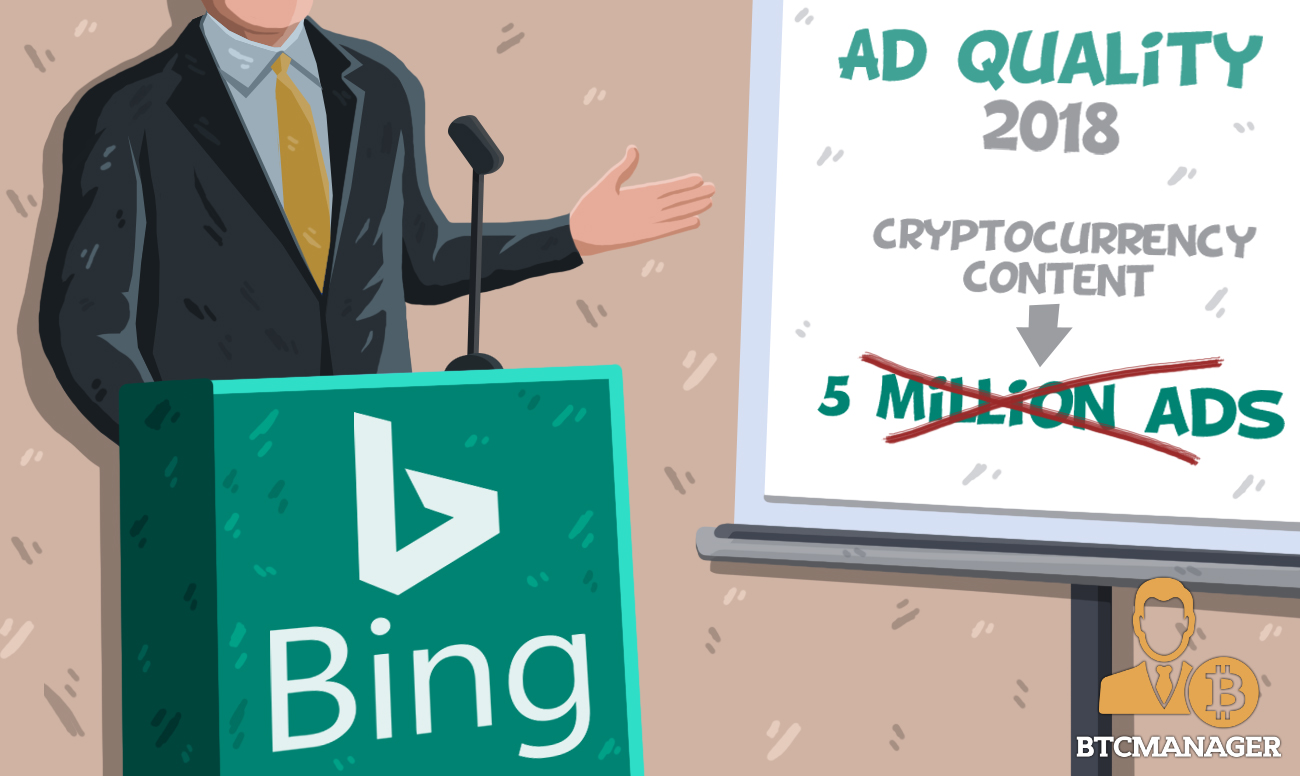 Bing has revealed the removal of about 5 million cryptocurrency-related adverts from its platform in 2018. This number, however, constitutes a minor percentage of the total banned ads by the Microsoft-owned search engine throughout the year. This according to an official report released by Bing, March 25, 2019.

Less Than One Percent

Bing released the details of the cryptocurrency ad ban in its “Ad Quality of the Year” report for 2018; accordingly, 2018 saw a series of malware attacks, frauds, and phishing activities. The company went on to state that almost 200,000 accounts were suspended from its platform. Furthermore, the total number of bad ads were up to 900 million and 300,000 sites were taken off its system.

The cryptocurrency sector however, is not unaffected in the “Bing clean-up”. The blog post further stated that over 5 million ads with virtual currency content were taken down by the company. Also, 2018’s bull run, the volatile nature of digital currencies, and high returns attracted investors.

The company, further explaining the reason for the ban, said:

“There wasn’t much regulatory oversight, and the overall pseudo-anonymity built into currencies like bitcoin made cryptocurrency a prime target for fraudsters and scam artists to defraud end-users.”

As staggering as 5 million sounds, the figure actually makes just one percent of the total number of banned Bing ads in 2018. Again, despite the often repeated rhetoric espoused by critics, the Bing report is another example of cryptocurrency being responsible for only a miniscule portion of the recorded nefarious activities.

Not Your Platform, Not Your Advert

Microsoft’s Bing is not the only company that has chosen to censor cryptocurrency-related ad content. Other centralized platforms such as Facebook and Google have also prohibited cryptocurrency promotional contents.

Back in February 2018, Facebook slapped a blanket ban on ads that carried out unlawful practices and promoted financial services and products related to cryptocurrency, ICOs, and binary offerings. Although Rob Leathern, Product Management Director at Facebook Business stated that the policy would be revised in the future.

Similarly, Google was also forced to ban digital currency ads on its platform. According to the report, the FBI instructed the company to cease displaying cryptocurrency advertisements, as such as were misleading investors. The company, however, went even further to ban all forms of misleading advert content across a broad spectrum of business categories.