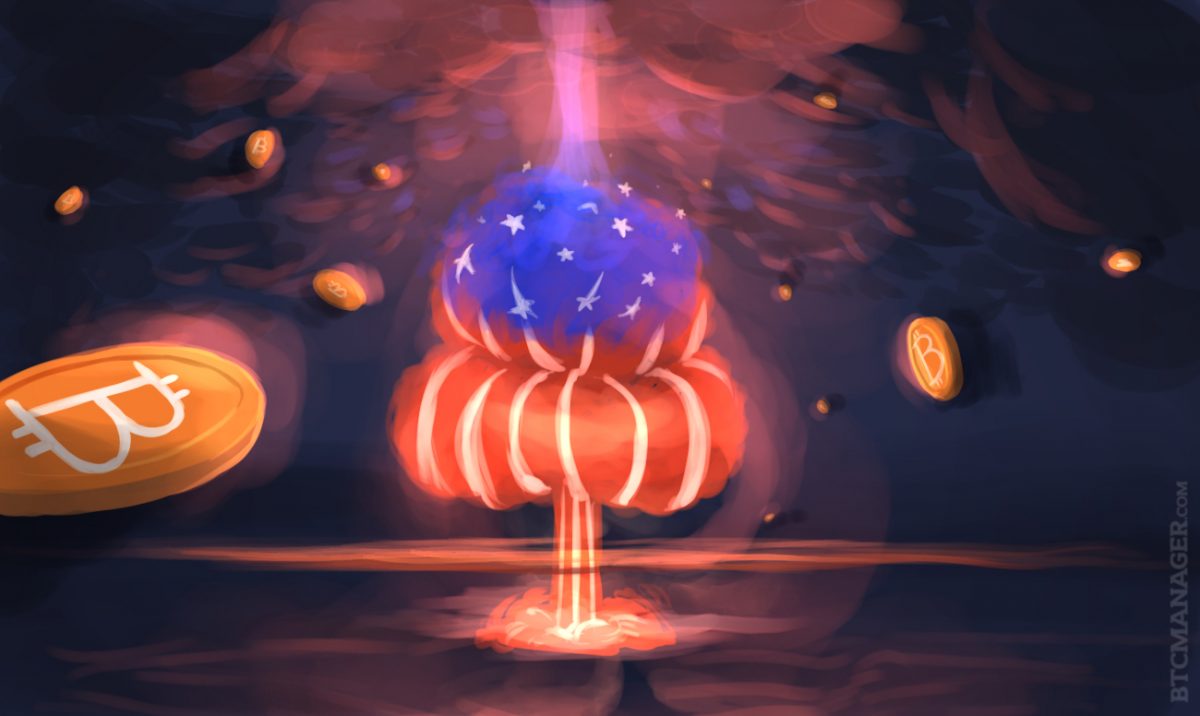 When Donald Trump successfully became the 45th president of the United States of America, most of the media was in shock. But not shocked enough to stop trumping up the idea that Bitcoin’s price rises as a safe haven asset in response, while the world slips off into panic and chaos.

Most media outlets in Europe were outraged about the decision of the citizens of the United States of America to elect Donald Trump for president. How dare they do that? Bitcoin media outlets are less disgusted, but not less biased.

In fact, many Bitcoin fans and blogs celebrated the Trump victory. A few because they actually like him and his political ideas; most, because they like themselves to dance on the ruins of the apocalypse while howling to the moon. And didn’t the election of Trump shoot the Bitcoin price to $730?

German Bitcoin journalist Coinspondent presents a lot of quotes about the Bitcoin community’s reaction to Trump. His quote shows that “the price does not rise because the election of Trump was good. It, however, rises because of the separation of money and the state. A state who will be lead by Donald Trump.”

Let us say it this way; many consider Donald Trump as living proof that democracy is broken. Since Bitcoin is a money not under the control of democracy, it performs better, the worse democracy becomes. And with Trump democracy became very bad. According to Bitcoin journalist, Kyle Torpey, this exactly is the reason why Bitcoin was created.

2/ This is the whole reason Bitcoin was created in the first place.

Shortly before the election, the Bitcoin magazine CoinDesk wrote an article titled “Bitcoin Traders Believe Trump Win Could Trigger Price Boost”. In the article, a hedge fund manager explains, that he considers a Trump presidency as good for bitcoin. “Much like nuclear war would be great for bitcoin.” The more horrific the disaster, the more fear and chaos in the world, the more people turn to bitcoin as a “defensive asset.”

And CoinDesk is not alone with this idea. In the chaos of the day of Trump’s election, media outlets around the world wasted no time, and even before the markets were able to take a deep breath, headlines popped up, announcing a new Bitcoin rally; “Bitcoin Price Makes Gains as Trump Pulls off Unlikely Presidential Victory” (Cryptocoinsnews), “Bitcoin Price Jumps on Trump Victory” (Fortune), “Bitcoin boosted by safe-haven demand after Trump victory” (CNBC). And so on.

On November 9, as the results were made available, it seemed literally impossible for a media outlet to not write a headline like this. Maybe it fitted too perfect with the story of the president that will preside over the end of the world. CNBC even asked Charles Hayter, CEO and founder of Crypto Compare, to explain. He said, that Bitcoin is “again acting as a form of digital gold” and sees a boost as a safe haven asset “when there is uncertainty.”

Nice Story. Fortunately it is not True.

If you read the headlines and the stories, you might think that the whole world economy did crash on the election result while Bitcoin’s final rally to the moon begns. Fortunately, it is easy to test this. Just look at the charts. The ‘Trump Pump’ has been short-lived and bitcoin is back below $700, at the time of writing. 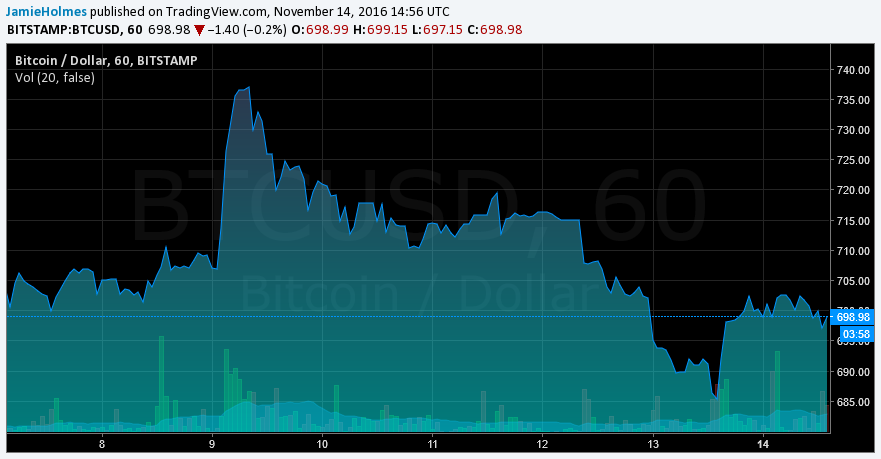 The election of Trump was, more or less, not relevant. Most likely some traders speculated, that people will buy Bitcoins as a safe haven asset, and after this did not translate into a sustained bullish advance, they sold. Some lost a little money, some won.

More interesting have been the stock exchanges. The DAX, the leading index for Europe’s strongest economy, Germany, did go down immediately after Trump’s victory was announced. Likely some traders speculated on the big crash, which did not happen. Instead the price recovered and started to rally. The DAX reached 10,700 points, what is close to a 12 month-high. Some traders won money, some lost.

But at least in the US, there was a crash, right? No. Nothing of that sort. If you look at the Dow Jones, the major stock index of the USA, you see a fall under 18,000 points, and after this a surge, peaking at 18,600 points, a new all-time high.

Also, a cool down in the geopolitical tensions between the US and Russia look promising and the fading unity of NATO defies the logic that bitcoin will appreciate during his presidency, since both of these factor point to greater cooperation and global stability. Contrast this to a HIllary Clinton victory, where she stated she would surround China with missiles and has been criticized for her role in the abysmal Libyan campaign. So on the geopolitical front, an argument could be made there is a reduced role for a “defensive asset” at this moment in time.

While you could point to the protectionist policies that Trump advocated during his campaign, this seems less likely to be translated into action, with more of a focus on policies such as deregulation and fiscal expansion.

All Eyes are on the Federal Reserve

Trump’s plans for fiscal expansion and infrastructure spending have provided investors with confidence and the week beginning November 14 has seen the US Dollar make strong gains, with a shift away from bonds and into stock markets. This has also been the complimentary policy that the Federal Reserve is looking for so they can take action.

Moreover, despite the shock victory, the Federal Reserve reiterated that interest rates are likely to rise when the FOMC meets next month, on December 13-14, which would provide an impetus for BTC-USD to fall even further. Following the victory, on November 11 Stanley Fischer, Vice President of the Fed, stated:

“In my view, the Fed appears reasonably close to achieving both the inflation and employment components of its mandate. Accordingly, the case for removing accommodation gradually is quite strong, keeping in mind that the future is uncertain and that monetary policy is not on a preset course.”

As Trump moves the focus from monetary to fiscal policy, we will likely see a less independent central bank to compliment the new administration’s fiscal stimulus. Also, higher interest rates will also be a driving force for a stronger Dollar. Therefore, markets will be eagerly awaiting the next big event, the Federal Reserve decision, which could intensify a downward spiral for bitcoin.

So while the Trump victory temporarily boosted Bitcoin, it was very short-lived. Analysts expect further upside for equities markets on the policy implications, which could attract investors away from bitcoin, however, key questions remain; will the federal debt continue to balloon and has the sector shift into stocks been overdone?

Bitcoin may be having a hard time in the immediate aftermath and during the market’s adjustment to the new administration. But if the shift by investors into stocks turns out to have been overdone, it could be the case that underlying bullish pressures lie dormant, for now.