Weiying Chen, the founder of Kuaidi Dache, announced on May 28, 2018, that a blockchain-run cab-hailing app is in the works. The entrepreneur had previously allied with Didi, another ride-hailing app, and scaled the merged entity to China’s number one ride-hailing company – Didi Chuxing – with a valuation of over $1 billion.

In a Chinese Industry Expo organized in the southwest city of Guizhou in China, Chen explained the project to an audience of big data enthusiasts.

Chen is allying with Yang Jun, the co-founder of a China-based on-request local services company called Meituan, with the end goal of generating a blockchain-based platform that provides ancillary services like delivery systems and chauffeurs, in addition to the core ride-hailing business. 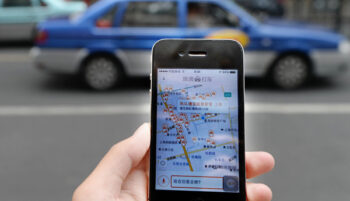 A customer uses DiDi in China

While Chen aims to build the app on a blockchain platform to challenge the existing market leaders in this domain for safety, Jun informed that his business visions involve keeping people’s needs in mind.

Jun has been quizzing himself about the importance of blockchain technology as well. He explained that the innovation backing Bitcoin is much more than just an aid for digital currency, as it can be used to create contemporary and improved economic structures in general, and drive traffic from the internet to the app in particular. Thus, the technology could help provide data to facilitate tailor-made services as per the consumer’s requirements.

Chen announced at the Expo that the cab-hailing lifestyle app would be an entry for blockchain technology into social implementation on a large scale. However, neither of them let out a particular date or schedule as to when the project will be inaugurated. 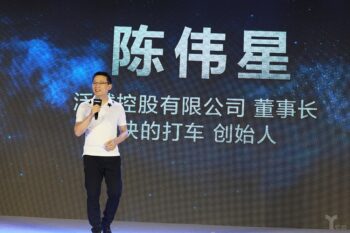 The tag team has a history of being enterprising, prosperous businessmen. After the merger, Didi Kuaidi was worth a staggering $60 billion and is reportedly considering an Initial Coin Offering (ICO).

This effort won’t be the first foray in the blockchain industry for the two entrepreneurs. Chen is the founder and owner of Funcity Inc. and is actively investing in the sector. As for Yang, he is the creator of Skyline Invest and an active blockchain evangelist in the Chinese startup ecosystem.