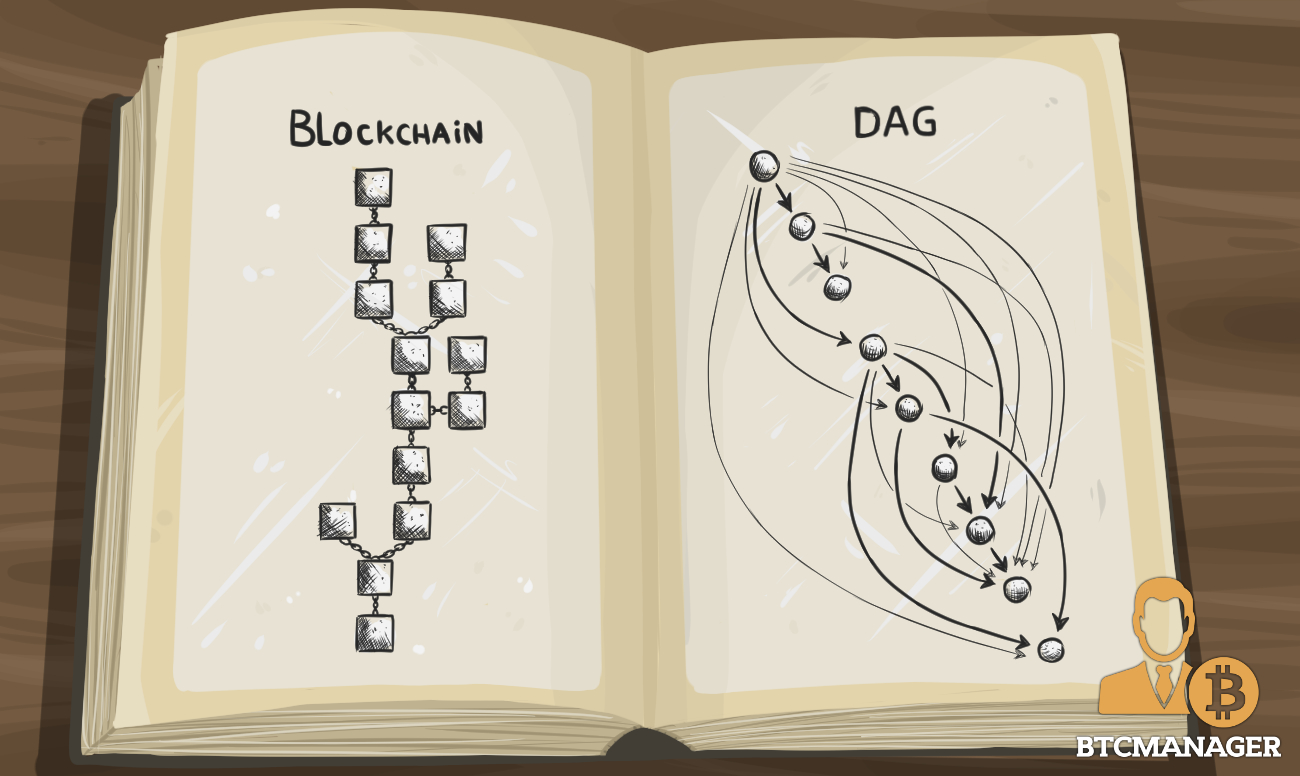 As technology continues to advance, so will the blockchain. Just picture what computers and the Internet were like twenty years ago compared to what they are today. Blockchain technology is about to have the same exponential growth. Development teams all over the world are constantly trying to solve the current problems with blockchain technology by combining similarly complex technology (such as AI), and some are even trying to re-invent the wheel. This is where DAG comes into play.

What is a DAG and how does it Differ from the Traditional Blockchain?

A Directed Acyclic Graph (DAG) ledger is a “directed graph” data structure that uses the method of topological ordering to verify transactions. The “directed graph” method requires every node that is wishing to perform a transaction to first verify the previous transactions of two other nodes as well. What makes this topological sequence so efficient is that the order verified transactions can only go from earlier in time to the most recent.  This is very different from traditional blockchains, and one great example is how it differs from Bitcoin’s blockchain.

Bitcoin has always been inefficient due to its Proof-of-Work (PoW) infrastructure. One of the biggest issues with the PoW method is that blocks can not be created at the same time. The linked storage system only allows for one chain on the whole network. The transactions that occur around the same time are kept in the same block, and all of this is happening while the miners compete for the block transaction verification.  The block that verifies the transaction gets the reward.

On many blockchain networks throughout the crypto industry, it is common practice for transactions to be mined into blocks, and the transaction sequence is maintained by the pre-hashes between these blocks. This differs from the DAG as the DAG makes every transaction directly involved in maintaining the sequences. This allows users to skip the process of mining after a transaction has been placed, which makes DAG block-less and more efficient.

One single block on the Bitcoin blockchain is created about every 10 minutes. Ethereum is a little better, taking around 15-20 seconds for block validation under optimal operating circumstances. However, they are simply inefficient platforms when compared to what DAG can provide, which includes transactions at speeds that are fractions of what Bitcoin or Ethereum would be under their best operating circumstances.

Due to the DAG’s block-less nature, the transactions run directly into and through the DAG network. The DAG process is much faster than those of blockchains based on PoW and Point-of-Sale (PoS). With DAG, as each transaction is linked to the two previous ones, the miner is taken out of the equation. A major benefit of the DAG structure is that transaction times actually go down as more people are using the system.

With the advancement of DAG, a high functioning system with minimal transaction fees is possible. Given the high fees associated with the Bitcoin or Ethereum networks, facilitating fast transactions at low costs dramatically sets the DAG structure apart from existing processes.

The DAG structure also lends itself well to applications that require scalability in the thousands of transactions per second. A need for DAG was particularly evident in the launch of CryptoKitties (a blockchain-based game of buying, selling, and breeding crypto kitties). This game clogged the Ethereum network, which resulted in slow transactions and high fees.

CyberVein is setting itself apart from other blockchain companies through its implementation of DAG technology. The vision behind the CyberVein network is to provide the public an opportunity to safely process, trade, and share large amounts of private information.

To solve the problems that many blockchain networks are facing, CyberVein is improving on DAG technology by introducing a “novel resource-conserving consensus mechanism.” CyberVein is also implementing a modified version of the traditional Solidity contracting language to adapt it for the monetization of vast amounts of data being processed at the same time on the CyberVein network.

One of CyberVein’s main uses is for the maintenance of databases on the blockchain itself. This means that all blockchain-based databases are mediated by blockchain transactions. To ensure that this process works properly, CyberVein has added data-processing functions to the current Solidity contracting language. These innovative additions include functions that have been designed to directly monetize data that is kept throughout CyberVein databases.

By replacing Witness Nodes with an algorithmic solution based on Genesis Smart Contracts, CyberVein works through this problem. To establish an agreed upon reference point for all future transactions, Genesis Smart Contracts are written into the initial entries of the ledger. All transactions that occur in the network are not simply linked to two predecessors, but are also linked to these Genesis Contracts, adding another layer of security.

As CyberVein lacks blocks and the process of mining entirely, it would make sense that the maintenance of consensus works differently than it would on a traditional blockchain platform. While there is a built-in consensus-keeping mechanism with in the Person-to-Person (P2P) transaction verification mechanism, DAG ledgers also implement a version of Bitcoin’s PoW.

CyberVein solves the inefficiency problem with PoW with a “new kind of DAG-specific consensus algorithm called Proof-of-Contribution.”  Proof-of-Contribution (PoC) is different from PoW as it measures the amount of disk space a node uses to store parts of the ledger’s transaction history, also known as ledger shards.  The network compensates nodes in proportion to the amount of storage space they provide. As disk space has continuously been a scarce resource in the crypto and blockchain communities, PoC “serves as a barrier to outcompete other nodes in the verification process, making attacks costly and infeasible.”

CyberVein’s Solution for the Issue of Decentralization

While many DAG proposals have claimed to be decentralized, CyberVein saw room for improvement. According to CyberVein, existing DAG networks have “privileged ‘Witness Nodes,’ to reduce the possibility of various attack vectors and to create an ‘official’ order of transactions.” Network developers can appoint Witness Nodes or users can elect them, but either way, CyberVein points out that such “…central points of control and failure are obviously a serious design flaw for a system that claims to be decentralized…”

To improve on this issue, CyberVein uses the PoC consensus algorithm. Instead of using Witness Nodes, as done by previous companies, CyberVein maintains a network of “Full Nodes.” The benefit of these Full Nodes is that they store the entire CyberVein Ledger.

When a node on the CyberVein network wants to join the Full Node Network, joining nodes must provide large amounts of scarce disk space. This requirement would force an attacking node to “outcompete the storage capacities of the entire CyberVein network in order to have a chance to approve or to execute a single double spending attack.”

CyberVein’s case uses will be any place that vast amounts of data need to be immutably processed by several parties simultaneously.  The company suggests that “Competitive Cooperation” is one valuable function of CyberVein. Through CyberVein, competing parties, such as big data providers, pharma companies, scientific research, or even machine learning researchers, can share large data sets and become more efficient, without sacrificing their individual economic interests.

This development stands to change the world of cross-industry research and development. CyberVein encourages this type of cooperation by offering economic incentives for universities and research facilities to maintain their huge datasets while also ensuring such datasets are available to the public. Public access to these large datasets empowers researchers to broaden the scope of their study and improve their ability to make accurate conclusions.

Another huge application of CyberVein and the vision driving the project is the process of collecting data in a secure manner. Through its transparent design, CyberVein will allow the safe collection and processing of vast amounts of information without any central points of failure or even control.

Where blockchains have continuously faced issues, DAG technology is positioned to be the solution that the crypto-community needs. Improved network functionality, reduced transaction times, and lower transaction fees will all be possible via DAG technology. As problems with scalability continue to be found within the blockchain system, many users may attempt to switch over to newer, more efficient systems such as the DAG. CyberVein is already pushing the boundaries of what is possible with the implementation of advanced DAG technology. The crypto industry could see a shifting from reliance on PoW or PoS to PoC. To say the least, it will be interesting to watch this technology and companies like CyberVein, continue to develop.