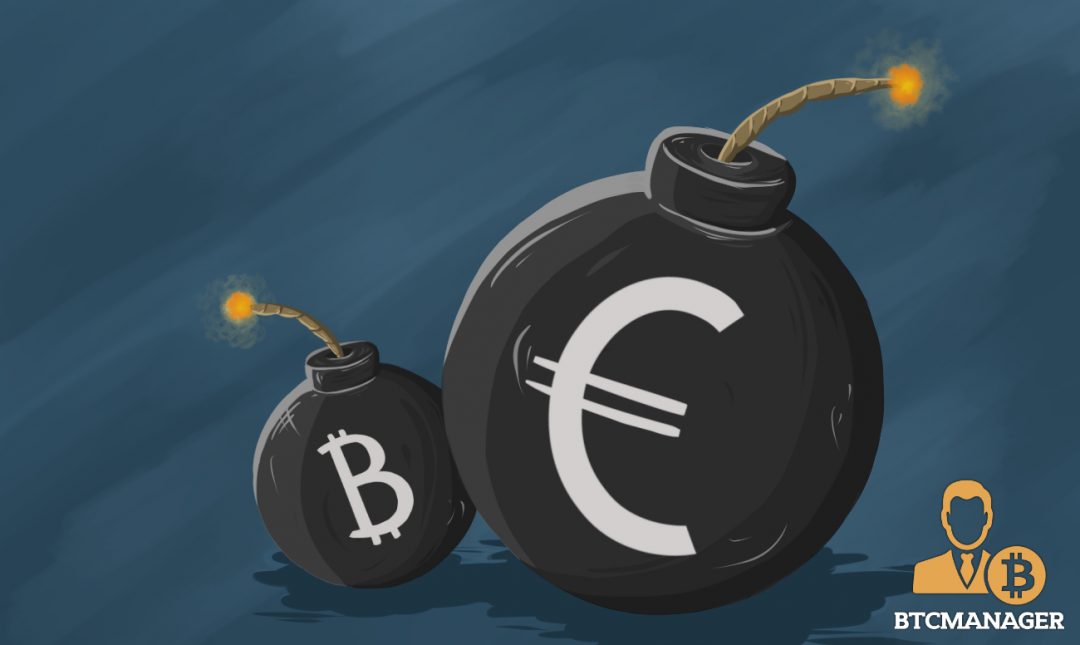 Over the past few months, bitcoin mania has set in and is driving an enormous increase in the investment of cryptocurrencies. Digital monies have increased the total market capitalization by billions, taking in new funds from nearly every country in the world.

These leaps in value have created entrances for institutions within the finance and payment sector to begin accepting the digital currency. But if there is rapid acceptance of bitcoin, why are skeptic worried that it would wipe out billions of euros of wealth from investors?

The Value of the Euro

The Euro is a currency used within an economic union of major European countries to consolidate financial strength and increase prosperity with one broad free trade agreement. The principal value behind the Euro is the collective GDP of all EU-inclusive nations combined – currently sitting ~$18 trillion. This seems to be a rational way to describe the total value of the Euro, but there’s an issue.

The Euro is fiat, meaning it’s only backed by the government and its constituents; if neighboring countries lose confidence in the value of the Euro or EU citizens do, there will be a precipitous drop in the value of the currency. This kind of fall is something that happens on a regular basis with bad news from the European Central Bank (ECB).

Of course, other issues persist within the world of government-backed currencies: 48.1 percent of the EU economy is traditional government spending. A government’s spending can be an issue since the revenue is earned via taxation, rather than by production of goods or services, thus depleting the much-needed private investment to continue developing the economy and falsifying the total production value of the EU.

Another structural issue with the Euro is that it is in a perpetual state of decline – each year, the Euro inflates one to two percent – which is an extremely conservative estimate considering the constant application of quantitative easing (QE). Ultimately, when we look at the structural issues of the EU economy and its continuous self-induced decline, we have much more at stake: $18 trillion and the impact on the global economy from a reduction in a vital currency’s value.

Currently, the total “value” of Euros in circulation is ~1.1 trillion, while gold reserves of the ECB are a mere 17.82 billion. This clearly shows that the Euro is backed by no more than a vote of confidence. Even more damaging to the reputation of the Euro is that only 6.7 percent of global trade is done in Euros. This framework outlines another feature of our current financial system: that the only institutions that genuinely value the Euro are European dignitaries.

The Value of Bitcoin

Now that we’ve established what the Euro is and how it is valued, along with the problems of valuation, we can move on to the same details for bitcoin and why it is vastly less destructive than the Euro.

Furthermore, when we look at bitcoin as more than just a store of value and begin to look at it as a means for transacting value, we get a very similar valuation to its total market capitalization. Using this metric, we also uncover the subjective value of each “hodler” is nearly equal despite reasons for buying the digital currency in the first place.

When we take this a step further and look at the structure of the network, it is currently finite. Like gold, there is only so much and no more will exist after all has been “mined.” Unlike the Euro, we cannot create new Bitcoin out of thin air.

This concept is controversial as it engenders concerns that value can instead be formed by merely changing the code and creating a new coin. Thus we have the swath of altcoins and ICOs, soft and hard forks, which cater to this idea.

The only flaw in this argumentation is that in a free market, participants will only value what they wish. Thousands of coins have been created, but only a handful have market values anywhere near a fiat currency or any traditional asset class. This clearly shows that the market will and does reject new coins that are not thought to be legitimate.

The final criticism of Bitcoin is that it will go bust once miners have unbound all of them. The bust fallacy is not true because if we consider that mining, or providing hashing power for the network, is rewarded by transaction fees at that point. When looking at the total market capitalization of all cryptocurrencies together, the amount of money lost during a bust is significantly smaller than what we see with the Euro.

Overall, the only destruction is creative destruction. Bitcoin is poised to overtake current technology for the internet and finance, not considering all of the other blockchain protocols. If and when this technology passes more archaic versions, it will begin to take on the total market valuation of the internet – $19 trillion – and the financial industry as a whole.

What the Euro would do is perpetuate the same issues that have existed in the past: create booms and busts that destroy the welfare of its populace.