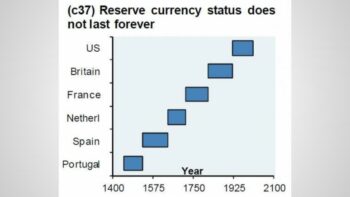 I don’t want to spend a lot of time on the inexorability of change. Whatever opinion one holds of the USA and its future prospects, history speaks loudest. Current events also show a concerted divestment from the Dollar, best illustrated by another chart.

Searching Zero Hedge for terms like “global reserve currency” will yield further evidence to support the view that the advent of the next global reserve currency is nigh; most such evidence regarding trade deals between China, Russia and the BRICS, as well as various alternatives being developed to the IMF and World Bank.

For example, former World Bank chief economist, Justin Yifu Liu, stated that “…the dominance of the greenback is the root cause of global financial and economic crises… the solution to this is to replace the national currency with a global currency.”

What’s Next? SDRs, Currency Basket, Gold… Why Not BITCOIN?

Lately the idea of Bitcoin as global reserve currency has garnered attention, even from such sinister, tentacular entities as the Council on Foreign Relations.

Coinbase CEO Brian Armstrong, who’s either hopping aboard the hype-train or got a tentacular tap on the shoulder, chimed in late July 2015 as follows:

“Many will find this crazy, but I think Bitcoin could surpass the dollar as reserve currency within 10-15 years.”

Well, Brian, that’s only crazy if bitcoin remains decentralised and is truly the product of an independent genius or collaboration thereof and not, in fact, owned by whichever deep state techno-Leviathan might mobilise its servile politicians, greasy bankers, and other assorted agents to push bitcoin as global reserve. Further, given bitcoin’s universal nature, we must assume any such deep state to be supranational and comprising at least the two biggest players in bitcoin / the world: America (coding) and China (mining).

It doesn’t track that the US Fed or People’s Bank – any world central bank for that matter – as a component of such a powerful nexus would push for a “Bitcoin Woods” re-organisation of the global financial system… unless they hold the key to Satoshi’s quadrillions (or whatever units come next), as Bitcoin’s price rises commensurate with its role as the world’s prime unit of exchange.

All of that is pretty far down the rabbit-hole, so for the purposes of this article I’m going to assume bitcoin remains decentralised and unrooted. So then, assuming Satoshi to be a “true prophet,” the above reasoning eliminates bitcoin as a potential global reserve currency, barring the total loss of control by the powers that be. Arising from such an outcome, survivors would get to choose their own monetary system, rather than having it imposed from above—and they might well choose bitcoin.

Such a failure of the status quo is certainly possible (although not the sort of doomily contrarian view I’d expect from Brian Armstrong) if the prevailing financial system, in all its over-indebted and over-leveraged morbidity, experiences an uncontrolled collapse. Bullion, barter, bullets, and bitcoin might be the only acceptable trading methods once the dust settles. However, it’s far more likely that the current global reserve system will instead experience a controlled demolition of sorts, once insiders have placed and hedged their bets accordingly. In which case, implementation of an altcoin as global reserve currency is probable.

Bitcoin XT, perhaps? Certainly a fork with brand recognition under the control of a clever fool known for trying to neuter Bitcoin’s fungibility and pseudo-anonymity to make it more palatable to the “mainstream” would suit the suits. If Bitcoin XT gets a big media push proclaiming it to be like bitcoin but better, due to being safe for children and free from terrorists, that’d a be a clue.

Then again, banks like Citi are currently messing around with permissioned blockchains sans Bitcoin, which Andreas Antonopoulos  aptly compares to intranets vs the internet.

Eventually though, banks might hit on something which works for their purposes. It’s this mutant future-fork which could be either the model or the candidate for GRC.

Why a blockchain protocol for the next reserve currency? Why not gold?

In a word: programmability. Let’s say you’re a megalomaniacal economic central-planner. Chances are you’re busier than a one-armed wallpaper hanger, what with keeping the world going round with your various monetary levers.  You have to:

Programmable currency is your new best friend as it lets you put a lot of this work on algorithmic auto-pilot. Simply feed the Artificial Intelligence raw data from your pervasive surveillance network and it’ll happily pull the relevant levers whilst you nap in your coffin; surely every central banker’s dream.

To put it more seriously, if we have a top-down shift to global reserve cryptocurrency (GRC), it’ll be because it’s the most powerful and convenient tool with which elites can direct world affairs.

Sure, its imposers might throw in the sop of backing by whatever fiats are still functional at that point, maybe some precious metal too if things get medieval, but crypto will form the structure if not the cladding. Citizens will go along, given how deeply enmeshed most are within technological society and how well-adapted crypto is to such an economy.

For similar reasons as to why they’ll reject bitcoin, the last thing the moustache-twirling financial elites want is for some well-funded guys in a garage to invent a ninja mining chip and 51% their shiny new global reserve system.  In their ideal world, there will be authorised miners only, probably hashing from deep within the vaults of participating central banks; plebs verboten. Technically, this should be easy to achieve if the network requires an authorisation before you broadcast or receive transactions.

Although a system with minor players gravitating toward competing supernodes would largely be business as usual post-Pax Americana, I doubt uber-monopolists would want to trigger a hashrate arms race, competition famously being bad for business.

That said, getting all nations to buy into the system, even assuming a fair launch, is hard if they know China is fully geared up to mine an increasing majority of blocks from genesis onwards.

What’s needed diplomatically, assuming the next global reserve currency isn’t imposed on a defeated world by the last man standing, is a way to balance the economic influence of nations in relation to their power. This gives at least the appearance of fairness and equal opportunity.

Mining rate or reward-split determined by national or regional factors, be it some mash of population, GDP, gold reserve, military power, environmental rating or whatever, is what has the best chance to achieve consensus and buy-in.

Given how well the stealth tax of inflation has worked out for the arch scammers so far, I expect Dogetastic infinite block rewards from GRCcoin.

People’s Global Money for the Folks

As cynical as this might read, I do think that even a rate-limited GRC, albeit inflationary and permissioned, offers a glorious, epochal political opportunity, not just for the 1% fat-cats but for the rest of us IF we do it right.

Here’s how: we can make the rate-limiting factor a measure of public satisfaction with local governments and regional alliances. If government coffers were to shrink beneath transparent public block-records when politicians fail to deliver the goods, well… That might keep them honest. And if EU-style conglomerations wanted financing they’d similarly need to keep up their satisfaction ratings.

To sum up, I think they run as follows: