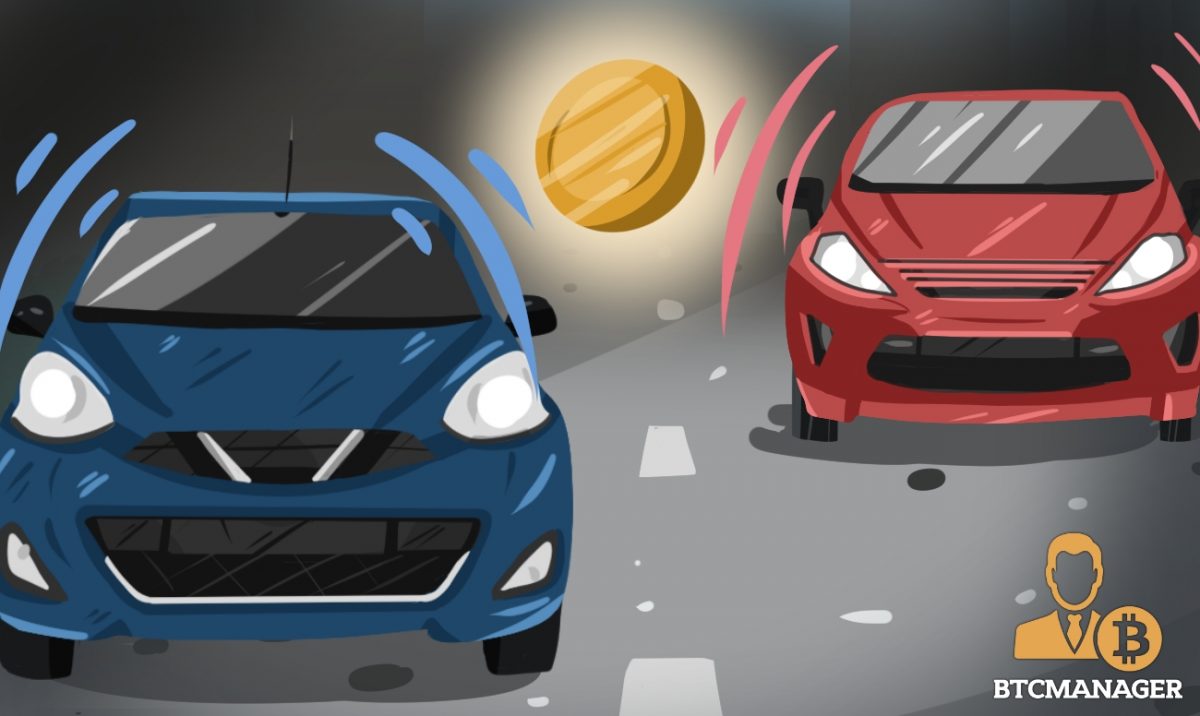 Ford Motor Company has been awarded a new patent that reimagines intelligent cars and a future motoring experience involving AI and utility tokens. Ford’s license considers that vehicles will not only actively communicate with each other but also use a token currency as a transactional aid to buy passage and preferences.

Back to the Future

The result of this innovation is to hopefully reduce traffic and optimize every driver’s journey. A number of the most prominent motor corporations are also investigating more intelligent vehicles, but with mixed results.

Known as “Vehicle-to-vehicle cooperation to marshal traffic,” the awarded patent was published on March 26, 2018, by Ford Global Technologies.

Envisioning that inter-vehicle comms can map out and coordinate multiple vehicles’ location and speed, the geo-location blockchain system seeks to at least partly offset “the psychology of human drivers who focus on their individual travel time preferences.”

The “Cooperatively Managed Merge and Pass (CMMP) system” patented allows for monitoring and recording driver behavior, which is then “evaluated in a collective manner by themselves [the cars]” as well as “other participating vehicles.”

In a nutshell, a vehicle entering a location’s traffic grid alerts and negotiates with all other local cars and optimizes travel for all parties. The token application allows drivers to pay for preferential right of way.

The documents also outline the system’s facilitation of messaging and transacting between vehicles. The patent reads as follows:

“The CMMP system operates with individual token-based transactions, where the merchant vehicles and the consumers’ vehicles agree to trade units of cryptocurrency.”

The CMMP tokens are also employed in validating and authorizing transactions following the request of a “consumer vehicle,” the “merchant vehicles” can either choose to occupy lanes geared for slower traffic or facilitate the consumer vehicle’s passing as they see fit.

They also say that the system will allow “particular cooperative vehicles to drive at higher speeds” in traffic lanes that are not as occupied and also to merge with traffic and freely pass as required.

The patent explains that the other vehicles participating in the system (referred to as ‘merchant vehicles’) will “voluntarily occupy slower lanes of traffic to [allow] the consumer vehicle to merge into their lanes and pass as needed.”

Intelligent Cars that Do all the Driving

The potential application of a vehicle-based cryptocurrency could include being used as a means of payment at tolls, for licensing, or any vehicle-entry service.

Drivers would even be able to pay more for an extended privilege, compensating other road users for their cooperation.

By way of an example, if a driver of a “consumer” car is running late for a scheduled appointment, they can “request to pass any participating merchant vehicles for a duration of [ten] minutes on a particular road or highway for 60 CMMP tokens, at a rate of [ten] seconds preferential access per token.”

Ford advertised for blockchain expertise during 2017 and, although hitherto not known as a blockchain enthusiast, it is clear that the car giant is at the forefront of developing more intelligent cars.

And to stay there, it is employing blockchain technology. As a significant component of the growing Internet of Things (IoT) network, consumers’ cars could soon be taking much of the hassle out of driving.