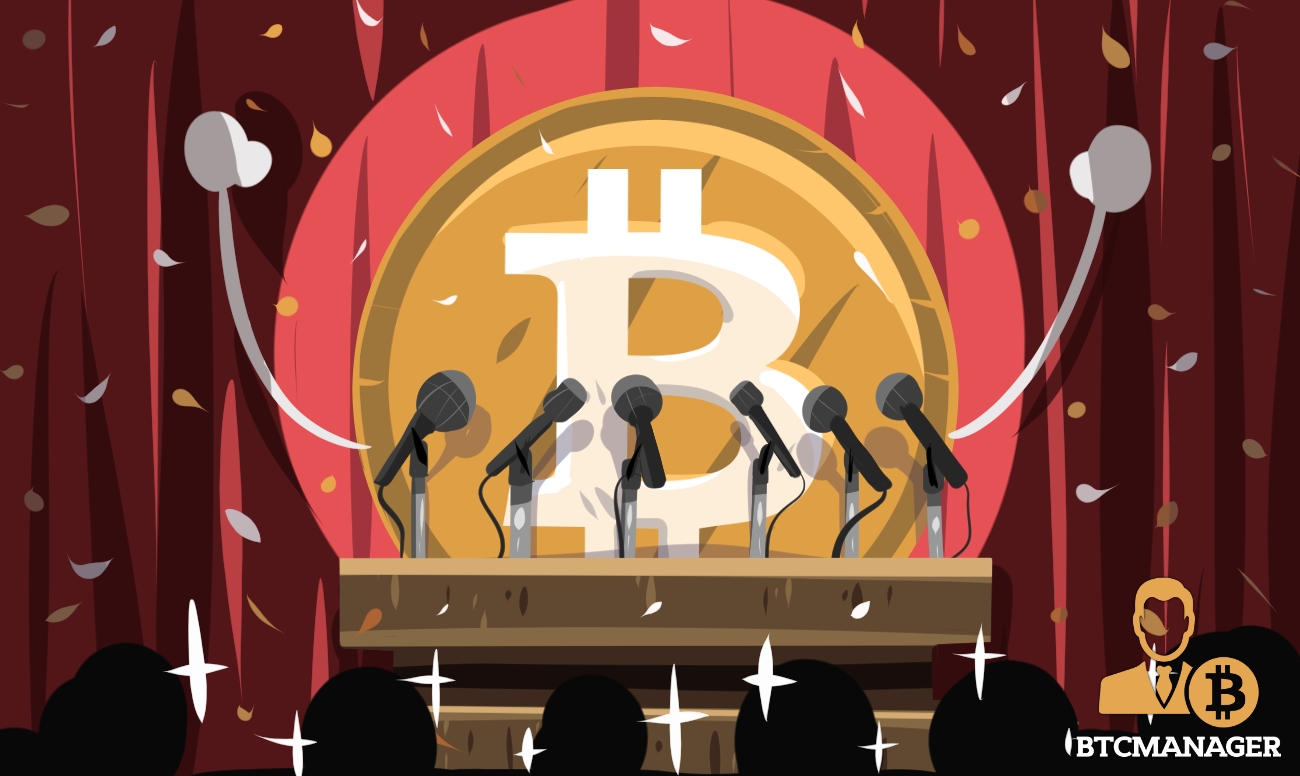 A new report has revealed the perception the American public has towards digital currencies, especially in the context of politics and political party funding. The report was prepared by Clovr and is called “Crypto and Politics: Voters Perceptions of Cryptocurrency and Politics.”

To prepare the report, Clovr researchers queried 1,023 people using Amazon’s Mechanical Turk. The respondents were required to be eligible U.S. voters and asked to disclose their political party affiliation in the course of the survey. Researchers believe that political party affiliation was an important metric for the study because it allowed the survey to achieve a representative sample of the American voting public.

Respondents were also asked to identify themselves on a seven-point scale which measured knowledge of cryptocurrencies and the DLT sector as a whole. Interviewees who were identified as “extremely familiar” of cryptocurrency throughout this study were those who characterized their depth of knowledge as the highest possible level on the scale provided.

The survey focused on voter perceptions of digital currencies, exploring whether the public feels there is a place for them in the political machine. The survey also sought to find out if the negative perception that plagues bitcoin continues to permeate in the face of the public. The report is an insightful look into how registered U.S. voters believe digital currencies can affect the political process.

Does Crypto Have a Place in Political Funding?

A former aide to President Barack Obama, Brian Forde, made it into the history books as the congressional candidate who received the largest donation in bitcoin than all previous congressional candidates combined. Forde achieved this feat when his campaign was around the six-month mark, earlier in February 2018.

Forde, who worked in the Office of Science and Technology Policy during the Obama administration, was running for the 2018 California congressional seat. His efforts during the prior presidential administration had endeared him to the many technology giants who reside in California leading to significant donations in bitcoin. Forde’s donations came from prominent figures in the crypto sector such as Tyler Winklevoss, Brad Bonham, and Peter Briger.

For those contributing digital currencies to Forde’s campaign, it is an ideologically motivated action. Stan Miroshnik, the Chief Executive Officer of the Element Group, an investment bank focused on digital-token capital markets, contributed 0.656 BTC to Forde’s bid. Miroshnik explained the large donation, saying:

“He’s walking the walk and speaking our language. If you’re willing to go through the pain of actually taking cryptocurrency, it’s a great endorsement of the philosophy we’re all pushing.”

Moroshniks’ contribution was at the FEC-mandated limit of $2,700 imposed on primary campaign contributions. However, the Federal Electoral Commission (FEC) has yet to release any further guidelines regarding digital currencies and political funding beyond a 2014 advisory. The advisory stated that candidates could receive donations in BTC, and its counterparts, that totaled to $100.

At the time, Forde’s campaign was questioning how to handle the donations in light of the lack of clear legal regulations and had queried the FEC for guidance. Forde’s campaign needed advice regarding how to report contributions as high as the maximum limit of $2,700 as well as whether they were legally allowed. Joe Bowen, Forde’s campaign manager, said:

“It’s really a microcosm of where our government is on this stuff.”

The confusion makes it difficult for those who would like to donate digital currencies as well as those who would like to receive donations in cryptocurrencies. Bowen believes that all of Forde’s donations comply with the FEC guidelines. However, this is very much a subjective matter, and before the FEC updates its statements, much of the discourse is effectively speculation.

The Clovr survey, however, indicated that American voters were ready for digital currencies to enter the realm of legally acceptable forms of donations in political campaigns. Less than a third were of the opinion that donations in digital currency should continue to be treated differently to fiat currency donations. The actual percentage was at 21 percent.

Acceptable, but not Equal

Fiat currency, received in various forms, is legally acceptable according to FEC guidelines. Campaigns may accept checks, cash, and credit card transactions as contributions to the bid fund, as long as they remain within the $2,700 limit. However, cryptocurrency donations are limited to a paltry $100. Additionally, the FEC clarified that bitcoin donations were only allowed as in-kind contributions.

The FEC explained that bitcoin donations were acceptable in the form of subsidized rent, donated items, equipment, supplies, or other miscellaneous items. Moreover, The FEC specified that the donation must be reported according to the market value of the digital currency at the time of donation.

Most states are towing the FEC line and have campaign finance laws that are similar to federal statutes. However, some states are considering enacting new legislation or altering existing laws to allow candidates to accept donations in cryptocurrency. Tennessee is the first state in the USA to ratify regulation that supports the acceptance of political contributions in bitcoin. Campaigns in Tennessee are allowed to accept digital currencies though they must cash them out first before they can access them. Detractors though have characterized the language in the Tennessee legislation as somewhat vague.

Additionally, the states of Oregon, Wisconsin, and Virginia are also considering enacting broader legislation that supports digital currencies but are in the early stages with nothing major to report. The Secretary of State of the state of Virginia, Dennis Richardson, believes it is imperative for lawmakers to continuously adapt to a changing world. Richardson stated:

“Cryptocurrency is here to stay, and Oregon needs to adapt to that reality by allowing this new form of donating. Allowing cryptocurrency to be a part of our elections process is a new and innovative way to expand participation in Oregon elections.”

On the opposite end of the spectrum, the State of Kansas outlawed donations in bitcoin for political funding. The state justified its ruling, saying the bitcoin had a host of challenges that made it unsuitable as a tool for political contributions. The top of these concerns were security and transparency. The Kansas Governmental Ethics Commission ruling was made in October 2017. Mark Skoglund, the Executive Director of the Commission said:

“Bitcoin is a digital currency. There is no physical manifestation of this currency in any way. It’s just alphanumeric characters that exist only online. It is not backed by a government. The value is subjective and highly volatile. However, there are millions of people who utilize bitcoin.”

North Carolina has also refused to allow donations in bitcoin and other cryptocurrencies. In August 2018, Republican candidate Emmanuel (E.J.) Wilder requested the board allow him to receive donations in digital currencies. Wilder believed the legislation would signify the State’s progressive culture about emerging markets. But the forward-thinking state unexpectedly denied the request. Kim Westbrook Strach, the board’s Executive Director, stated, “We do not have the confidence that we could adequately regulate contributions to a political campaign in North Carolina in the form of cryptocurrency.”

While regulators are wary of bitcoin and other digital currencies as a tool for political donations, the public seems to hold an opposite opinion. Voters were found to view bitcoin and its counterparts as suitable for use in the political machine. The report states:

“62 percent of voters extremely familiar with cryptocurrency expressed confidence in using it for political purposes.”

Additionally, The Clovr report found that “Overall, 73 percent of all voters who were knowledgeable about digital currencies believed security was not an issue when used for campaign donations.” Conversely, governments believe security is a major issue for digital currencies, but only a 26 percent minority of the voting public believe this to be the case.

The FEC states that campaigns must account for bitcoin donations in the amount that the currency is valued at the time of donation. The cryptocurrency market, however, is highly volatile and it is not uncommon for digital currencies to see wild price fluctuations over a short period.

For campaigns who are looking to accept and then cash out their digital currency donations to fiat currency, this may present a bit of a logistical nightmare, especially as it relates to accurate bid fund reporting. Interestingly, the public is split on this issue along party lines. Republicans believe that cryptocurrencies are stable enough to be used in political funding. However, Democrats and Independents were less optimistic.

Fifty-two percent of Republicans expressed optimism on the stability of digital currencies with only 40 and 35 percent for Democrats and Independents respectively.

How Would Crypto Affect Donations?

Donations to political campaigns have been growing steadily over the past few years as more Americans become more interested in the governance of the country. However, the report found that donations would increase if cryptocurrency donations were allowed. Political campaigns would see a 22 percent fold increase in funding from pro-crypto donators.

The political funding climate has changed much over the last decade with members of the public favoring online donations using their debit or credit cards. Additionally, most of the donations fall under the $100 mark. As a result of the changing preferences of the public, politicians and their campaign directors believe cryptocurrencies provide an easy way to donate small amounts and they should be included in the legal guidelines.

Twenty percent of Republicans indicated they would contribute more substantial amounts if cryptocurrencies were an option. Only sixteen percent of Democrats and 12 percent of Independents agreed. Most people, regardless of political party affiliations, still prefer to donate in fiat currency.

The Link between Crypto and Criminal Activity

While the public believes digital currencies are safe, secure, and stable enough to be used in political campaigns, they are not as secure in their belief that the campaigns, or any other relevant malicious actors, would use the funds in a legal and transparent manner.  The report states:

“Respondents were more concerned that candidates, political parties, and foreign governments would find ways to manipulate cryptocurrency donations than they were about cryptocurrency or blockchain technology.”

When asked if cryptocurrency donations would increase foreign interference in U.S. elections, 60 percent of the respondents agreed with Democrats showing the greatest concern for this issue.

Additionally, 56 percent of voters in the survey thought political parties would misappropriate political donations rendered in digital currencies. Interesting, an overwhelming majority of the public believed the GOP was most likely to misuse crypto funding. 90 percent of eligible voters thought the red-state party would misuse the currency. The Democrats came in at a close second with 83 percent. Libertarians and Green Party members were also untrustworthy, coming in at 63 and 60 percent, respectively.

Regardless of political party affiliation, the public believes politicians would misuse cryptocurrencies. Independents gave the highest response at 70 percent with Democrats at 66 percent and only 56 percent of GOP respondents agreeing. These findings are in line with recent reports that the American public has been losing faith in the political class and as shown above, have more to do with politicians as opposed to the technology behind bitcoin and other digital currencies.

To conclude, in a curious turn of events, the GOP is the party that is most favorable to the cryptocurrency sector. While the Republican party is considered more on the conservative side, it is the most progressive party concerning digital currencies. The report states:

“Consistent with our overall findings, [Republicans] are more comfortable with political cryptocurrency usage.”