The cryptocurrency market has fallen by large margins after UPbit, South Korea’s biggest cryptocurrency exchange and formerly the world’s second-largest trading platform, was raided and investigated by local police on May 11, 2018.

Raided, but Far from Finished

Investors still expect the market to recover swiftly in the short-term as traders move their funds to other international and local exchanges. 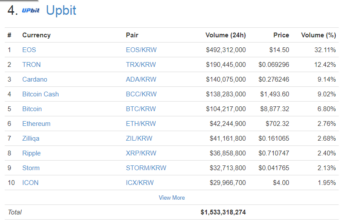 As BTCManager reported, UPbit was raided by ten investigators from the Korean Financial Intelligence Unit (KIU) and Financial Services Commission (FSC), along with local police in Seoul. The two-day raid, which resulted in the seizure of hard drives and audit records, led the local cryptocurrency market of South Korea to panic and triggered a domino effect across all major cryptocurrency exchanges as prices fell drastically.

Some reports from Chosun and Hani, two of the country’s largest mainstream media outlets, disclosed that the financial authorities found suspicious movement of funds from the cryptocurrency wallets of clients to the accounts of the company’s executives. Chosun also reported that the police alleged UPbit of committing fraud by deceiving its investors with an inflated balance sheet.

On May 13, 2018, two days subsequent to the announcement of an extensive investigation into UPbit, Ran Neuner, a producer at CNBC’s CryptoTrader, visited South Korea to offer coverage of the local cryptocurrency market. Anonymous sources told Neuner that the investigation revealed a liquidity issue between exchanges in the local market, which ultimately led the authorities to believe UPbit initiated an unauthorized reallocation of client funds.

“The irregularity being investigated is in regards to [the] liquidity issue. The issue involves sharing/ pooling liquidity with other exchanges. It seems to be that the regulators did not understand the share liquidity. My source (an employee) claims there is no issue,” said Neuner. He added that local investors are expecting the cryptocurrency market to rebound once the case is cleared.

“This selling is coming from people taking their funds out of Upbit as they are concerned. These people are crypto investors and won’t leave crypto — they will go to other exchanges and buy there. expect a huge bounce.”

On May 10, the South Korean police announced that the analysis of UPbit’s hard drives and audit records is expected to take two to three days and the authorities will be ready to release its final report as early as May 14, 2018. The UPbit team told its clients that its exchange would remain fully operational and it will cooperate with the investigation of the local financial authorities. As reported by the exchange:

“UPbit is currently under investigation by the prosecution, and we are working diligently. UPbit services such as all transactions and withdrawals are operating normally. Your assets are kept securely in your account, so you can rest assured that you can use UPbit services.”

The investigation into UPbit could lead to two potential outcomes: Local authorities discover evidence of fraudulent activities and the board replaces its executive team or as Neuner stated, the investigation ends with a simple liquidation issue and a bank mishap, which can be quickly resolved.

Both outcomes of the investigation do not lead to the loss of user funds nor the closure of UPbit, one of the global cryptocurrency market’s leading cryptocurrency exchanges. As such, the immediate reaction of the market towards the UPbit case can be considered an overreaction by investors and analysts in South Korea. As such, traders predict that the market will recover swiftly in the upcoming days.