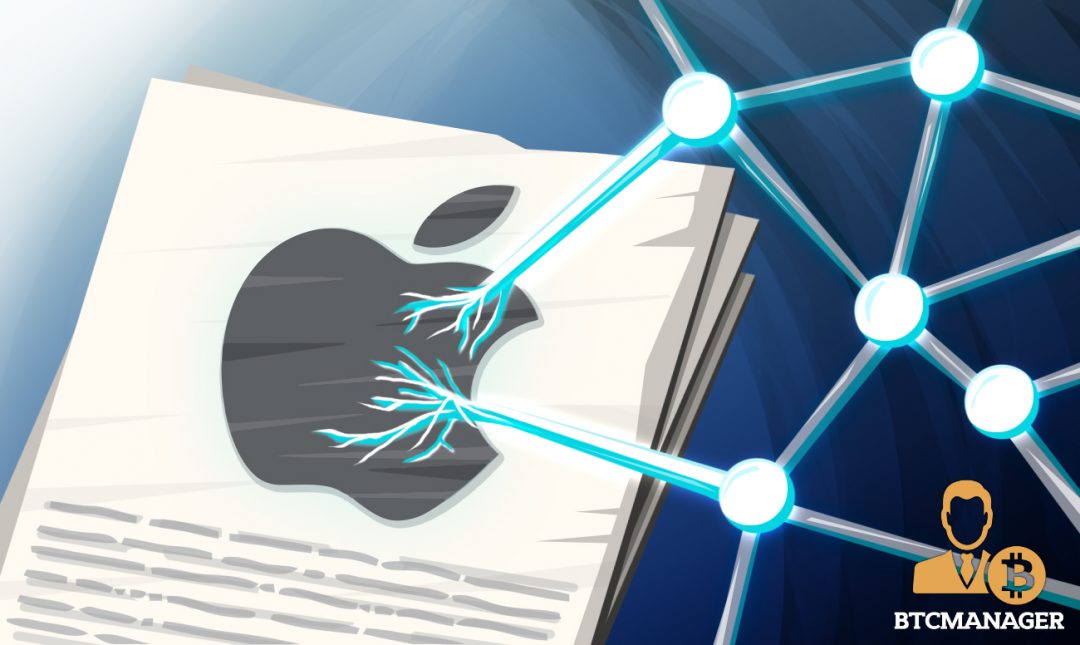 On December 7, 2017, Apple Inc, the American electronics giant, filed a new patent that details the use of blockchain technology in a proposed system to use a multi-check architecture for timestamp verification. Blockchain technology has seen a sudden surge in popularity, with governments and companies all over the world scrambling to unveil their vision of a blockchain-powered future. Apple’s patent is yet another step in that direction.

The patent, published by the US Patent and Trademark Office, demonstrates a program using “Public Key Infrastructure” (PKI) and a ledger-based data processing system. Apple’s patent goes on to describe a process in which a particular piece of information, along with a timestamp, is permanently recorded onto a decentralized ledger. Any subsequent changes or additions to that data will require a new block to be created, essentially preventing future modifications to existing records.

Apple’s patent application delves into three potential mechanisms to establish and store timestamps, with one of them relying heavily on blockchain technology. According to the patent, utilization of blockchain technology would incorporate the aspects of decentralization and security within the proposed system. Blockchains, first popularized by their widespread use in cryptocurrencies, have potential use in a variety of financial and non-financial applications for these very reasons.

The way blockchain technology achieves decentralization is by distributing a copy of its ledger to multiple computers over the internet. Each computer participating in this process is called a “node.” In addition to hosting a copy of the ledger, each node is also tasked with the responsibility of verifying any proposed changes to the blockchain. In the event that a modified blockchain submitted for verification does not match with the node’s local copy, the node will reject the change.

Several nodes distributed throughout the world are thus tasked with the responsibility of comparing and verifying multiple copies of a ledger. This exercise is commonly known as proof of work and is used by cryptocurrencies to keep track of transactions. For any change to be permanently recorded on the blockchain, the unanimous approval of all nodes is required. This means that even if a few nodes were to be hacked, the integrity of the data would not be compromised, conclusively making the entire system decentralized.

The patent application acknowledges that the use of cryptographic hashing and a blockchain would prevent data and timestamps from being altered or tampered with. It is important to note, however, that these benefits are not exclusive to Apple’s implementation and have always been strong selling points of the technology itself.

As is the case with most patents, it will probably be a long time before Apple actually ends up implementing blockchain technology into its workflow, if ever. Nevertheless, the patent application highlights a slow paradigm shift that blockchain has been bringing about for the past few years. Ignoring the multitude of cryptocurrency tokens and Initial Coin Offerings (ICOs) prevalent on the market today, it is becoming increasingly apparent that we will see the underlying technology truly revolutionize several industries in the near future.