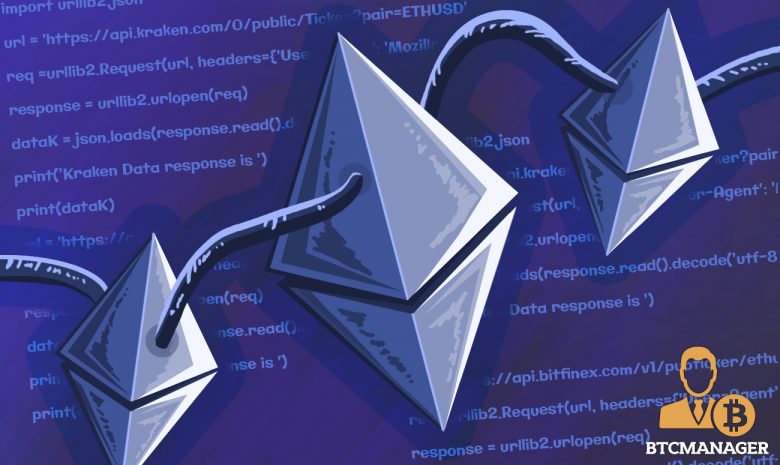 The amount of ETH locked in open finance applications broke its all-time high, with 2.37 million ETH – representing 2.19 percent of total supply – now locked in various financial protocols. Ethereum has been in the headlines a lot of late, as open finance and ETH 2.0 talks continue to spur rigorous debate and contrasting outlooks. BTCManager dives into the upcoming developments and potential synergies in play with dApps and ETH 2.0, October 28, 2019.

Scaling for the Present and the Future

Proof of Stake, sharding, improved execution environments; the new updates coming to Ethereum in the form of ETH 2.0 are massive in numbers and their potential impact. Vitalik Buterin estimates, depending on the execution environment using, ETH 2.0 will be able to offer throughput in the range of 5,000 – 500,000 transactions per second.

Ethereum is reliant on its dApps to give the ecosystem a value proposition and real-world use cases. Without a strong base layer that can process transactions for millions of users, and remain permissionless at the same time, Ethereum would remain a niche platform and could not scale for mass adoption.

Research on this front has been in the works for years now, and developers and technical researchers are finally on the cusp of implementing groundbreaking technology to the Ethereum network.

There are a few critical discussions regarding ETH 2.0 that have become a big concern for the community. One of them is the composability of open finance protocols with the implementation of sharding. The other is the rapid growth in the blockchain size. Vitalik’s recent research exercise helped dispel most concerns around dApps and sharding, while blockchain growth is still a relatively untackled issue.

Synergy in Open Finance and Ethereum

The recent price surge in ETH helped financial dApps gather more assets under management, and has overtaken the April 2019 high of 2.3 million ETH locked in these protocols.

Investment management protocols like Synthetix and Set Protocol would gain favor as ETH gradually bottoms out, but others like Maker and Compound thrive during ETH bull markets. As the price of ETH goes up, it becomes more profitable to take a DAI loan and pay it back. As more CDPs are opened and DAI is minted, supply for the stablecoin increases in the market.

On Compound and dYdX, the yield for lending ETH is incredibly low, near the 0.4 – 0.7 percent range. Staking will allow for yield between 1.5 and 18.1 percent on the Ethereum network, which will, in turn, increase rates on lending/borrowing protocols.

ETH 2.0 promises to bring mass appeal to open finance and the larger dApp ecosystem over the network. Only time will tell if these promises will hold up in the future.