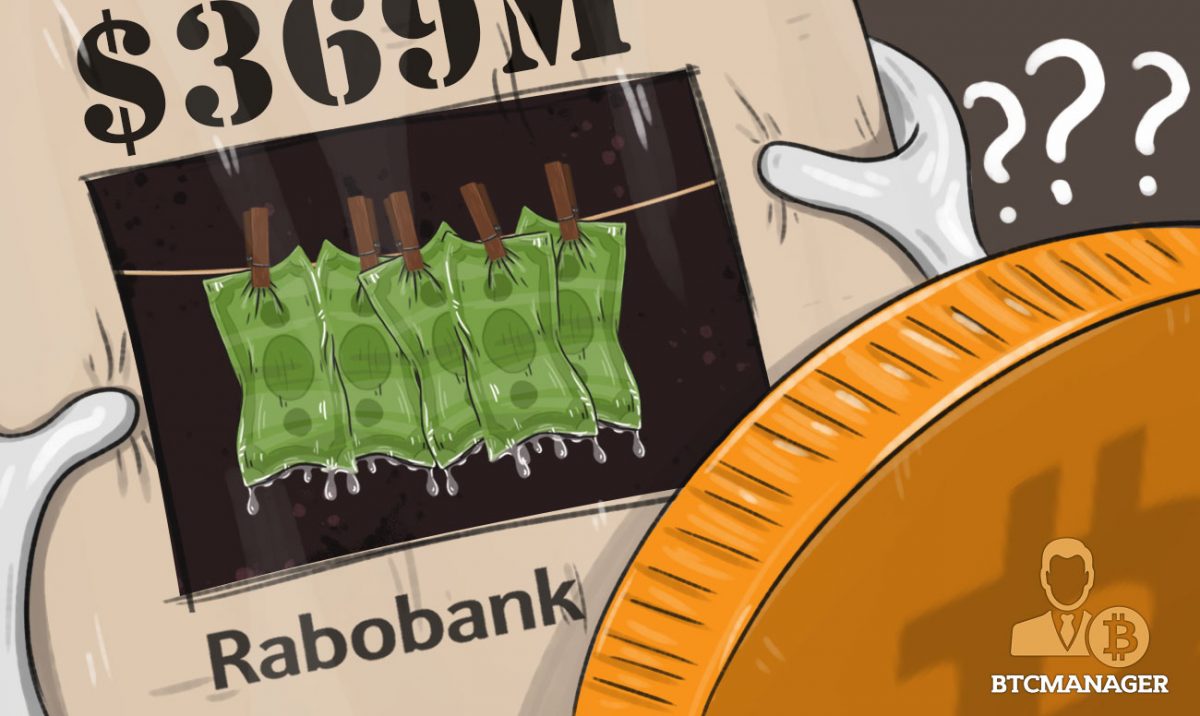 Just a week after publicly refusing to service businesses in the bitcoin and greater cryptocurrency industry, the Netherlands’ Rabobank was fined a hefty $369 million when found guilty of money laundering.

Rabobank was one of five Dutch banks which outright declined cryptocurrency-related bank accounts within their institutions, citing “too great compliance risks” as their underlying motivation. A spokesperson of Rabobank made the following statement when questioned on the matter:

“Bitcoins are considered to be risky products. Customers who trade in high-risk products can have a higher risk profile. It is conceivable that companies that deal with cryptocurrencies are seen as too risky and can therefore not be accepted as [a] customer.”

With that said, Rabobank is far from the first entity to show concern regarding cryptocurrency’s ease of use for money launderers.

“Ownership and value transfer are completely anonymous and evade supervision by third parties, such as a government. Which means that cryptocurrency does not meet the highest standards of compliance set by Rabobank.”

Toward the end of January 2018, the Canadian government voiced similar fears. Ironically, the banks “high standards” appeared not to include a code of ethics, as the bank subsequently pleaded guilty to money trafficking as part of the Mexican drug trade. The subsidiary in question was Rabobank’s California branch, Rabobank National Association.

After allegations of providing misleading information to officials and fabricating the truth when questioned on laundering linked to Mexican drug sales, the branch finally admitted guilt for their part played in the operation. Rabobank’s California unit confessed accepting an amount equal to or greater than $369 million between 2009 and 2012, from illegal drug-related activity that occurred during this period. Despite the above, it did not escape commentators of the cryptocurrency industry that great lengths were taken by officials to avoid custodial sentences.

Interestingly, in what can now be considered a somewhat tongue-in-cheek display by the bank, Rabobank’s website provides a starkly contrasting stance on cryptocurrency. Calling it the “future of payments,” Rabobank made the following statement emphasizing that it did not feel threatened by the new industry, and instead viewed it as an opportunity:

“We are seeing only the beginning of a new phenomenon that according to the experts and investors can be compared to the mid-1990s when the Internet took off. There are more and more user-friendly applications still to come. We see this as more of an opportunity than a threat.”

Prominent Bitcoin and blockchain speaker Sam Wouters tweeted the following on the incident:

Last week Rabobank refused #cryptocurrency businesses to open a bank account due to money laundering risks. Today they get fined, still make a profit and nobody goes to jail. What a circus. Hurry up #Bitcoin https://t.co/UD9oOmO7IL

And in another thread, a Reddit user /r/geezas also had a humorous opinion to add:

“[Rabobank is] technically correct to call out that bitcoin has potential to be used for money laundering. What they don’t say is that their motivation to call bitcoin out is because they don’t want extra competition in the money laundering industry.”

Rabobank is npt the first institution to publicly bash bitcoin, only to be found guilty of money laundering shortly thereafter. The same occurrence took place with Jamie Dimon and JPMorgan in November 2017.