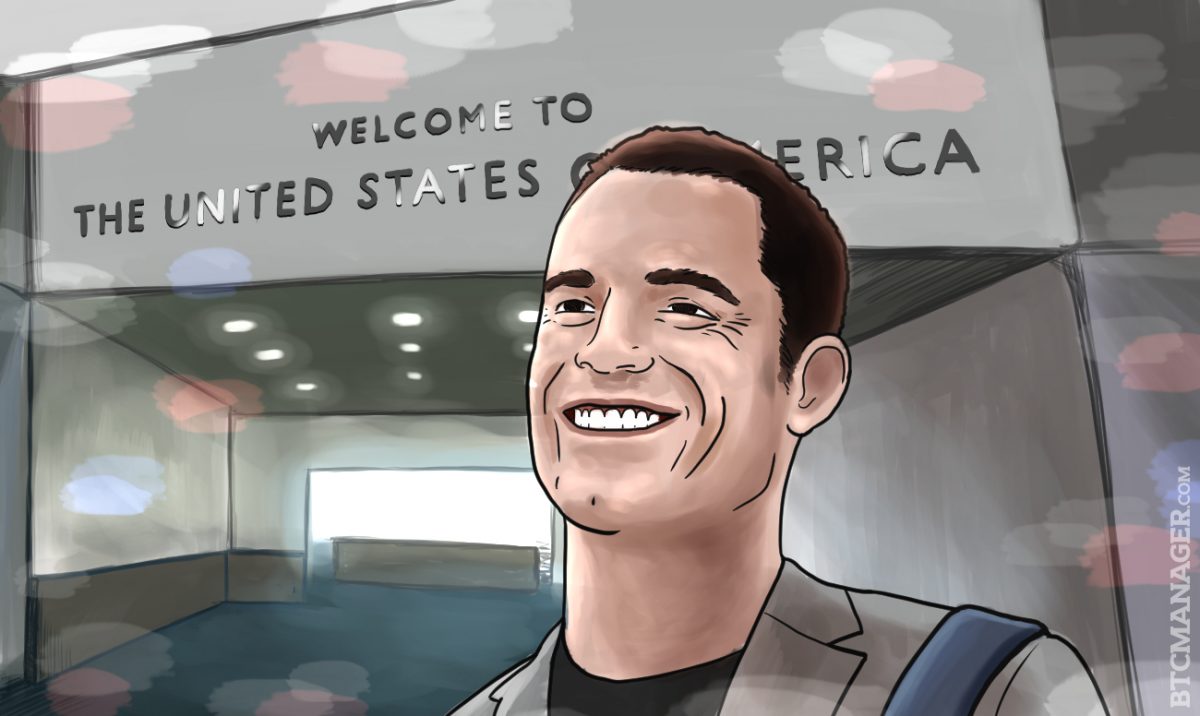 The “Mile High City” of Denver, Colorado was recently the site of an event featuring iconoclastic Bitcoin evangelist, investor and voluntarist Roger Ver. Co-Hosted by Liberty On The Rocks and Liberty Entrepreneurs, it was held at Southern Hospitality Restaurant, which has the distinction of being the first major restaurant in Denver to accept Bitcoin.

In front of a spirited group of liberty-minded Bitcoin enthusiasts, Ver unleashed 50 minutes worth of “no-holds barred” views on topics ranging from the current Bitcoin landscape, his struggles to gain re-entry to the U.S. after having been denied a U.S. visa, and his disdain for the name “Bitcoin Jesus” that many know him by.

Ver’s official home is now in Tokyo, where he migrated to in 2005 after serving a ten-month sentence in the US for dealing in explosives without a licence (AKA selling firecrackers on eBay). He also has a second home in Saint Kitts, a small island in the West Indies.

BTCMANAGER was in attendance at Ver’s event and was able to capture a few of his responses to a completely random collection of audience questions.

Erik Voorhees and I first met over six years ago. He approached me and said, “We really should talk. I think we’re interested in similar things.” As we all know Erik is really good at marketing and even back then he handed me the most memorable business card I’ve ever received. It had his name, phone number, email address and the caption “I’m friends with Satoshi.” That really got my attention and we’ve been friends ever since.

On the global Bitcoin community

I’m so grateful to Bitcoin. It has allowed me to make so many amazing friends. I think a lot of us were feeling a little bit alone in the world until we discovered Bitcoin and until we discovered this community of people who see the world so similarly. It’s so great to plug into this group of wonderful, like-minded people of the world. And I only think it’s going to grow from here.

On evangelizing about Bitcoin

Another point I have been saying for six and a half years that’s still pretty relevant today is that there is no official Bitcoin company and no official Bitcoin PR firm. So it’s up to all of us to tell our friends and family. The more people we spread bitcoin to, the more powerful the system is going to become, and the more useful Bitcoin is going to be for all of us, and the better off the entire world is going to become. All because we have this amazing monetary system that is on another level, far beyond what humans have ever had.

On renouncing his U.S. citizenship

I was born in California and grew up a U.S. citizen. Over ten years ago, I moved to Japan and I’ve been very happy there. At the time I moved to Japan, I considered renouncing my citizenship but didn’t actually go through with that until I discovered bitcoin. I realized that it was going to be really difficult to deal with all of the [U.S.] regulations and tax stuff. It was also going to be a bit dangerous as well, being that I was so early and heavily involved in this. So I thought that the safest path would be to renounce my U.S. citizenship.

On the trials of obtaining a visa to return to the U.S.

So you’re probably wondering how I finally got a visa and was eventually able to sneak back into the country after renouncing my citizenship two and one half years ago. At the time I went to apply for a visitor visa, I had been living outside of the U.S. for ten years. In applying, I knew that you had to show reason to leave the U.S. after a visit. So I brought a nice stack of paperwork with me showing all of my ties to Japan. The person at the U.S. embassy physically refused to allow me to slide this [documentation] under the window to review. They said to me, “We haven’t seen any proof that you have reason to leave the U.S. after your visit. We think you have secret immigrant intent,” meaning that I went to all the trouble and effort to renounce my citizenship only to now come back and live in the United States again as an illegal immigrant.

Eventually, I managed to convince them [the authorities] via a different embassy location that I was not planning to live back in the U.S. as an illegal immigrant. So they issued me a visa which now allows me to come and go from the U.S. at any time. Isn’t that how the world should work?

On his early exposure to economics

Somehow as a kid my hobby was studying economics, and the more economics I studied, the more in that direction I drifted. Because I wasn’t born an anarchist, Rothbardian or even a libertarian. When I discovered [the Austrian economist] Murray Rothbard, that’s really what pushed me over the edge. I can’t recommend his books strongly enough. They are really fantastic books and will help you see the world much more clearly.

Years ago I was listening to a podcast called Free Talk Live and they started talking about Bitcoin in relation to Silk Road. When I heard about how it was allowing people to buy things that others don’t want them to buy on the Internet I thought this must be a real interesting type of money. I went and Googled it and when I read about it and started to understand the properties of Bitcoin I thought WOW, people are going to start using this as money because it was certainly the best form of money the world had ever seen. So my first step was to buy some bitcoin. And my second step was to start seeding a Bitcoin startup business that would make it easier for normal people to use bitcoin. It’s been a wild ride for the past six and one half years but exciting times.

Security is one of the hardest aspects of Bitcoin at this point but there are lots of really smart software engineers that are working on wallets that are making it safe for people to use. It’s nice to now have so many choices. One good piece of advice [for Bitcoin enthusiasts] is don’t leave your money sitting on an exchange. It’s better to transfer it to a wallet where you control the private keys. Also, don’t keep all of your money in one wallet… spread it around among different wallets and computing devices.

On everyday use of bitcoin

On outside monitoring of the blockchain

I don’t think that there are outside authorities actively and personally scanning the blockchain. But I do believe that they’re paying other companies to do it for them. It is getting pretty darn worrisome in terms of just how good they are getting at being able to track bitcoin transactions on the blockchain. Hopefully some tools will be coming out in the future that will provide people with a higher degree of financial privacy with their Bitcoins. We’re looking at a couple of interesting tools on Bitcoin.com that will hopefully help with that. So again, this is one of my biggest fears at the moment. It’s important to keep in mind that bitcoin is not automatically anonymous. You have to be really, really careful in your use of it in order to have some privacy.

I would like to see Bitcoin adopt greater privacy tools and be able to integrate good privacy systems but at the the rate of advancement of the Bitcoin protocol itself and gridlock, I’m not all that optimistic that Bitcoin is going to be able to do that. That’s one of the reasons why I agreed to invest in ZCash. I think the more options and more tools people have the better. If it’s on Bitcoin, that’s great. If it’s on something else, that’s fine as well.

On the future of confidential bitcoin transactions

We need to try a thousand different things and see which ones do work. There is the Confidential Transaction project where you can hide a bitcoin transaction while it’s taking place. And if you combine that with CoinJoin and Coin Shuffle, then it makes it very hard to track and see what’s going on. There are also more altcoins that have more privacy built in. Dash has been out for a while. ZCash is coming out in September. Cross blockchain swaps are also pretty useful for this as well. The more experiments we try the sooner we are going to find ones that work really, really well.

On raising limits on the blockchain

That’s a giant can of worms there. One thing that should be considered by those who don’t want blocks to become bigger is that it was very, very clear directive from Satoshi that the ultimate long term solution was scaling through bigger blocks. In my heart, I don’t care how Bitcoin scales; if it’s bigger blocks or some other type of technology, that’s fine. But ultimately we’ll need to scale fast enough to keep up with the demand of people using Bitcoin and at this point we are falling pretty quickly behind. I feel like it’s mainly the newcomers to Bitcoin who are saying that we shouldn’t increase the block size.

On being referred to as “Bitcoin Jesus”

[Laughter from the audience] I am an atheist and don’t believe in a “Magic Sky Person.” I didn’t chose the name for myself and quite frankly am not happy at all about the name. The thing that bothers me the most though is when I see some people on the Internet referring to me as this “self-proclaimed” Bitcoin Jesus. First of all, I did not chose that name for myself. And I’m actually more than a little bit worried because things didn’t turn out so well for the original Jesus who was murdered by his government for being an activist.