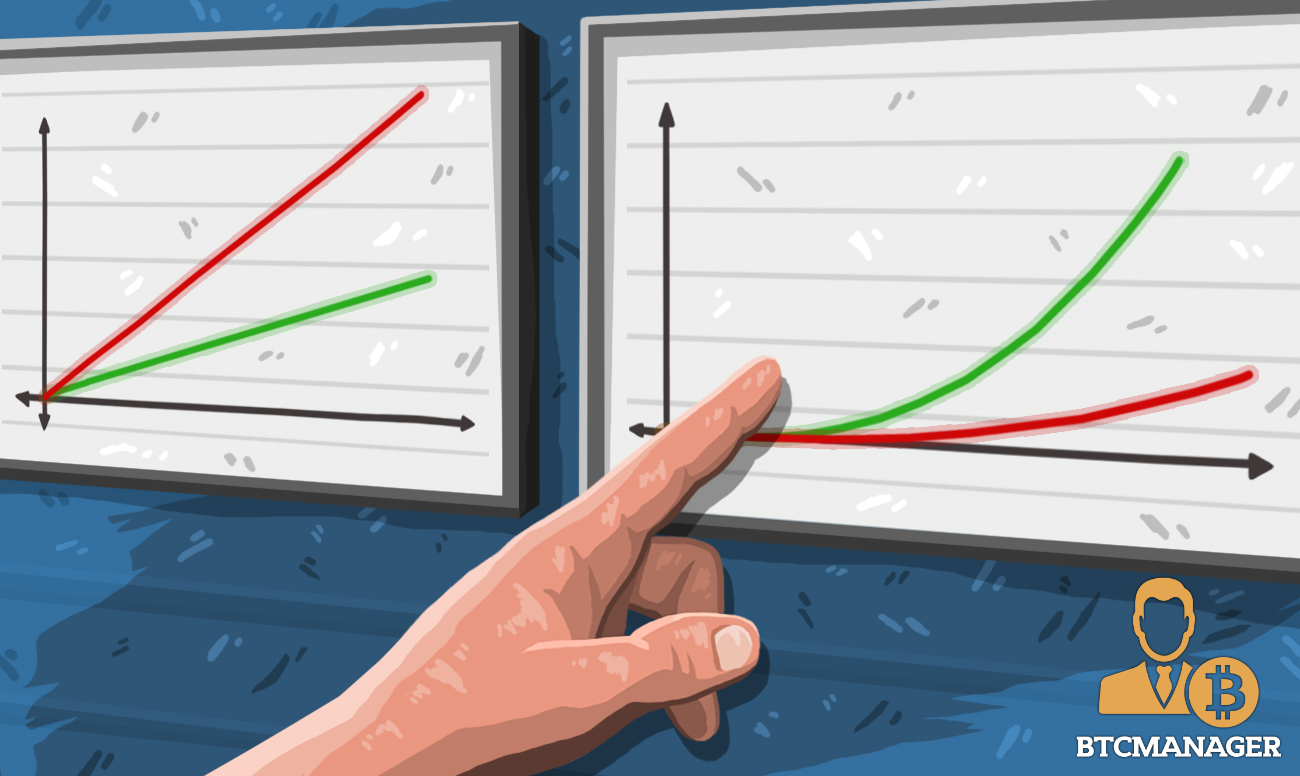 Recent years saw ICOs take the cryptocurrency world by storm as the go-to method to raise funds through crowdfunding. If you have the slightest degree of confusion regarding Initial Coin Offerings (ICOs), here’s a comprehensive write-up by BTCManager on ICOs.

Rampant ICO exit scams have marred the cryptosphere and bred a sentiment of hesitation among potential crypto investors. As a result, it won’t be too far-fetched to think that the ICO frenzy might observe a downward trend shortly, courtesy of steady rise of alternatives such as Secured Token Offerings (STO), and Token Bonding Curves, among others.

Paul Kohlhaas describes the relevance of Token Bonding Curves in Token Economy, exploring their core ideologies and protocols in depth while providing fundamental examples that could have been more seamless had the latter deployed the innovation.

This article will focus on one such upcoming form of token distribution; continuous token bonding curve, and give a thorough insight into their real-life application in the domain of intellectual properties.

What are Token Bonding Curves?

In straightforward terms, a token bonding curve aka bonding contract is a method of raising funds through utilization of buy and sell functions. For example purpose, we will assume ether (ETH) as the transaction currency for a making trade use of a bonding curve.

To buy a token of a new firm, an investor will have to make use of “buy function.” This function will automatically compute the average price of an offered token, such as ether. Once the amount of ether to be sent is known, the buying party triggers the transaction and exchanges its ether for a proportionate amount of offered tokens.

Selling a token through bonding curves takes the opposite approach, i.e., seller makes use of “sell function.” The selling party first specifies the number of tokens it wishes to sell to the buying party. The tokens must be ERC20 approved. Once the volume of tokens to be sold is fixed, seller triggers the function, which calculates the current average selling price of the token and the corresponding amount of ether is credited to his wallet.

Use of NFTs and TBCs in Intellectual Property Domain

Patents are nothing but the legal right of a single person or entity to use a breakthrough technology in an offered service or product for the foreseeable future without the risk of competition.

Patents provide a soft “exclusivity” over ideas and inventions to the creator, who can then make use of the said idea to reap exorbitant monetary profits for the coming decades. Some of the prime examples of such ideas are Apple’s patent for iPhone, a patent for a 3D printer, and the like.

However, with exclusive rights to use a particular idea in the real world, along popped up some unavoidable hurdles and loopholes for enterprises to milk the inventions. This led to economic phenomena such as monopoly, cartels, price gouging and rent extraction. Today’s open-source ecosystem makes the idea of patents look outdated.

To search for a real-world area where patents seem to dampen the competitiveness and tip the odds in favor of giant conglomerates, we need not look any further than the pharmaceutical industry.

The same can is relevant for any academic-intensive environment, which requires a lot of money to be invested in research and development, prototyping and testing. Not to mention that the majority of times the proposed products fail their initial tests and never even make it to market, wasting all the time, money and energy invested.

Now, compare this to an open-source development platform which incentivizes collaboration among investors and creators. The said platform also distributes risks and rewards through collective ownership. Also, the open-source nature of the platform will enable faster development cycle, i.e., research, testing, and feedback.  Lower prices for consumers and increased market competition is another upside to open development platform.

Remember, this article is a broad overview of the concept of token bond curves and their application in real-world scenarios. Hence, we will skip the extreme mathematical and economic technicalities and try to lay down the process in the simplest of terms.

That being said, let’s try to build onto the infrastructure that would make bonding curves useful in the world of intellectual property.

Step 1) Use of NFTs to Transfer IP Ownership

Every invention or idea usually has a single point of origin or brain behind it. Hence, it’s not impossible to fathom attaching an idea or invention to a single NFT (Non-fungible token). At its most basic form, a unique idea is nothing but a proprietary data within a fixed period.

CryptoKitties, an ethereum-based game is a prime example of NFT application. Surprisingly enough, the data structure of a new chemical compound or a breakthrough weapon technology is not too complicated compared to the color palette data of a virtual feline. So why not attach the IP data to a single NFT?

Once the IP has been attached successfully to an NFT, individuals can start trading NFTs. By acquiring a unit of NFT, a person owns a stake in the idea being promulgated into the market. Of course, this idea just like all other ideas will go through the long process of prototyping, testing, and feedback.

However, interested parties get to be a part of the community at a nascent stage, thus exposing them to a vast growth curve in the future, assuming the idea makes it to the market. Along with the scope of earning immense rewards, stakeholders are also exposed to the risks and other market uncertainties that come with the ownership.

Next, the NFT above is transferred under the supervision of a token bonding contract. This entails changing the owner’s address to that of the bonding contract. In laymen terms, any interested individual who wishes to buy the said NFT can send the collateral (Ether or any ERC20 token) to the contract address and receive the NFT in return. That’s it; you now own an NFT with an attached IP you trust.

How is the Price of an NFT Fixed?

To decide the price for any tangible or intangible commodity, market dynamics are of utmost importance. It is because of this implication that it makes sense to use an S-shaped curve.

A well-known S-shaped curve is the product life cycle. Until the maturity phase, the curve behaves like a typical S-shaped curve, after which it starts its downtrend signifying the decline phase. 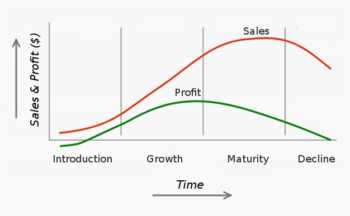 S-shaped curves are typically used to characterize a market that stabilizes after reaching an inflection point. Once the benefits and a measurable demand are established for a product, it becomes easy to assume stable behavior shortly.

In the case of the pharmaceutical industry, an increasing number of individuals join in the race as more and more encouraging news and positive test results come out in public. However, once all the information is disseminated through efficient market mechanisms, the curve shows a more linear and steady growth, coinciding with the time “laggards” enter the picture. This characteristic confirms mass commercialization and adoption of the said product. 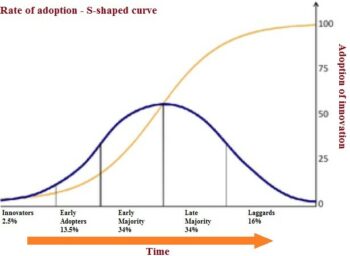 The End of the Curve

By now, many of you might be wondering what happens once the NFT cycle reaches the decline or end phase. In our case, it might happen once the drug gets FDA approval.

Once the token reaches the end of the curve, all the initial risks associated with it are removed, subsequently enabling the token to trade freely in secondary markets within a safe and predictable price net.

That’s not all. Owning a token with attached IP gives the owner a legal claim to the said asset and security. This means that token owners are eligible to receive royalties whenever the IP is used in the market. Not bad for a one-time investment.

Concluding, entry of token bonding curves and NFTs in the realm of intellectual property ownership has the potential to change the face of about every industry on the planet. Significant upsides such as minimization of risks, collaterals, and transparent funding model make NFT an attractive platform for open-source development.

Incentivizing ownership of bonding contracts and NFTs ensures that the power for R&D is not centralized within a single firm or company, but is distributed among all the optimists who see potential in the offering, thus doing justice to the very essence of the idea behind intellectual properties.