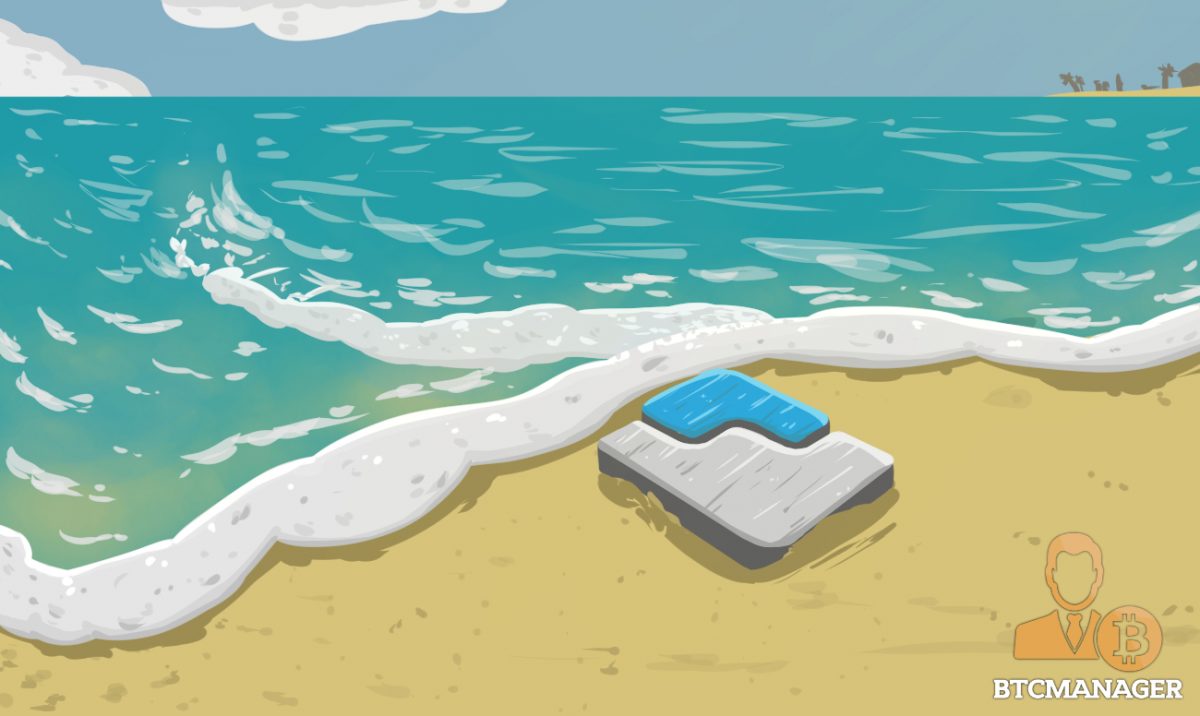 In early 2016, Russian theoretical physicist Sasha Ivanov proposed a new blockchain project that aimed to build on the success of the world’s first cryptocurrency bitcoin. Ivanov believed that the key to widespread adoption of blockchain technology, as well as the potential it holds, lay in making the technology as easy to use as is possible.

Up until that point, Ivanov had extensive experience working within the cryptocurrency space. The physicist had initially built his name creating the world’s first instant cryptocurrency exchange Coinomat.

The exchange was created on the foundation of the Nxt platform. Nxt is a blockchain platform that gave users the ability to create their own cryptographic tokens and to trade them.

Coinomat was well received within the community, but it was beset by challenges related to the Nxt platform, which led to its demise. The platform was unable to support a large number of users.

“It also had limits in terms of transaction volumes [as there] was only so much the system could handle, which meant businesses would not be able to grow on it,” Ivanov explained. Additionally, the Nxt architecture made it so that placing trades was expensive and impractical.

“It was slow – it was impossible to guarantee that a trade would occur in real-time – and it cost the user to place an order, not just when one was executed. Moreover, everything traded against the platform’s own internal currency, NXT, rather than one asset trading against the other.”

The final nail in Coinomat’s coffin came when Nxt’s developers updated the platform in a way that affected the projects that were based on it. The updates broke compatibility forcing the project to upgrade to the new software, which led to problems preventing the projects from functioning efficiently.

Ivanov concluded that “the developers were visionary, but they did not always understand what businesses needed. We could not risk impacting end-users like that.”

While the Nxt platform did recover and grow into a leading blockchain project eventually, Ivanov was determined to create a platform that would allow people to interact with blockchain technology easily. That is how Waves was born.

How Does It Work?

Waves is a blockchain-based platform that allows its users to create customized tokens in an easy-to-use manner. This customer focus is in line with Ivanov’s belief that more interaction with the technology would lead to a higher percentage of public adoption. The platform seeks to introduce a higher level of flexibility to the cryptocurrency space.

As explained in the whitepaper: “Custom tokens operations realized as an attachment to blockchain transactions are very flexible and can be used in a variety of applications, from national currencies transfer over the blockchain to decentralized trading.”

Founded in June 2016, the platform utilizes a proof-of-stake algorithm to achieve consensus. Because the project aims to positively impact the crowdfunding space, it is possible to write and deploy smart contracts on the platform.

However, in contrast to its competitor and the leading smart contract platform, Ethereum, Waves does not require contracts to be written in the programming language solidity. Waves is written in Scala. Moreover, it is possible to introduce plug-in extensions that seamlessly integrate with the software to better fit each users’ needs.

Using the Waves platform, projects that are looking to create their own token can do so quickly. Further, the platform differs from other similar platforms because users do not require any prior programming experience.

Launching a token on the platform is a matter of a few clicks through the user interface. Because the core functionalities are built into the platform, token launchers do not need to independently conduct an audit of the software since the platform has already verified this. This efficiency reduces costs and introduces a level of business security.

Once a token launcher specifies the rules of his token, it is created in a matter of seconds. Furthermore, launching a token is not an expensive affair, as is witnessed on other platforms. It costs only one WAVES token to deploy a token.

Once created, the token is immediately tradable on the decentralized exchange that is housed within the Waves platform.

On DEX, users also benefit from low fees associated with trades due to the peer-to-peer nature of the transactions. The fee is only 0.003 Waves per trade. In addition, the exchange provides the gateways to other fiat trading pairs.

The user interface of the exchange is similar to its competitors within the cryptocurrency space and provides the same trading tools and charts available on other exchanges. However, the most compelling feature of the DEX is its speed.

On December 22, 2017, the Waves team announced the rollout of Waves Ng on the platform. The upgrade implemented a change in the protocol of the blockchain, which was designed to result in a substantial increase in transactions per second.

The upgrade was based on a proposal put forth by Cornell University researcher Emin Gün Sirer that was designed to help bitcoin address ts scalability challenges. The paper named ‘Bitcoin-NG: A Scalable Blockchain Protocol’ outlined a new protocol that altered how blocks were added to the blockchain thereby affecting throughput.

Gleb Kostarev, a Waves team member further expounds: “Instead of pending transactions being added to a block retrospectively, as in bitcoin’s system, the next miner is chosen in advance. The miner is then able to add transactions to the block as fast as network latency allows — almost in real-time.”

This upgrade has resulted in the Waves blockchain being able to handle 6,000 transactions per minute. However, with further optimization, the platform aims to comfortably have the capability to make 1,000 operations per second. Though this is a lofty ideal, the platform currently boasts the title of the fastest blockchain in the world.

Explaining why the move was necessary Ivanov, said the following:

“As a platform of mass adoption, it is critical that we should be able to support a high throughput of transactions, whilst maintaining robust security. NG lays the foundations for our next phase of growth and a step-change in the size of the ecosystem we can support.”

The native cryptographic token of the Waves platform is called WAVES. The token supply is capped at 100,000,000 and was distributed through an Initial Coin Offering (ICO). The ICO raised 30,000 BTC, which, at the time, was among one of the most significant amounts ever collected in a cryptocurrency crowdfunding campaign.

The token has a market capitalization of around $500,000,000 and is ranked 28 on CoinMarketCap. It is currently trading at $4.79. On December 19, 2017, the token achieved its all-time-high, during the cryptomarket rally, peaking at $17. The token is available on leading exchanges as well as the core Waves client. 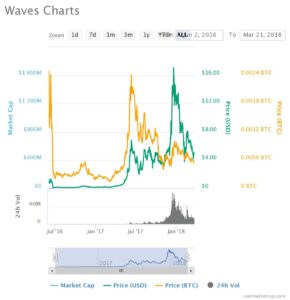 The market has positively received the Waves platform. Primalbase used the platform to issue a token which grants its users the ability to use their co-working space. The team raised about 3,000 BTC through a crowdfund hosted on the Waves platform. Moreover, Waves hosted the MobileGO ICO in 2017, which raised $53 million.

Tokens issued on Waves have a wide range of use cases. They can be used to represent fiat currencies, support political initiatives as well as be utilized as a payment method within a system. For instance: “Larry Sharpe has recently created SharpeCoin on the Waves platform to use as a means to engage activists in his campaign for governor of New York.”

The Waves team also provides an incubator to spur on innovation that can be beneficial to both the platform as well as the cryptocurrency space at large. The incubator, called Waves Lab, focuses on projects that are at the pre-ICO stage.

The incubator provides seed funds up to the amount of $300,000 as well as a wide array of different resources. Waves Lab helps the project set up their structure in a legal manner while providing access to other industry players known to the Waves team. In order to get accepted into the program, projects must apply for consideration.

Should You Add WAVES to Your Portfolio?

Waves is one of the most prominent blockchain platforms in the market and has consistently been able to innovative. It also has a sizeable community and a high standing among Russia’s cryptocurrency sector.

The positive developments of the Waves platform since its ICO and subsequent launch in mid-2016 have been reflected in the value of its digital token. Since inception, the value of WAVES has increased by over 2,300 percent.

Despite not being as popular as the likes of Ethereum, NEO or EOS, Waves is one of the most promising blockchain projects, and its token still has substantial upside potential if the Waves team continues to perform as they have done in the last two years.

Having said that, WAVES is a very volatile altcoin so overall exposure to this token should be limited compared to larger cryptocurrencies such as bitcoin and ether.