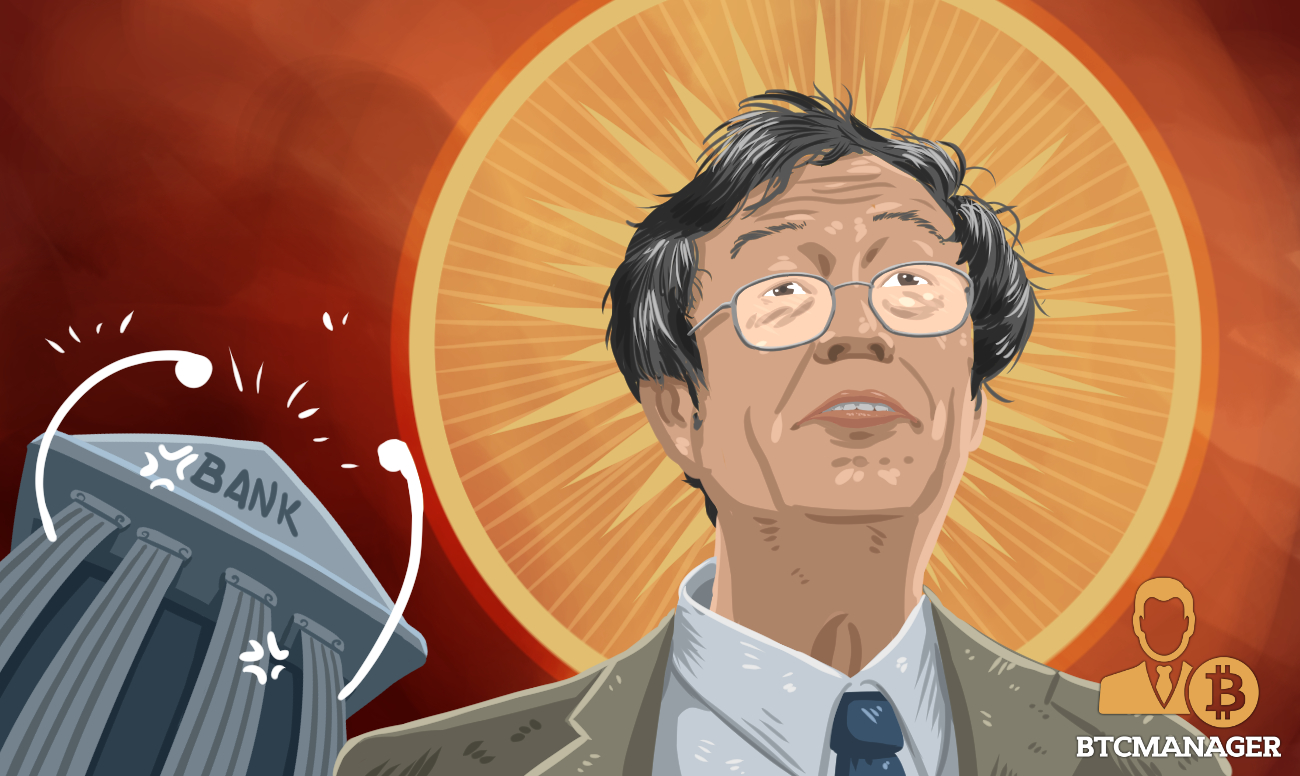 On April 9, the chief of the NYSE declared that crypto trading is an area that they cannot ignore, and stated that people trust the mysterious creator of Bitcoin, Satoshi Nakamoto, more than they trust the Federal Reserve (or ‘the Fed’), the central bank of the world’s largest economy. In this article, we answer the question, ‘why do some people trust an unknown person behind the leading cryptocurrency more than the US’s central bank?‘

History of the Federal Reserve

Let’s first start with the origin of the Federal Reserve. The central bank has only been in existence for just over 100 years and was created prior to the First World War in 1913. Despite the word Federal appearing in the institution’s name, there is nothing Federal about it. The central bank is, in fact, a quasi-private institution; although it has the word ‘Federal’ in its name, it also bears the word ‘Incorporated.’ The Fed is not subject to Freedom of Information requests, and some members of the board are not publicly elected, but rather are drawn from member banks.

The central bank emerged out of something called the Aldrich plan. The Aldrich plan was devised in response to market crashes in the late 19th/early 20th century. But it was also a plan to consolidate power in the U.S. economy. Paul Warburg was instrumental in the Aldrich plan, and as we detail further along in this article, he was also part of the military-industrial complex that helped to fund Nazi Germany.

“Picture a party of the nation’s greatest bankers stealing out of New York on a private railroad car under cover of darkness, stealthily hiding hundred of miles South, embarking in a mysterious launch, sneaking onto an island deserted by all but a few servants, living there a full week under such rigid secrecy that the names of not one of them was once mentioned, lest the servants learn the identity and disclose to the world this strangest, most secret episode in the history of American finance.”

If you thought the SegWit2x plan was bad, the creation of the Federal Reserve was conducted in a similar matter. A closed doors meeting between a select few would determine the trajectory of America’s economy for the next century.

On the other hand, Bitcoin was created as an open source project, meaning anyone can contribute ideas for the formation of a new monetary system. Bitcoin was also discussed on Bitcoin Talk, freely accessible to anyone with an internet connection, with the transparency in stark contrast to the behind-closed-doors initiation of the Federal Reserve.

A Century of War and Inflation

Another reason people do not trust the Fed is that throughout its existence, it has funded wars and consistently reduced the purchasing power of the average American.

By maintaining artificially high or low-interest rates, the central bank induces booms and busts in the economy according to Austrian Business Cycle Theory. When reducing interest rates below normal levels, malinvestment is encouraged, and the fresh money props up the economy, although only temporarily. Because savings are needed to finance investment, this means consumption must be foregone. However, with a fresh burst of dollars in the economy, consumption can be increased without the required savings, bringing the economy into disequilibrium, which is only solved with an economic downturn to restore the balance between production and consumption. In short, central bank interventions are the major cause of economic fluctuations.

The Fed has actively engaged in activities to increase the government’s expenditures during wartime to create and issue dollars in return for government debt. Some even go as far to argue that the extra dollars brought into existence that precipitated the Roaring Twenties, found their way into Nazi Germany as “private investments.” The most well-known American-backed company is IG Farben, linked to Paul Warburg, and the links between Prescott Bush and the rise of Hitler; Bush was director of Union Banking Corporation and had close ties to the Federal Reserve.

The Fed overvalued the government debt on its balance sheet at the time and in effect, devalued the US dollar to pay for the costs of war. In fact, economists Milton Friedman and Anna J. Schwartz estimated that five percent of the cost of the war was funded by inflation induced by the Federal Reserve.

Even ivory tower economist Paul Krugman argued that it is the US military that gives the US dollar value. This statement is not surpirising, if we think about the number of wars, both overt and covert, the US military has engaged in. Since cutting all ties between dollar notes and gold after 1971, the ability of the US to wage wars increased even more, as the central bank could expand the money supply more aggressively. If anyone tries to dethrone the US dollar as the primary payment for oil, they are taken out – see Saddam Hussein and Muammar Gaddafi, two leaders who wanted to replace the US dollar with the euro and gold respectively.

Even a historical account from the Fed’s own history page admits that the central bank’s primary goal was to support the war effort, and perhaps we can assume that their goal has not been entirely abandoned in order to support the value of the dollar (and in light of the recent move away from the Petrodollar by nations such as China, Iran, and Russia):

The chart below shows the value of a $1 Federal Reserve note since 1913, which is calculated to be worth just five cents in 2013.

While central bankers can expand and contract the money supply at will, bitcoin has been designed to act as a commodity, and supply modeled on the supply of gold. Only 21 million will ever be in existence and inflation falls over time, meaning purchasing power will not be ravaged as with fiat currencies. You can read more about Bitcoin’s monetary policy here, and can yield benefits as there is some certainty about the future rate of supply.

The Great Moderation: The Fed Pats Themselves on the Back

Below is a quote from former Fed chief Ben Bernanke that illustrates yet another reason why people do not trust the Federal Reserve:

“The policy explanation for the Great Moderation deserves more credit than it has received in the literature.”

The Great Moderation refers to the period of the 1990’s and early 2000’s when economic activity was expanding, and people were enjoying rising living standards. The chairman of the Fed at the time was in 2004 congratulating the Fed for overseeing this period of stable growth and prices.

Little did he know what was around the corner in 2007. None of the Fed’s economists forecasted or gave any forewarning of the Global Financial Crisis that was to hit the world economy in 2007-2008. In fact, there were only a handful of economists who predicted the crash that hit the global economy in 2008.

Similar to a newbie crypto trader who always buys the top and sells the bottom, the Fed is not deemed trustworthy thanks to patting themselves on the back after a period of economic stability, yet they failed to realize what was going to happen further down the road, and made no preparations for the eventual crash.

The Fed’s response to the Global Financial Crisis has also eroded confidence in the central bank.

“Throughout its nearly 100-year history, the Federal Reserve has presided over the near-complete destruction of the United States dollar. Since 1913 the dollar has lost over 95% of its purchasing power, aided and abetted by the Federal Reserve’s loose monetary policy. [….] The Federal Reserve can enter into agreements with foreign central banks and foreign governments, and the GAO is prohibited from auditing or even seeing these agreements. Why should a government-established agency, whose police force has federal law enforcement powers, and whose notes have legal tender status in this country, be allowed to enter into agreements with foreign powers and foreign banking institutions with no oversight? […] If the State Department were able to do this, it would be characterized as a rogue agency and brought to heel, and if a private individual did this he might face prosecution under the Logan Act, yet the Fed avoids both fates.”

In the same year the Libertarian politician called for an audit of the Fed, Bitcoin’s whitepaper came to life with the genesis block mined on January 9, 2009. Interestingly, we can view bitcoin and the Fed’s monetary policy response, quantitative easing, as two opposite policy prescriptions.

One was a bailout and a path to financial sovereignty for individuals who were fed up with the banking system, while the other was an attempt to keep the financial system going. Quantitative easing is an expansionary policy which ballooned the Fed’s balance sheet from $900 billion to $4.5 trillion between 2008 and 2015 and is an exercise in ‘trickle down’ economics, namely a top-down approach criticized by many leading economists.

By buying mortgage-backed securities and government debt, the Fed is acting as a lender of last resort and clearing the ‘toxic’ assets from the banking system. Many adverse side effects have been observed, including an overheated stock market, worsening inequality, and allowed companies to survive that would have otherwise failed under the free market and more natural interest rates.

On the other hand, bitcoin was designed specifically with bank bailouts in mind, as indicated by the post of Satoshi Nakamoto in the genesis block, “The Times 03/Jan/2009 Chancellor on brink of second bailout for banks.” Instead of a handout to big banks and corporates, bitcoin’s deflationary system could be suggested to be a policy response that would be accessible to everyone and provide the same advantages to individuals that are provided by the Fed to big banks. Conversely to the top-down approach of central banks, bitcoin is a grassroots, bottom-up movement, with an ambition for an entirely new monetary system and global economy.

By subscribing to bitcoin, you are betting against the traditional financial system, betting against crony capitalism, and the too big to fail banks. As the world continues with debasing the money supply, the leading cryptocurrency offers a way out for people who want to be insulated from the policies of central banks and the clumsiness and ineptness of elected and unelected officials. With bitcoin emulating the gold standard, if countries were to adopt this monetary system or something similar, the ability to use inflation and debt to fund wars would be severely hampered and business cycles could be tempered more effectively.