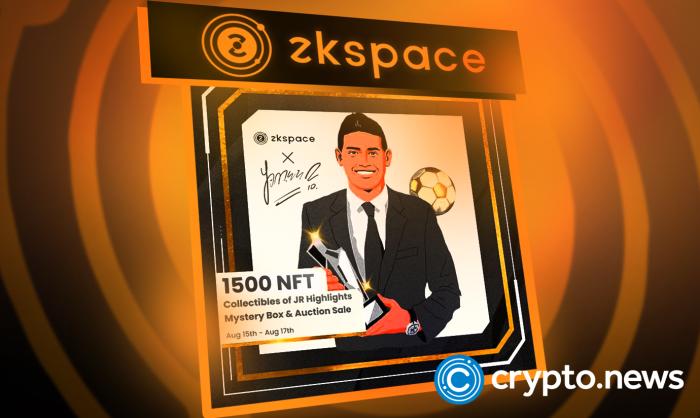 ZKSpace has announced that its James Rodríguez Zurda NFT collection public sale will go live on its dedicated digital collectibles platform ZKSea on August 15, 2022. The Zurda collection is made up of 1,500 pieces of exclusive and limited edition NFTs with four rarity levels depicting all the iconic moments of James Rodríguez’s sterling football career.

ZKSpace, in collaboration with the Colombian football star, James Rodríguez, has finally released the details of the highly anticipated Zurda NFT auction set to officially go live on August 15, 2022, on ZKSea, the dedicated digital collectibles minting center and marketplace of the ZKSpace ecosystem.

For the uninitiated, James Rodríguez is a 31-year-old Colombian football superstar that previously played for Real Madrid, Bayern Munich, and Everton FC. James has won multiple awards in his impressive soccer career including a Golden Boot during the 2014 FIFA World Cup, the 2014/15 BBVA Best Midfielder award, and more.

The footballer, on August 8, announced the public sale of his Zurda NFT.

The auction will begin on August 15, 2022, at exactly 7:00 am UTC on the ZKSea NFT marketplace. While all interested collectors can bid during the auction, each bid submitted must at least equal the last bid plus the bid increment.

The team says the Zurda NFT design was inspired by a total of 11 memorable moments, including James’ 2014 Puskas Award-winning goal and other great moments from his entire footballing career. The NFTs are all motion graphics digitally painted by professional artists.

Before making their first bid, Zurda NFT auction participants must first send an auction deposit to the platform and their account balance must be sufficient for each bid. No fees will be charged for non-first bids, the team says.

Importantly, the team has made it clear that the highest bidder at the end of the auction will be required to complete the payment within two hours and failure to do that will lead to forfeiture of the chance to purchase the NFT to the second highest bidder.

Ether (ETH) is the primary payment method for Zurda NFTs and participants are to ensure they have enough ETH in their Layer-2 wallet before placing bids. A step-by-step guide on how to transfer ETH tokens from the Ethereum mainnet to a Layer-2 wallet can be found here.

The Mystery Box Sale will go live on August 17, 2022,  at exactly 7:00 am UTC. The price of the Mystery Boxes is pegged at 0.15 TH and they contain Zurda NFTs in silver and bronze grades. Whitelisted participants will be able to purchase the mystery boxes for just 0.12 ETH.

To get whitelisted before the public sale goes live, interested participants must join the Discord community and follow the instructions in the James Rodríguez NFT channel.

While critics still argue that NFTs are simply overhyped and overvalued, these blockchain-based digital collectibles have continued to grow in popularity and even use cases. From sports clubs to athletes, down to leading brands across the world, NFTs are now a strong tool for marketing, fan engagement, and more.

Launched in February 2021, the ZKSpace (formerly ZKSwap) has successfully completed hundreds of function iterations since its creation and it remains one of the most secure layer-2 networks on the market.