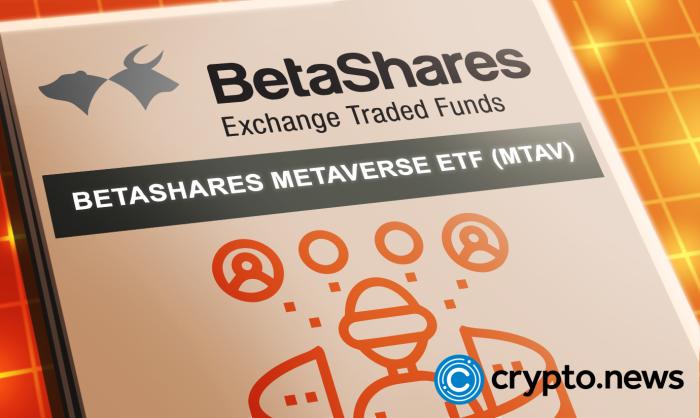 Popular Australian fund manager, BetaShares, has unveiled its first-ever large investment options involving some of the leading global firms in the metaverse project. From Meta to Nvidia, BetaShares exposed investors to leading players in the metaverse.

Moreover, the top companies BetaShares partners with have a track record in the development and operation of the metaverse space.

It generates revenues from its activities in the metaverse in partnership with firms like Nvidia, Meta, and Roblox. As per the company’s statement concerning the latest product, MTAV is the first of its kind in the country. With the new development, investors will have an affordable and convenient way to access a variety of global giants that have played a part in the expansion of the virtual ecosystem.

Moreover, the ETF also provides users with access to tech firms that have lent their support. Vitalik Buterin, Ethereum’s founder, has previously affirmed that the metaverse is a reality. As the virtual ecosystem evolves, consumers are expected to spend most of their time in the metaverse. Businesses are increasingly establishing their digital presence in the metaverse, according to BetaShares.

As Buterin opined, corporate efforts regarding metaverse development are at their lowest. And this has been a concern for many who want to see more corporate players get involved in the virtual world.

A Critical View of the Megatrend

The CEO of BetaShares, Alex Vynokur, revealed that the ETF launch will open the doors for what he called the “megatrends.” The metaverse is yet to evolve to the stages envisioned for it, and it has the potential to balloon into the next biggest growth trend in the years to come. Investing in the ecosystem is the best way to achieve these goals.

More than ever before, countries have been working on putting the metaverse project as part of the digital economic blueprint. And with developers working to ensure mass entry, analysts have predicted the metaverse will become a multi-billion dollar sector.

However, amid the convictions of many about the metaverse lies the criticism of others. The main criticism is fueled by the different versions of the metaverse on offer instead of a single one. And this means that it will be a different experience for users, contrary to what proponents were trying to explain.

Additionally, human conversation will be more physical than digital, and many people have expressed the limits to which they can afford to use virtual space.

As companies continue to invest in the metaverse ecosystem, critics point to the different versions of an alternate reality. In addition, there is also a limit to what consumers can do in the alternate universe.

Overall, whether the virtual world is the right approach or not will not deter the multitudes of fans looking to experience a truly immersive virtual reality.