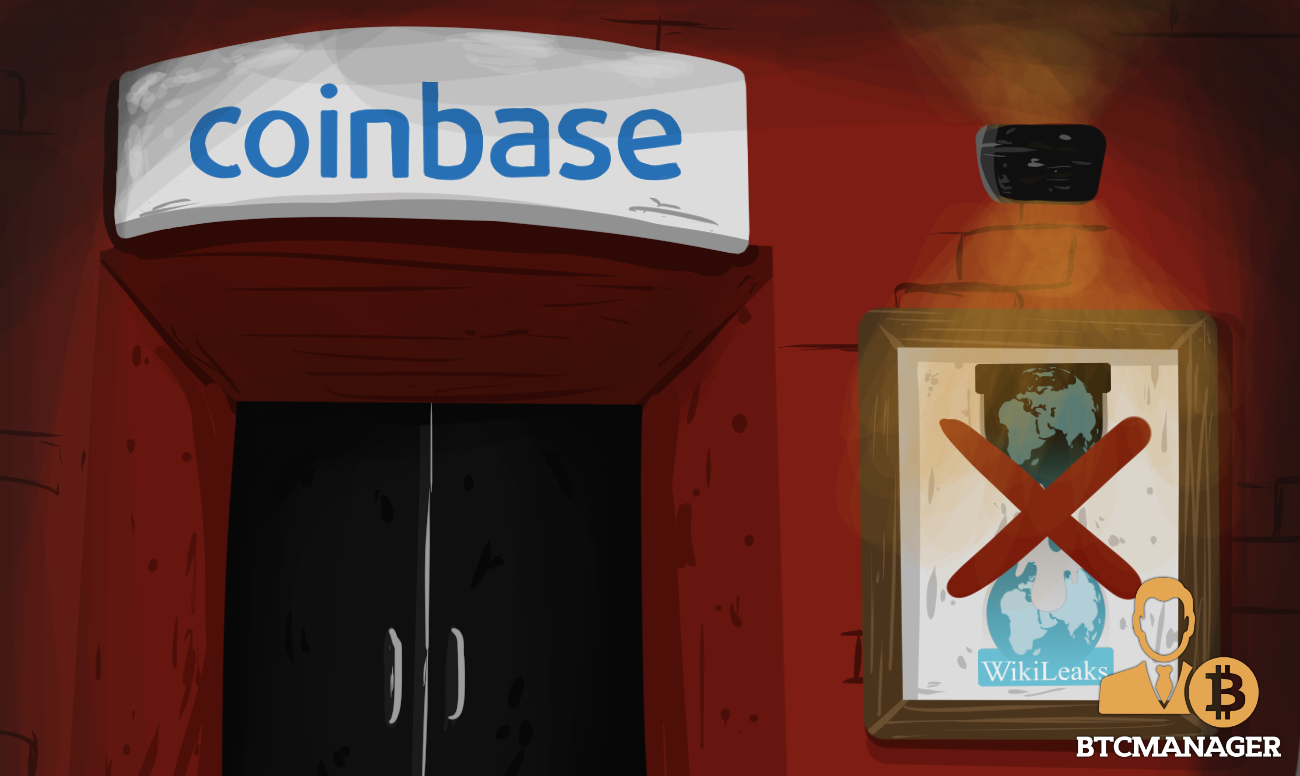 Following a recent move by Coinbase, the most popular bitcoin exchange in the US, WikiLeaks’ account will be discontinued without notice as announced on April 21.

In a tweet from the WikiLeaks shop’s official account on April 21, 2018, it was announced that the bitcoin exchange, Coinbase, had to discontinue the payment processing services without any prior notice or genuine reason they were taking such action.

ANNOUNCE: Coinbase has blocked the official @WikiLeaks shop from its platform without notice or explanation. You can continue to donate #Bitcoin to WikiLeaks at https://t.co/lvhoyhlqUa. #Coinbase #DefendWL #Cryptocurrency #Ethereum #BitcoinCash #ReconnectJulian pic.twitter.com/4BSS023OOk

In the same tweet, WikiLeaks also shared the content of the violation mail sent from Coinbase stating they believed Wikileaks had violated specific policies, not mentioned, which led to the termination of their service.

As an important organization for freedom of information, WikiLeaks has published thousands of government documents, including emails from Hillary Clinton’s private server that have brought the Clintons and the Democrats in the US under greater scrutiny. Many bitcoiners see Coinbase’s decision to terminate WikiLeaks’ account as unethical and against the ethos of Bitcoin.

WikiLeaks Calls for Boycott of Coinbase

WikiLeaks in a separate tweet from their official Twitter account unleashed their anger saying they were going to call for a worldwide blockade of the cryptocurrency exchange, saying they were not fit to be a member of the Bitcoin community:

WikiLeaks will call for a global blockade of Coinbase next week as an unfit member of the crypto community. Coinbase, a large Californian Bitcoin processor, responding to a concealed influence, has blocked the entirely harmless @WikiLeaksShop in a decision approved by management. https://t.co/PAldF8b12P

On the other hand, Andreas Antonopoulos stated that while he was ‘disappointed,’ he was not calling for such a boycott:

While I'm disappointed with Coinbase shutting access to Wikileaks, I'm not hating them or proposing any boycott.

Coinbase is the most bitcoin-friendly bank there is. Once you accept that they are a bank, it becomes easier to understand. If you need to use a bank, they're it.

WikiLeaks’ Julian Assange began to think about accepting bitcoin in 2010 after running into trouble with traditional payment processors and was eventually cut off from the legacy financial system following the publication of US diplomatic cables in late 2010. The organization received their first bitcoin donation on June 14, 2011.

The creator of Bitcoin, Satoshi Nakamoto, famously said in December 2010, “It would have been nice to get this attention in any other context. WikiLeaks has kicked the hornet’s nest, and the swarm is headed towards us,” following a PC World article covering the organization’s potential adoption of the cryptocurrency.

WikiLeaks is not the only organization affected by Coinbase’s recent changes in policy regarding ‘custodial’ solutions for merchants.

CheapAir, a travel booking website is yet another platform which was impacted by Coinbase’s recent decision. In a letter penned to its customers on April 20, CheapAir said that although they have been supporting bitcoin since 2013, the removal of custodial support for merchants by Coinbase has forced the service to look at altcoins:

“[Coinbase] are removing a number of the tools and features that we rely on to accept Bitcoin from CheapAir.com shoppers. These changes are scheduled to occur in a matter of weeks…”

CheapAir may opt for BitPay as an alternative platform and therefore asked its users what they think of the idea. As part of a solution, the firm is now testing bitcoin cash, dash, and litecoin as methods of payment.