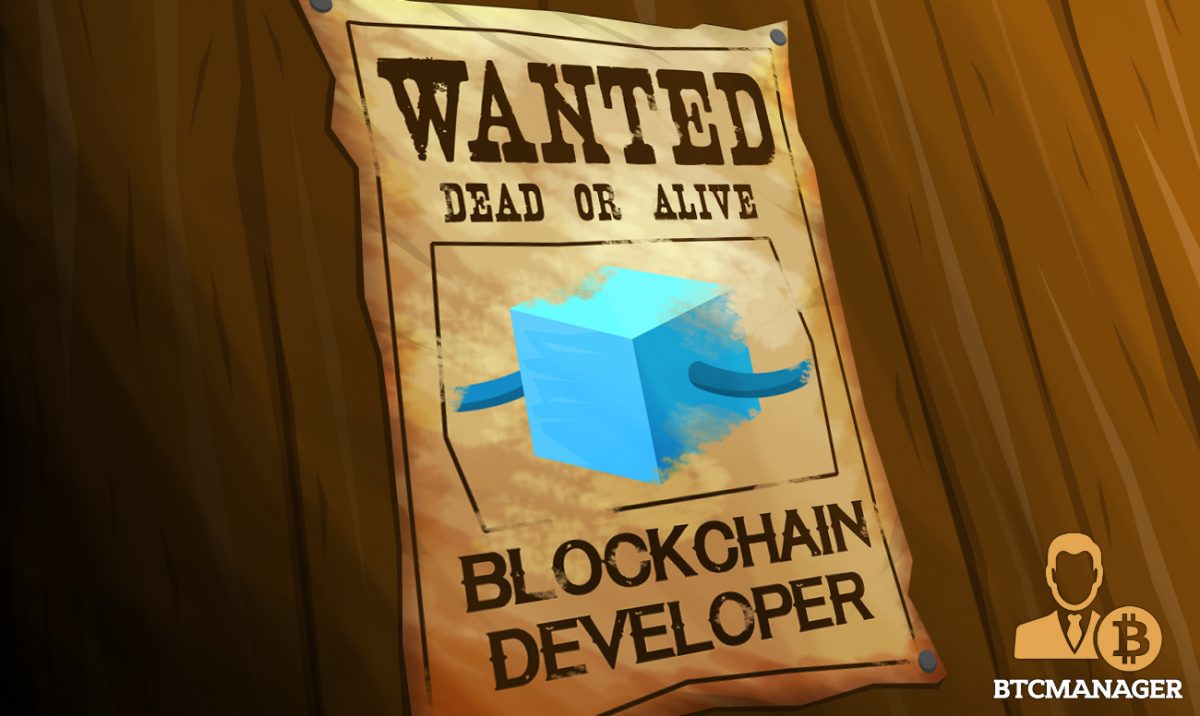 Blockchain developers are the hottest employment opportunity in 2018. Currently, the cryptocurrency community is proliferating but the production of new blockchain developers is severely lagging behind the rest of the growth. A slim talent pool and massive demand means sky high salaries for developers looking to make the jump into the new field.

What is the Blockchain?

The blockchain is a decentralized digital ledger where transactions are recorded chronologically and depending on the cryptocurrency, displayed publicly or not. This digital ledger was first created for Bitcoin (BTC) in 2009. However, over the last nine years, there have been many other developments in the sector. One major competitor is IOTA’s Tangle which looks to achieve the same immutable outcomes in a much different way.

Up until recently, BTC was considered as an outdated coin having the slowest and most expensive blockchain on which to transact, and thus turned to being used as more of a store of wealth (like gold) than anything else.

Since BTC’s most recent updates and forks, it is likely the view of BTC has shifted significantly. The pioneer currency may have been the first cryptocurrency to implement the blockchain, but the technology has progressed rapidly since its inception. Recently, the author looked in depth as to how best expose oneself to these revolutionary technologies without taking on the risk of owning actual cryptocurrencies.

The crypto asset learning curve is steep, but you need not pay anyone to teach you – the only investment required is time. There's a wealth of knowledge scattered across the Internet; a convenient index is available at https://t.co/POqNimM4uy

It would also be advantageous if they understood HTML and CSS to have a general idea about the different core technologies used in the World Wide Web. BTC’s source code, for instance, is in C++ and remains a favorite for blockchain developers.

Recently the demand for individuals in the blockchain talent pool has been soaring. Initial Coin Offerings (ICOs) raising capital in the United States have already passed the $3.7 billion milestone. This need provides an opportunity for all individuals connected with ICOs, predominantly blockchain developers.

Teams of different ICOs are always unique but what they all have in common are multiple blockchain experts. These experts form the core of the ICO while “expert” advisers and team members shape the face of the company. Each ICO needs blockchain talent specifically focused on their project. But with such a slim market of developers to choose from, coupled with increasing demand, salaries for developers have nearly tripled.

This ratio demonstrates that capital has far outpaced talent in the blockchain technology space.

Another critical point to highlight is that many ICOs and companies do not want multiple blockchain experts on salary as they are getting more and more expensive. What is developing is a world of on-demand talent or a circulation of the oft-cited “gig-economy.”

When tasks are generated that require a blockchain expert, an organization goes to an on-demand tech marketplace to “rent” the time to complete the task.

Toptal, for instance, is one of the most well-known, on-demand tech talent marketplaces. Toptal currently represents about 50 percent of on-demand tech engineering labor by total revenue.

Blockchain technology has the potential to revolutionize information security. As massive data hacks continue to happen, the war for blockchain talent will intensify. https://t.co/ukFcmqctdQ

Companies searching for blockchain talent are increasingly sourcing talent “on-demand” to accomplish short-term tasks while not having to pay long-term salaries.

Toptal has commented that since January 2017, demand for blockchain talent has grown by more than seven hundred percent. These numbers are impressive, but what is even more impressive is that forty percent of the projects currently listed require blockchain skills to partake in them.

By analyzing these figures, it is evident the blockchain job sector is growing as fast as the cryptocurrency’s market caps they help sustain. It does not seem the blockchain is fading but instead solidifying itself as a revolutionary technology.

An analysis of Toptal’s most requested fields sheds light on which strengths employers are most interested in. Hyperledger Fabric implementation was ranked the most sought after strength. With a proposed launch in the next few years, the technology is a focal point for many firms around the world.

The second is Ripple as employers want to ensure they are hiring a blockchain expert that understands the payment protocol and distributed process for remittances, payments and exchanges. The last most sought skill set is Solidity, which is a smart-contract programming language for Ethereum.

In the world of open source projects, sharing talent means the blockchain expert is no longer committed to one company but chooses to work on-demand for multiple companies when they are available.

The founder and Chief Executive Officer (CEO) of Toptal, Taso Du Val, has made many predictions regarding what he has witnessed on his platform. His predictions highlight his bullishness on the technology and its future applications and adoptions throughout society.

“Disruption will be in places like asset management or deals being made that require complex contracting. Payments are so complex, and to work at scale, require the sign-off of not just central banks, but also governments. Payments won’t come first. Contracts don’t need such a sign-off, since they are a lower barrier to entry. There are less regulatory hurdles, so we will see the contract space get disrupted first.”

Crypto was intended to decentralize the world’s flow of money, but it is not surprising that the CEO believes there will be earlier adoption as it begins disruptint the contracts’ space. While it may be easier to alter how contracts are created and transferred legally, regulations regarding international payments may not change as dramatically. This stagnation is solely because funds can now be transferred to any location for a fraction of the cost almost instantly.

Toptal is taking the blockchain career sector to the next level with their launching of the blockchain engineering talent vertical. This technology has just come out of private beta and is on the cusp of being launched publicly. The launch of a blockchain specific job platform will be a win-win for both employers and prospective developers.

The blockchain ecosystem will benefit from the exposure quality developers will have from being able to work on multiple projects simultaneously and to share their ever-growing knowledge base with their rotating teams.

The talent firm is going above and beyond in the sector as they feel blockchain engineers are integral to their success as a freelance company. They have co-designed a test and training curriculum with engineers in the blockchain sector that they intend to use to train existing engineers and programmers who are unfamiliar with the blockchain.

Each applicant is screened, and their acceptance is based on their breaching the top three percent ranking of engineers on the site. The demand for blockchain engineers is so significant it has driven Toptal to create their another career vertical along with a training regimen for existing engineers to become “blockchain certified.”

Upwork is another freelance on-demand talent website. The firm has commented multiple times regarding how “blockchain” rose to the fastest growing skill sought by companies out of a total of five thousand total skills. Regarding freelance billings for those that have blockchain in their repertoire, there was a year over year increase of thirty-five thousand percent (35,000 percent).

These numbers are not specific to blockchain architects but include blockchain consultancy and ICO advisory services as well. The entire blockchain sector is growing at a rate that outpaces every other market currently.

Conclusion: The Blockchain is Here to Stay

It is incredible that individuals still doubt cryptocurrencies and blockchain technology. Of course, scam coins still float  among the fifteen hundred coins out there, but there are also companies that get in trouble for scams and fraud all the time out of the thousands listed on the U.S. and foreign exchanges.

The capital flowing in even after the occasional scare far outpaces the current talent pool available to fill requested positions. These employment opportunities range from consultancy positions, engineering, coding, to advising  ICOs.

Blockchain technology is the economic revolution of our current generation. The capital flow from companies and ICOs shows society is not fighting blockchains adoption but is rapidly trying to catch up.