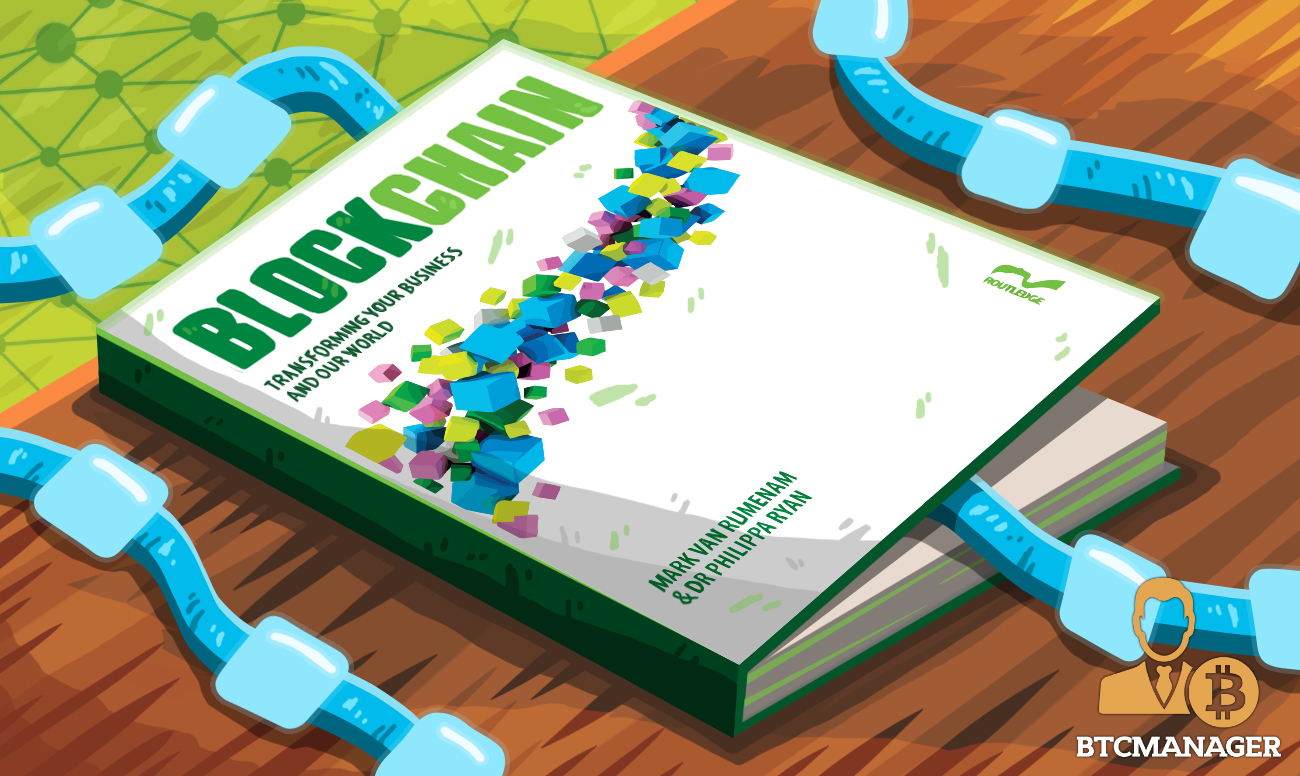 Mark Van Rijmenam is the founder and CEO of Datafloq, an author, and Keynote speaker in artificial intelligence (AI), blockchain, and big data from the Netherlands.

Named one of the global top 10 Big Data influencer and one of the most influential blockchain speakers, his latest book presents a comprehensive view on how blockchain technology can disrupt the world of today and how it can be used as a solution for many of the world problems.

About the Book – Blockchain: Transforming your Business and our World

The book discusses the idea that blockchain technology offers a solution to many of the world’s problems. It can fight corruption and fake news; it can help prove identity; help fight problems and conflicts arising from climate change. The book presents an inclusive view of how the blockchain can solve for the United Nations Sustainable Development goals as well as being used as a tool to fight climate change.

The book goes far beyond what the blockchain can do for financial services and economy. It matches the technology with a series of social problems which can be solved with the use of the technology backing many of today’s top cryptocurrencies.

BTCManager got together with Van Rijeman to explore his view on how distributed ledgers will impact the world.

BTCM: When did you first hear about blockchain technology and cryptocurrencies for the first time?

Mark: I think it was about three or four years ago. Every year I write a trend for the next year and the first time I wrote about the blockchain was either in 2014 or beginning of 2015. And then, almost two and a half years ago, I moved to Australia to do a Ph.D. which initially was focused on the accommodation of big data and design thinking. Then I got involved in a blockchain workshop which was organized by my university, and I learned more and more about the blockchain, and that’s when I really saw, ok, this is game changing, this is a paradigm shift. I then changed the direction of my PhD, and I got together with Philippa Ryan to discuss how we could do something with this and the book is the sum of that.

What led you to write a book about blockchains?

In your book, you speak about Identity verification using the blockchain. Can you talk a bit more about that?

The way we determine identity is the first problem we need to discuss. It’s because it’s the first problem we need to solve if we want to resolve all the other issues. Keeping that in mind, we needed to establish a new system which is called the Self Sovereign Identity and the way we went about that was to first go back to what identity really is.

We interviewed a lot of organizations and a lot of people with knowledge in the field and in the end we came up with the idea that Identity consists of mainly three things.

Secondly, identity consists of reputation which refers to how you behave in the world and if you do what you promise to do and things like this. This also goes for organizations.

Shadow reputation is a fundamental concept when we talk about Identity. So we have attributes, reputation, and shadow reputation that together make up your self-sovereign identity, and once you have that in place, then you can start to look at the other problems we discuss in the book.

You also speak about how the blockchain can help the IoT and AI? Can you comment?

I was right in the process of writing my new book which is about how big data, blockchain, AI, and the combination of the three are sort of the Holy Grail for the organization of tomorrow.

Basically how it works is, you use big data or data to “datafy” your organization and to collect all kinds of information which help to improve the efficiency of the organization. You then use a blockchain to either distribute or decentralize your data which enables you to collaborate with industry partners. Once you do that you can have a better provenance of your data which implies better data governance.

Once you have that you can better analyze the data using predictive and prescriptive valid data to get insights from your business which you can then automate using artificial intelligence. With IoT, you can better trace your data and how it has moved along in the supply chain if you transport perishable goods and the goods have to be in a certain temperature.

All the characteristics of big data, blockchain, and AI enable organizations to be much more effective and efficient with their data.

Are there many companies trying to create something in line with this?

There are a lot of scams going on, unfortunately; which is a real shame because it ruins the market for those organizations that are trying to present something. That’s sort of why I’m a big proponent of having regulations for ICOs. Ideally, these regulations are set in place on a global scale, but I know that this is tricky.

Do you think regulations can stifle innovation or that regulators are already on the right track to put together a framework that actually works?

I think that what we need is global regulation. A cryptocurrency blockchain is decentralized, meaning that it can operate cross-borders, meaning that it is global. And having nation-dependant regulation doesn’t work for this, because if one country prohibits it, you just go to the next country, which also makes it very difficult to stop.

We have seen that in China they’ve had a tough time blocking it. What we need is global regulation, but another challenge is that these countries don’t all agree with each other all the time. But if we want to get this right, and we don’t want to stifle innovation, I think the best way to go is to deal with this in a supranational level.

Do you think that local regulation would only stifle innovation right? Do you agree with that?

For some countries that are very much in favor of blockchain technology and cryptocurrencies they are now developing the first regulations. For example, Malta and Switzerland they are doing a lot of things to regulate the market, and with that, you see that they are already benefiting from that.

There is also a lot of reference to IOTA and Ethereum in your book. What do you think about these two projects?

They are both interesting projects, they both have quite a following behind them. They are different projects; one of them is a blockchain, and the other one is a DAG (Directed Acyclic Graphs), so from that perspective, they are technically different. I think they are very interesting, but they are still at their very early stage.

It’s still in its infancy, so we cannot expect wonders from technology this early. That’s what you see with both platforms; very promising both, but they need to get it right, and that’s a challenge because it’s technically complicated.

In your book, you mention voting and the electoral process and how blockchain technology can disrupt this process. Do you think that governments would be interested in this?

It’s interesting because for governments it’s still a challenge. As an example, in the Netherlands, a report was written by some academics who said blockchain was not suitable for elections a couple of months ago.

I didn’t really understand why that was said. And then when I read the report, I saw that it was full of mistakes, so that made it clear why it was being said.

Maybe it is, and it gives the power to the voter. In the book, we talk about liquid democracy which is sort of the holy grail of democracy. But I don’t think, as I wrote in the book, that will ever happen because that would mean that those in power at the moment would lose their power by doing so.

That’s the challenge we face with voting on the blockchain. Of course, we can make small steps, and it can be used in organizations in their general members’ meetings, and there are a lot of things we can do right now, but a genuinely liquid democracy somewhere in the world at some point in the near future, I’m afraid that’s too optimistic.

Can you tell me about Datafloq?

Datafloq is a content platform around emerging technology. They run four hundred offices around the globe and write on a regular basis anything related to emerging technologies. From big data, blockchain, AI, internet of things, and technical articles.

It’s a community where there are a recruiting platform and a meeting index, and there’s a vendor index, it’s a one-stop storage for content around emerging technology.

Is it only a conventional platform? Is it using the blockchain technology as well?

Not yet. We are about to release a beta version which will use the blockchain, in fact, we will use IOTA. And we are launching a browser plug-in which enables users to rate articles. It will give authors a reputation which then they can use to be rewarded with tokens when they blog on Datafloq. What we are creating is sort of an IMDB for articles, and hopefully, we’ll launch in the next couple of weeks.

When do you think we will be seeing the next significant development coming from the blockchain sector? Do you think this will happen within ten years or less?

Mark: You can see that developments in the space are going really fast and everyone is building on top of each other which I think is a great thing. If you understand how far we have come the past ten years since the Bitcoin white paper, I think we have done well. And I think that in the coming decade, we will continue to see tremendous progress.

You already see the first blockchain applications and the first proof of concept being developed and being implemented. I think that in five to ten years from now we have made significant progress and I think it’s becoming an increasingly more substantial part of our lives.

We have also seen some failures like the DAO hack or CryptoKitties. Do you think that these sort of failures are part of the technology development?

Cryptocurrency may become an irrelevant application, but a lot of people use it, and we can learn from it.

There is an increasing demand for blockchain specialized professionals. Regarding education, do you think that we are on the right track?

Education is a challenge because as we said, the field is so new and universities need to take the time to develop good courses. It is a matter of time before universities create classes that will educate the engineers and developers that we need to build this. That will take time. It was the same thing with big data. It took a long time before we saw big data education and data scientists’ specific education, so I think the same thing with blockchain. It will take time, but it will get there.

Blockchain is undoubtedly a technology that will be an important part of the future. Up until now we have only seen the innovation successfully used in cryptocurrencies.

Now, blockchain technology is set to be introduced in almost everything. Van Rijeman’s book presents a whole new set of ways where the technology can be used for social good.